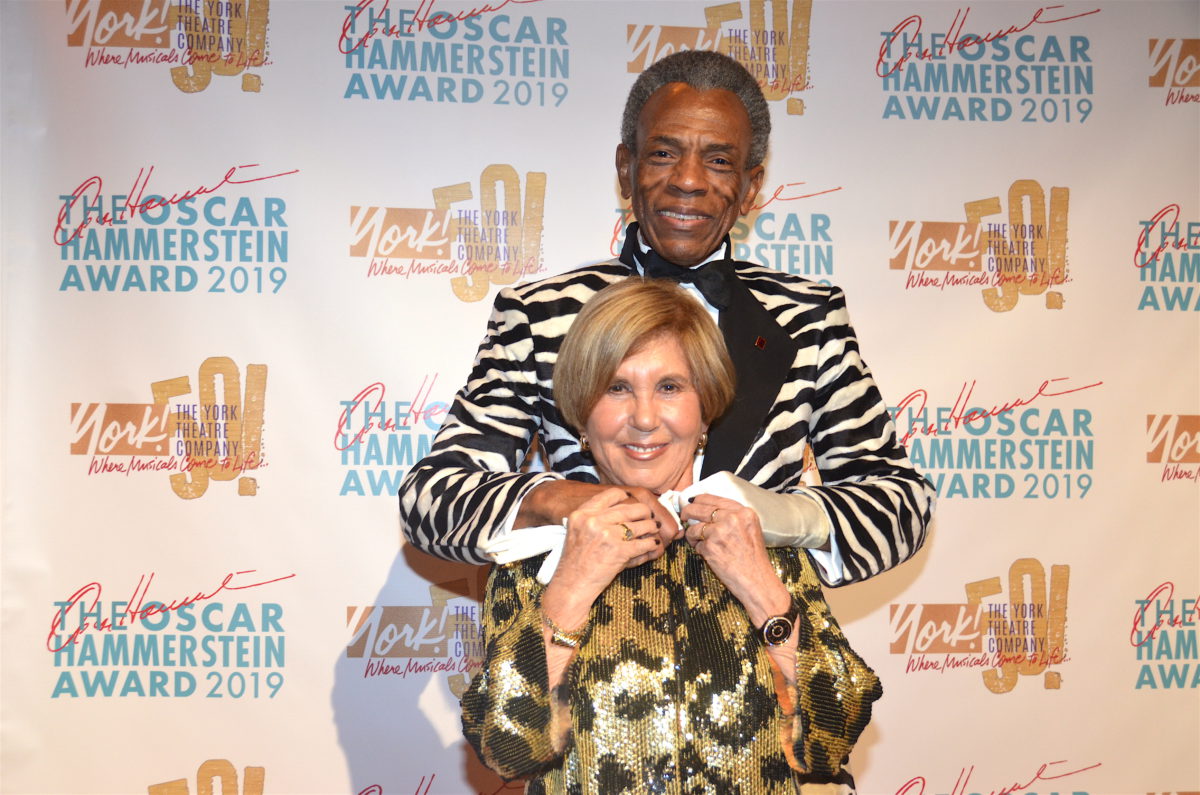 The Reception began at 6:00 p.m. followed by a concert and award ceremony at 7:30 p.m. Michael Ungerthe the York’s former Associate Artistic Director, recently appointed Artistic Director of Skylight Music Theatre in Wisconsin staged the evening’s celebration with the music direction of Eric Svejcar.

The Oscar Hammerstein Awardis named in honor of the legendary lyricist and librettist who helped shape American musical theatre through his collaborations with a number of different composers and writers. His contributions to such landmark musicals as Show Boat, Oklahoma!, South Pacific, and Carousel are a legacy for all time. The award was created in 1988 by Janet Hayes Walker, Founding Artistic Director of The York Theatre Company, with the endorsement of the Hammerstein family and the Rodgers and Hammerstein Organization. Its purpose is to recognize significant lifetime achievement in musical theatre, and it is presented at a gala evening held for the benefit of The York Theatre Company.

André De Shieldsis the triple-crown winner of the 2019 awards season, having won the Outer Critics Circle, Drama Desk and Tony Awards as Best Featured Actor in a Musical for his unanimously critically acclaimed performance as Hermes, Messenger to the Gods, in Hadestown. The Actors’ Equity Foundation followed suit with the Richard Seff Award, which honors veteran stage actors’ best supporting performances of the year. Prior to his Tony Award win, Mr. De Shields was best known for his show-stopping performances in four legendary Broadway productions: The Wiz, Ain’t Misbehavin’ (Emmy Award), Play On!, and The Full Monty. In a career spanning fifty years, he has distinguished himself as an unparalleled actor, director, and educator, receiving in 2018 the 8th Annual Off Broadway Alliance Legend Award, and the 33rd Annual Bob Harrington Life Achievement Bistro Award. Among his other accolades are the 2009 National Black Theatre Festival’s Living Legend Award and the 2007 Village Voice Obie Award for Sustained Excellence of Performance. On August 19 of this year, His Honor Mayor Bernard C. “Jack” Young presented him with the Key to the City of his hometown, Baltimore, Maryland. Mr. De Shields is a proud member of AEA, SAG-AFTRA, and SDC. www.andredeshields.com

“André De Shields is a true man of the theatre, and it is a glorious coincidence that he began his career in 1969, the same year that The York was founded,” said James Morgan, York’s Producing Artistic Director. “We can’t think of a better way to honor his fifty years in showbiz than with the Oscar Hammerstein Award for Lifetime Achievement in the Musical Theatre. We are ecstatic to honor him for a career as performer that began with Hair and wound its way through Ain’t Misbehavin’ and into the current Hadestown, with detours into writing, directing, choreographing, and teaching. Nobody is more deserving.”

The York Theatre Company Founders’ Award recognizes individuals who have made a significant impact on the sustainability of the Company, and of the arts. Past recipients of the award include Janet Hayes Walker, the Founding Artistic Director of the York, W. David McCoy, Sarah Tod Smith, Molly Grose, Robert Goldberg, Gerald F. Fisher, and Betty Cooper Wallerstein.

Riki Kane Larimer (Producer) hails from the world of housewares where her company, Metrokane, created and marketed the famous Rabbit Corkscrew. After selling Metrokane in 2014, she embarked upon a career in theater, where she co-produced the London production of Memphis followed by On the Town and Gigi on Broadway, the Off-Broadway productions of Georgie and Bright Colors and Bold Patterns, and The York Theatre’s productions of Cagney and Enter Laughing. Riki’s major theatrical accomplishment is the widely- acclaimed production of Cagney starring Robert Creighton, which started at The York, followed by a run at the Westside Theater, a stunning 15-month success, and most recently had an expanded developmental production at The Pioneer Theatre Company (Salt Lake City, UT). She looks forward to bringing Cagney to The Great White Way. Riki is the Vice President of the Board of Directors at The York Theatre, and is a trustee on the Board of Bay Street Theater in Sag Harbor on Long Island.

The York Theatre Companyis the only theatre in New York City—and one of very few in the world— dedicated to developing and fully producing new musicals and preserving neglected, notable shows from the past. For over four decades, York’s intimate, imaginative style of producing both original and classic musicals has resulted in critical acclaim and recognition from artists and audiences alike. Under the guidance of Producing Artistic Director James Morgan since 1997, The York has focused on new musicals in its Mainstage Series—most of them world, American, or New York premieres—by some of the field’s most esteemed creators and has also helped launch the careers of many talented new writers. Almost 40 cast recordings from The York Theatre Company productions are now available on CD, including its acclaimed revival of Closer Than Ever (2013 Off- Broadway Alliance Award for Best Revival); commercial transfers of such York premieres as The Musical of Musicals (The Musical!), Souvenir (Tony Award Nomination for actress Judy Kaye), and Jolson & Company, and revivals of Pacific Overtures and Sweeney Todd (four Tony Nominations including Best Revival) have all showcased the importance of The York and its programs. Recent New York premieres have included Marry Harry, A Taste of Things to Come, and Rothschild & Sons. The critically-acclaimed musical Yank!, which received its Off-Broadway debut at The York in 2010, recently opened to rave reviews in London as did York’s Rothschild & Sons. The hit musical Cagney received its York premiere in 2015 and subsequently transferred to the Westside Theatre for over 15 months. Desperate Measures, the hit new musical from 2017, received a total of 14 award nominations that included “Best Musical” from the Lucille Lortel, Outer Critics, Drama Desk and Off-Broadway Alliance and, subsequently, transferred across town to New World Stages. Unexpected Joy, which received its Off-Broadway premiere at the York, recently completed performances at London’s Southwark Playhouse. The acclaimed new musical Midnight at The Never Get received a collective total of 7 nominations from the Lucille Lortel, Drama Desk, Outer Critics and Off-Broadway Alliance Awards. The 2019 Fall Musicals in Mufti series celebrates the work of legendary composer/lyricist Cole Porter, with the 1929 musical Fifty Million Frenchmen, followed by the irreverent revue The Decline and Fall of the Entire World as Seen Through the Eyes of Cole Porter (1965), closing with Panama Hattie (1940). Recently launching the York’s 50th Anniversary year was the acclaimed revival of the hit musical Enter Laughing; the season continues in November with the premiere of Anything Can Happen in the Theater: The Songs of Maury Yeston. The York is the recipient of a Special Drama Desk Award for “Developing and Producing New Musicals” and more recently an Outer Critics Circle Award for “50 Years of Producing New and Classic Musicals.”