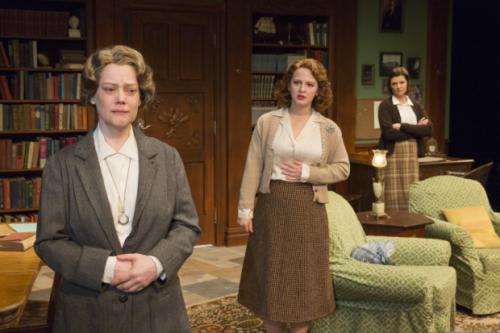 Hazel Ellis is an Irish playwright so little known she doesn’t even have a Wikipedia entry. Yet according to the Mint Theater Company program, The Dublin Opinion said she was the author of two “remarkably fine plays” marked by their “delicacy of treatment, subtle characterization, and sure dramatic instinct.”

Perhaps this is why the Mint has chosen to revive her second, 1938 play, Women Without Men, based on her own experiences at a Protestant private girls school. The problem is that Ellis did not write her play from the point of view of the students, but rather the teachers. Which leads one to believe the drama may be largely speculation.

Nevertheless, this production, directed by Jenn Thompson, features an excellent cast led by Emily Walton as Miss Jean Wade, the newest teacher to arrive at Malyn Park. The idealistic Wade is surrounded by unhappy women who dislike their job, disapprove of their students and regret their unmarried state.

Miss Marjorie Strong (Mary Bacon) greets Wade with the cynical advice that she shouldn’t expect too much pleasure at the school. Mademoiselle Vernier (Dee Pelletier), the French teacher, has not gotten over her lost dowry, which resulted in her lost chance at marriage. Miss Ruby Ridgeway (Kate Middleton) is jealous of Wade’s popularity with the students and fabricates stories of her success with men. She quarrels endlessly with her equally difficult roommate Miss Willoughby (Aedin Moloney).

But it is Miss Connor (Kellie Overbey) who is the most antagonistic towards Wade after the younger teacher dismisses her life’s work, “History of Beautiful Acts Throughout the Ages.” This turns the play briefly into a whodunit à la Agatha Christie (without the murder). And the shabby teachers’ sitting room goes a long way to reinforce the perception.

Women Without Men is filled with witty quips and insights that were probably quite perceptive at the time. The play might have been an effective early feminist play if these ladies were not so totally obnoxious and Ellis didn’t seem to be advising marriage as a cure for their unhappiness.

But given these spinster teachers’ constant bickering and pettiness, the best we can do is excuse their behavior as the consequence of women’s lack of opportunity in the first half of the twentieth century. Today, when women are doctors, lawyers and corporate executives, it all seems rather quaint. 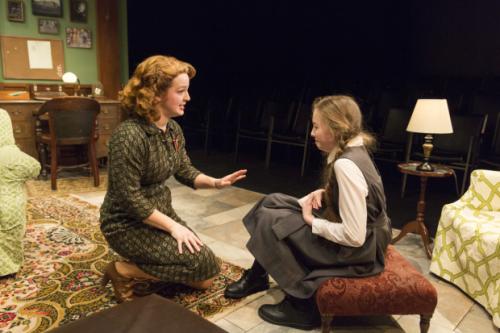 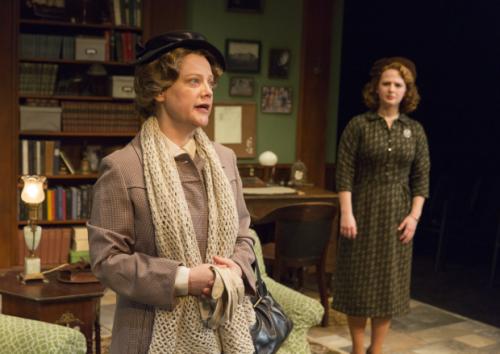