We Have to Hurry, new work by acclaimed playwright, actor, and director Dorothy Lyman starring Kathleen Chalfant and Elliott Gould will host a Virtual Stage Door, with the play, which streams live via Broadway on Demand for two performances only, Saturday, May 1 at 8pm and Sunday, May 2 at 3pm. 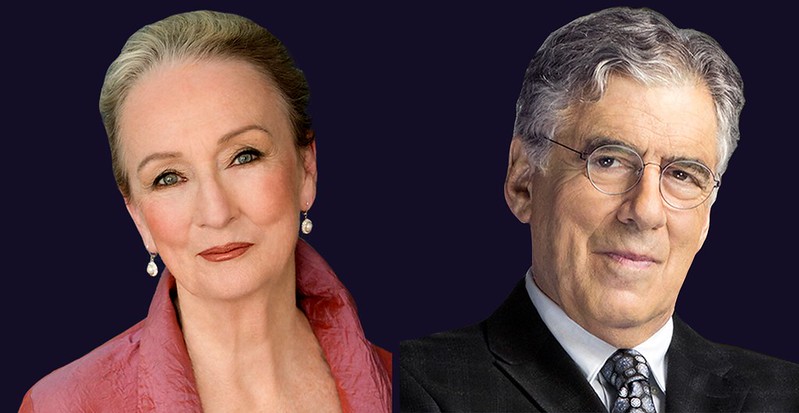 We Have to Hurry, new work by acclaimed playwright, actor, and director Dorothy Lyman starring Kathleen Chalfant and Elliott Gould will host a Virtual Stage Door, with the play, which streams live via Broadway on Demand for two performances only, Saturday, May 1 at 8pm and Sunday, May 2 at 3pm.

Two mature couples get a spark in life’s third act in We Have to Hurry directed by Patricia Vanstone. One of the most beloved theater rituals is waiting by the Stage Door to get your Playbill signed. Since we can’t do that now, Dorothy Lyman and the cast of We Have to Hurry are hosting a Virtual Stage Door. People that purchase VIP tickets ($25) will be able to submit questions to be answered during an invite-only live post show Q&A. General Tickets are ($15). In addition Producers Stuffed Olive, Inc. and Davina Belling will donate all profits from the streaming of We Have to Hurry to The Actors Fund Home East and West. Tickets, priced at $15 per household, are available to purchase HERE

At a retirement community in sunny Cedar Key, Florida, 70 year-olds Margaret and Gill are forced apart in their adjacent condos because of the mandatory isolation for all residents.  Across their neighboring balconies, Gil who is seriously in love with her observes Margaret’s frustrations and realizes he must use his wit and humor because every moment is precious.  We Have to Hurry, but can he persuade her to come downstairs and take a walk on the beach with him?

In keeping with the play’s touching message, all profits from the live stream of We Have to Hurry will be donated to The Actors Fund Home East and West. Owned and operated by The Actors Fund, the residences offer short-stay rehabilitation, assisted living, skilled nursing, and memory care services for individuals who have dedicated a major portion of their professional lives to the performing arts and entertainment.

Along with Kathleen Chalfant and Elliott Gould, co-star Jeanne Lauren Smith is featured in the cast. Sound design and technical support for the streaming event are by Josh Liebert.

Tickets for the live stream of We Have to Hurry are $15 per household for general viewing.  VIP tickets for the play and ‘Virtual Livestream’ are $25 per household.  They are both valid for one viewing only. The performance schedule is as follows: Saturday, May 1st  at 8pm and Sunday, May 2nd at 3pm  For more information and to purchase tickets, please visit https://www.broadwayondemand.com/channels/details/we-have-to-hurry

Kathleen Chalfant (Margaret) received a Tony Award for her performance in Angels in America and is the recipient of the 1996 OBIE Award for Sustained Excellence, 2004 Lortel Award for Sustained Excellence of Performance, 2015 Lifetime Achievement Award from the League of Professional Women, and the 2018 OBIE Award for Lifetime Achievement. Broadway: Racing Demon, Dance With Me. Off-Broadway: A Woman of the World, Wit (Drama Desk, Lortel, OCC, Drama League, CT Critics Circle, and OBIE Awards), For Peter Pan on Her 70th Birthday, A Walk in the Woods (Drama Desk nom.), Talking Heads (OBIE Award), Nine Armenians (Drama Desk nom.), Henry V (Callaway Award), Dead Man’s Cell Phone, and many more. Select Film & TV: Ulysses, Duplicity, Lackawanna Blues, Kinsey, The Laramie Project; recurring on “The Affair,” “The Strain,” “The Americans,” “House of Cards,” “Rescue Me,” “The Book of Daniel,” “The Guardian,” “Law & Order,” and “One Life to Live.” She has received the Drama League and Sidney Kingsley Awards for her body of work and holds an honorary doctorate in Humane Letters from Cooper Union.

Elliott Gould (Gil) is a prolific American actor and producer, who began his acting career on Broadway. His portrayal of Trapper John in Robert Altman‘s feature film M*A*S*H earned him a Golden Globe nomination and landed him on the cover of TIME magazine, calling him a “star for an uptight age. “Nominated for an Oscar for his performance in Bob & Carol & Ted & Alice, other memorable roles include playing Philip Marlowe in Altman’s The Long Goodbye and being the first American actor to work with renowned director Ingmar Bergman when he starred in The Touch. He has since appeared in noteworthy roles in numerous feature films including Contagion, American History X, Bugsy, Meet Ruby Sparks, A Bridge Too Far, Capricorn One, The Lady Vanishes, The Muppets Take Manhattan, The Last Flight of Noah’s Ark, and portrayed Reuben Tishkoff in the popular trilogy of Ocean’s Eleven, Ocean’s Twelve and Ocean’s Thirteen.  On television, a new generation became enthusiastic fans when Mr. Gould appeared as Jack Geller, Ross and Monica’s father, on the wildly popular sitcom Friends. His other TV work includes Ray Donovan, the sitcom Mulaney, Doubt, 9 JKL, Grace and Frankie, and The Kominsky Method.   He is part of an elite club having the distinction of having hosted Saturday Night Live six times. Gould produced several films including Woody Allen’s, Everything You’ve Always Wanted To Know About Sex But Were Afraid To Ask, Jules Feiffer’s Little Murders, and is in development on several new projects.

Dorothy Lyman (Playwright) is a two-time Emmy© Award-winning actress for her work as Opal Gardner on “All My Children” and is widely known for her co-starring role on “Mama’s Family,” alongside Vicki Lawrence and Carol Burnett. In addition to her numerous film and television appearances, Ms. Lyman also directed 75 episodes of the Fran Drescher sitcom “The Nanny.” Her other plays are Enemy (an adaptation of Ibsen’s An Enemy of the People), A Rage in Tenure and Soft Landing (directed by John Tillinger) all developed and produced by Players Workshop in San Miguel de Allende, Mexico. In The Bleak Midwinter, the prequel to We Have To Hurry was produced in New York City and Westchester in 2019. Ms. Lyman’s directing career began in 1980 when she produced and directed the original off-Broadway production of A Coupla White Chicks Sitting Around Talking starring Susan Sarandon and Eileen Brennan, and the subsequent national tour starring Elizabeth Ashley and Susan Anton. Her feature films, The Northern Kingdom and Split Ends, are available on Netflix.

Patricia Vanstone (Director) is an award-winning Canadian director, performer, and dramaturge. In addition to her over 150 acting and directing credits in Canada and abroad, she co-founded The Foster Festival in Niagara, Canada in 2016, where she produced four successful seasons and directed seven world premiere productions, including Halfway There, Screwball Comedy, and Lunenberg. Under her direction and dramaturgy, the Young People’s Theatre production of Beo’s Bedroom won a DORA Award for Outstanding TYA Production and was a finalist for a Chalmers Award for Outstanding New Play, TYA. She is the recipient of the “Established Artist Award” at the St. Catharines Arts Awards. Her Foster Festival production of Old Love, a StageDoor.com Top 10 production, was subsequently presented at Players Workshop in San Miguel de Allende, Mexico.