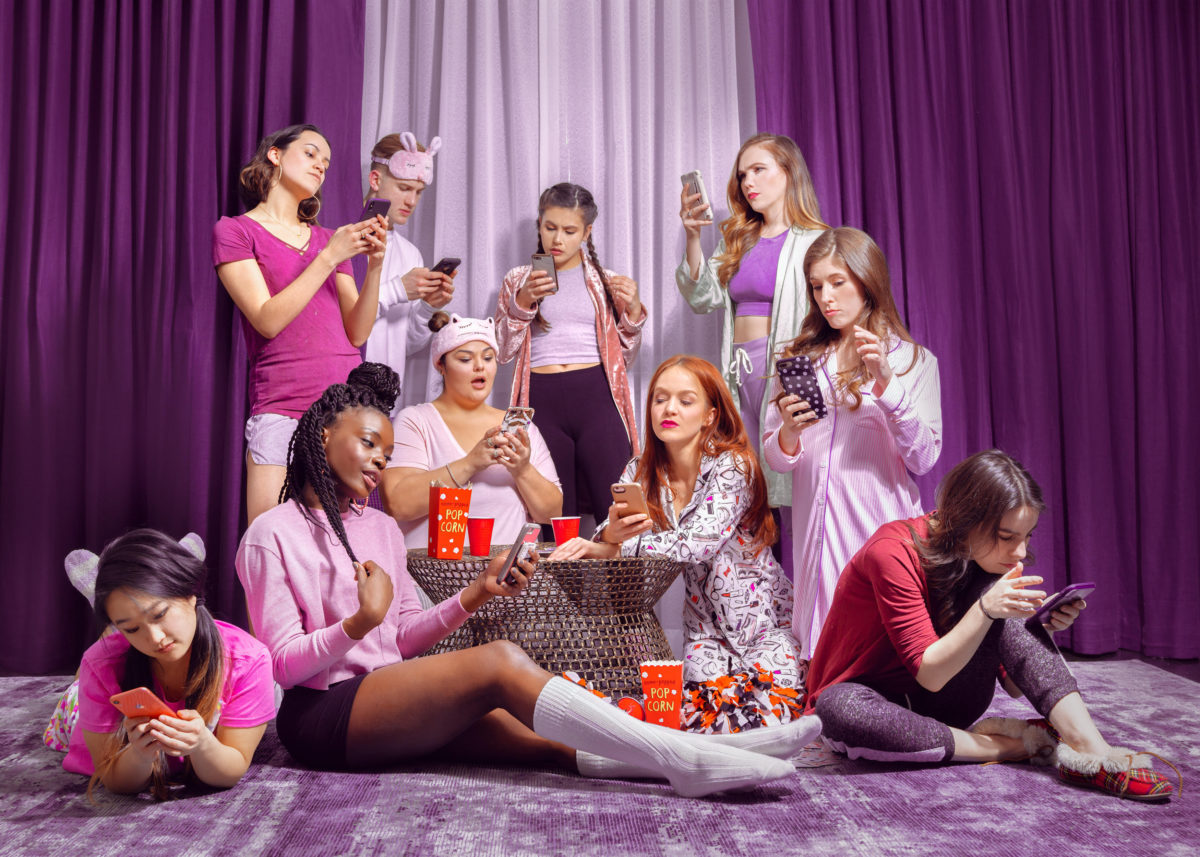 Her team’s performance in last year’s regionals was so embarrassing, when a member suffered a concussion, that a video of it has gone viral. Riley wants to overcome the shameful possibility of being remembered as “the worst team ever” by inspiring the team to compete again for a slot in the upcoming regionals.

All of this is familiar, of course, from a host of teen-based movies, TV programs, plays, and musicals (like Bring it On or Heathers). Also familiar is the conversion of the benign circumstances into a tale of bloody deeds when, during the night, two of the girls are stabbed to death, and Clark (Louis Griffin), the boyfriend of the pious but nonetheless ct Annleigh (Kaitlyn Frank, solid), meets his fate by accident, with one more death to come before the night is over.

Fearful of having to be the subjects of an ongoing investigation because of the first three misfortunes, the girls agree to frame Mattie (Cathy Ang, KPOP), their freshman teammate, who later sings “Mattie’s Lament,” a funny song about surviving in juvie. Eventually, with the basement door locked, the key missing, no cell service available, and a storm raging, things look dire for the remaining Tigers.

In what is likely the cleverest number, “IDK/The Breakdown,” heavily rhymed to a steady beat, the girls look at the facts and consider everyone’s motives until the real killer confesses, her motives so slender they practically don’t exist. (Anyone who’s seen or read enough murder mysteries knows the formula for figuring out who she will be.) A rousing cheerleading routine brings the show to its cheerful conclusion.

Darkly satirical, the show is spirited enough to appeal to teens or anyone involved in school team activities. Others, maybe not so much. It touches on issues of sex, popularity, competition, and appearance to which youngsters can relate; the presence of characters like the alcoholic Farrah (Zoe Jensen, making an impression) and the pill-popping Chess (Celeste Rose, also distinctive) expose the depression and anxiety plaguing so many of our younger generation, as reported today in the New York Times.

Campy as it may sound, the show’s distance from campiness is underlined by its difference from its much more tongue-in-cheek opening, which briefly depicts a scene from a teen horror flick being watched by several characters on a laptop. The comical Valley Girl-like speech patterns we hear suggest a far broader approach than that taken when the action soon shifts to the play’s actual characters, who sound far more ordinary.

Allen’s book of murderous misses has a certain clumsy, overstuffed charm up to when it gets derailed by how the girls, led by an African-American girl named Cairo (Wonu Ogunfowora, a big voice and a determined presence), respond to the killings. We’re not supposed to take any of this seriously, of course, but the relatively rational behavior of the girls up to now simply doesn’t support their eventual response, turning what was plausibly implausible into the distractingly implausible. It’s something from which the show never recovers during its way too-long two hours-plus running time.

While entertaining, though, and containing some witty lyrics, the mostly upbeat score—played by an offstage four-member orchestra of keyboard, guitar and ukulele, bass guitar, and drums—has a generic pop sound that sometimes can be monotonous, with tunes that bide their time in preparation for the big notes. The talented cast, energetically directed by Michael Bello, sings well under the musical supervision of Patrick Sulken, and moves with enthusiasm to the bouncy choreography of Katherine Roarty, with standout work from Mimi Scardulla as Reese, the unconventionally-sized girl who transitions from mascot to light-on-her-feet, split-performing cheerleader.

Ann Beyersdorfer has filled the intimate Theater 80’s stage with a set showing a living room-type arrangement at center, a bathroom (toilet and shower included) on a raised platform at one side, and a kitchen on the other. Jamie Roderick nicely shapes both the mystery drama and musical comedy lighting, Matt Franta and Brandon Pugmire handle smoothly its fair amount of “violence design” (a way of describing fight choreography I’ve not previously seen), Heather Carey provides spot-on costumes, and Josh Liebert’s sound design enhances the listening experience.

A scheduling glitch prevented my granddaughter (coach of a Long Island college cheerleading team) from seeing the show when, a week earlier, we arrived an hour after it began. She couldn’t accompany me when I returned but, despite my own strong reservations, my replacement plus-one—her mother—said she’d not only have had fun but would have suggested some cheerleading tips for the cast!