The new musical War Paint and the revival of Lillian Hellman’s The Little Foxes (1939) featuring alternating leading ladies represent more than just two spectacular rounds of dueling divas—though that would be reason enough for rejoicing. Both productions afford fascinating takes on the shifting role of powerful women and how they are portrayed in popular media. 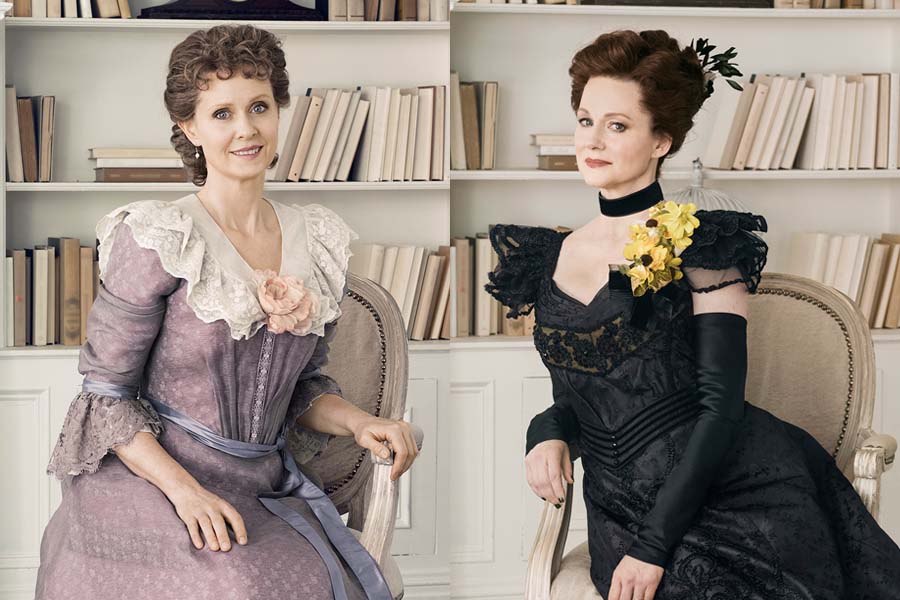 The new musical War Paint and the revival of Lillian Hellman’s The Little Foxes (1939) featuring alternating leading ladies represent more than just two spectacular rounds of dueling divas—though that would be reason enough for rejoicing. Both productions afford fascinating takes on the shifting role of powerful women and how they are portrayed in popular media. Hellman’s Southern melodrama is set in 1900 when women had to use charm, subtlety and sexuality to achieve prominence. War Paint profiles two pioneering titans of the cosmetics industry who shattered glass ceilings from the 1930s into the ’60s, but still met male resistance. Attitudes about female empowerment have significantly altered as well. Hellman’s avaricious Regina Giddens is a hissable villain, equally as rapacious as her cutthroat brothers in her quest for material wealth. She is countered by her teenage daughter Alexandra who slowly realizes her mother’s cravenness and vows to fight it at the final curtain. Helena Rubinstein and Elizabeth Arden, the heroines of War Paint, are portrayed as admirable and courageous, even if they are almost as implacable as Regina and just as unscrupulous in their business practices (though they do stop short of Giddens’ negligent homicide.) In addition, I found both productions tremendously satisfying.

War Paint has largely been greeted as an opportunity for theater fans to worship at the feet of its super-size stars Patti LuPone and Christine Ebersole who each give their usual spectacular performances, while the show itself has been criticized as uneven and lacking in spark. We don’t know who to root for, whine its detractors, both women are portrayed as ruthless and remote, it may as well be a PBS documentary. Yes, Doug Wright’s book is inspired by Ann Carol Grossman and Arnie Reisman’s TV doc The Powder and the Glory and Lindy Woodhead’s book War Paint and it doesn’t take the traditional Broadway musical route of asking the audience to identify with its protagonists. Instead, Wright, composer Scott Frankel and lyricist Michael Korie present their characters warts and all, just as they did in the equally unconventional Grey Gardens.

Wright offers a fascinating history of 20th century fashion and make-up as well as an insightful character study, directed with speed and style by Michael Greif. The incomparable decades-spanned designs are by Catherine Zuber (costumes), Angelina Avallone (make-up), and David Brian Brown (wigs). The score is sharp, funny, and intricate, employing the musical vocabulary of its various eras to convey rapid changes and emotional depths.

Rubinstein, a Polish Jew, and Arden, a farmgirl from Ontario, remade themselves into queens of beauty and business, and were at each others’ throats for 50 years. They never actually met so opportunities for clashes are limited. But, just as Schiller invented an encounter between Elizabeth I and Mary, Queen of Scots for Mary Stuart, Wright fabricates a green-room tete a tete for his ladies near the final curtain. LuPone and Ebersole milk this climactic scene for all its worth, each dripping with contempt and then gradually admitting grudging admiration for the other.

Before this they command the stage separately but equally. LuPone’s Rubinstein is a defiant force of nature, a bejeweled battleship. The Slavic accent is a bit thick at times, making Korie’s lyrics somewhat blurry, but the star’s magnetic charisma, unique vocals, and impeccable timing cut through the fuzziness to establish a figure as strong and memorable as Evita or Mama Rose. She’s not afraid to show Rubinstein’s unattractive drive for immortality in off-beat numbers like “Forever Beautiful.” Ebersole’s machine-gun delivery and empathic acting capture both Arden’s elegant facade and her tough-as-nails interior. In ballads such as “Pink,” reminiscent of several of her numbers in Grey Gardens, she delineates the executive’s regrets and anger as Arden is forced to sign away her company and her worth is reduced to her signature color. John Dossett and Douglas Sills offer sturdy support as their right-hand men, but the show belongs to its two divas.

Laura Linney and Cynthia Nixon forge a similar partnership in Manhattan Theater Club’s revival of The Little Foxes, alternating between the lead role of the domineering Regina and the supporting one of her pathetic alcoholic sister-in-law Birdie. (I saw Linney as Regina and Nixon as Birdie.) Director Daniel Sullivan provides a rip-roaring production dripping with melodrama and histrionics, but never going over the top into camp territory. Linney’s Regina is a monster of deceit and narcissism, stunning in her beauty (Jane Greenwood’s gowns and Tom Watson’s hair design are particularly flattering) and seductive in her use of feminine wiles. Watch as the smile fades from her face and her eyes narrow into slits when she is thwarted and must switch from honey to venom to achieve her ends. This is no victim of sexism as Stockard Channing played her in a feminist interpretation for the 1997 Lincoln Center revival.

Similarly, Nixon asks for little sympathy as Birdie, the dipsomaniac aunt shoved into a corner. She doesn’t overplay this desperate woman’s loneliness, but conveys the intense lengths she goes to to mask it and her brief moments of self-awareness and honesty made possible by drink.

Richard Thomas as Horace, Regina’s ailing, conscience-stricken spouse, provides a fiery curtain speech as he denounces his wife while Michael McKean and Darren Goldstein are suitably wily as the grasping Hubbard brothers. The audience utters an audible gasp when Ben states the Hubbards and their kind “will take over this country some day.” Hellman’s warning of corporate greed trumping—pun intended—the common good is coming true and she accurately saw that women will be on both sides of the fight.