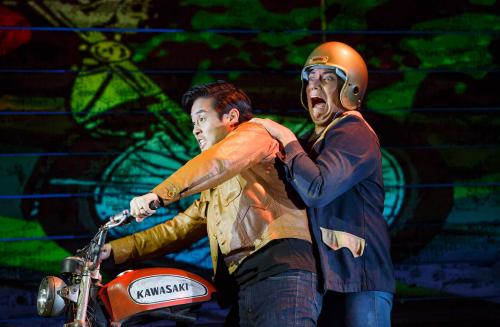 In fact, the story Nguyen tells is mostly of the boy-meets-girl variety, only it’s
set in an Arkansas refugee camp where Tong (Jennifer Ikeda) who arrives at the
camp, with her mother (Samantha Quan), meets Quang (Raymond Lee) a helicopter
pilot who escaped with a friend as Saigon fell. Tong is looking for sex and
companionship, but not love. This is perfect for Quang, who is intent on
staying in Arkansas only as long as it takes him to figure out how he can get
back to Vietnam and find the wife and children he had to leave behind.

The play has a score of 70s music that will win over any baby boomer’s heart but
seems at odds with the rap ballads the characters occasionally burst into. The
production also makes excellent use of video, especially when depicting the
horrors of the Vietnam War. And most of the actors do a terrific job in their
multiple roles.

But what really makes this play different is that Nguyen, co-founder of the
Obie-winning Vampire Cowboys Theatre Company, and director May Adrales tell the
story in a thoroughly modern way, lavishly employing the hallmarks of pop
culture: rap, cartoon characters and dialogue, and inner-city slang. There is
no real reason for this choice, it seems, other than drawing millennials into
the theater and making the old folks feel hip.

But this choice has a profound effect on the play. The actors rattle off their
lines more for comic effect than character development. Their backstory is
minimal: Quang has his family; Tong was engaged to a man she doesn’t
particularly love, and she has a brother who refused to leave.

Then, towards the end of Act II, Quan’s friend convinces him he’d only get himself
killed going back to Vietnam, and Quan decides to get back with Tong. Although
she is about to get engaged to the bumbling soldier, she now decides Quan is
the man she really loves. Even Tong’s mother becomes the loving, compassionate
parent she has shown no sign of being previously.

We assume they live happily ever after. But abruptly Quan morphs into his older
self. His American son has become a writer and wants to know all about his
experiences in Vietnam.

Quan’s son, and the audience, are now surprised to learn that Quan does not concur
with the current view maintaining the war was a mistake and a disgrace for the
United States. He considers himself a South Vietnamese who was fighting off the
aggressors, and the Americans the temporary saviors who offered the Vietnamese
their only hope against the vietcong.

Vietgone, in fact, may be a perfect example of millennial narcism.
Nguyen had a story to tell. As he points out at the very beginning, it is his
parents story. Why he chose to appropriate that story by telling it in terms
that have little to do with the characters he presents is anyone’s guess. 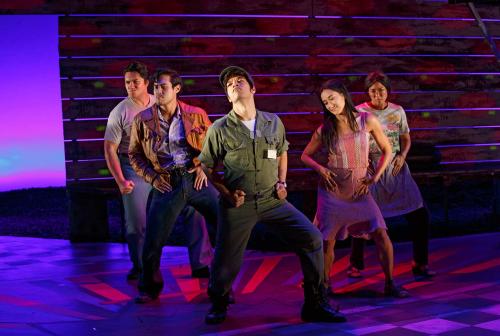 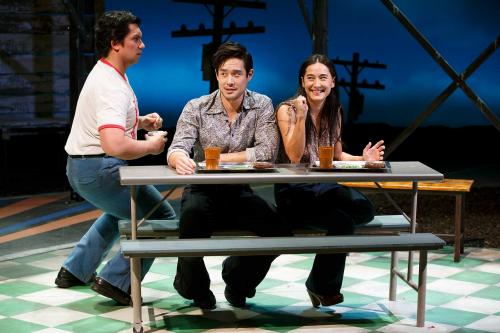