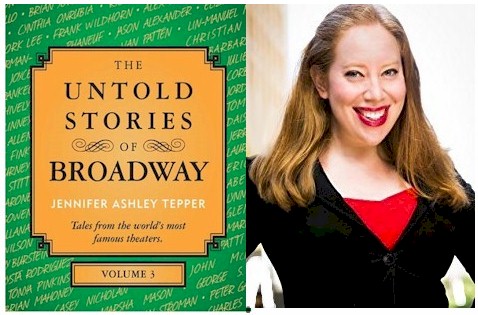 The long-awaited Untold Stories of Broadway, Volume 3: Tales from the World’s Most Famous Theaters by producer and cabaret programmer Jennifer Ashley Tepper (Dress  Circle Publishing; 332 pages; 8 ½ x 11 Trade paper; SRP $20) lands in book outlets. Co–creator of the Bistro Award-winning series, If It Only Even Runs a Minute [now in its sixth year], Tepper did her homework. She interviewed over 250 actors, directors, producers, writers, composers, producers, stagehands, designers, dressers, and just about everyone who helps bring shows  to life eight times weekly.

Tepper’s enthusiasm for the job not only jumps off the page but also elicits
funny and compelling front of house, backstage, and onstage experiences. You’ve
heard the expression “If these walls could talk!” The walls of some legendary
Broadway houses do [revealing secret passageways, even ghostly encounters] –
even the spirits of from those, sadly, long gone raise their voices.

The book, as did Volume 1 and 2, celebrates just about everything about Broadway – and from Tepper’s unique perspective as an insider. She engages you with wonderful bites from interviews from those who were “there in the light.” It covers untold numbers of careers with delightful anecdotes.

Under chapters named for the Belasco, Broadhurst, Kerr, Lyric, Majestic, Schoenfeld,  St. James, and other theatres where the stars shone, Tepper let’s you in on what it’s like to “hang” with Stephen Sondheim with one of his shows in progress; reveals Patti LuPone’s ghostly theater encounter in riveting detail; and what it’s like to be on stage in front of over a thousand theatergoers with multi-colored lights blazing down at you.

This volume, as was the case with 1 and 2, would benefit with photos – even if only thumbnails or composites, window cards. But there’re more than enough funny and revealing stories to keep you turning pages. As Tepper proves, there’s rarely anything boring about theater.