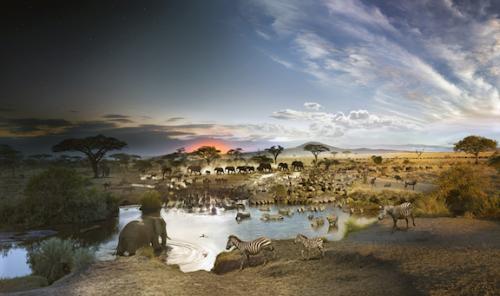 WATER:  What Better way to welcome the summer than to pay homage to the element That surrounds us. These particular artists have a passion for how they perceive Water and each image is very evocative and their work stands alone.

WATER, weather it be the ocean, lake or pond, is full of symbolism and metaphor. Out here on the East End were surrounded by it, so it’s impossible not to feel draw no matter where ever we turn.  We all love being at sea level………

The work in this show is very inspirational. Some are slightly calmer while others are very dramatic. Either way, they’re all quite exciting. They make you feel closer to Nature.

Stephen Wilkes’s wildly popular “Day to Night” Series are exciting images of the most beloved cities and sites of the world. As part of his on going series he wanted to capture the iconic Santa Monica Pier in Los Angeles which he felt captures the essence of Southern California. Wilkes photographs from a stationary 50 foot crane. All explained on a “CBS Sunday Morning” segment Shooting 12 hours from day to night and gathering 1,200 to 1,500 image into form one image from dawn to dusk. He was recently featured in newest National Geographic Issue celebrating the 100th anniversary of the State Parks in America. He is on a quest to complete his vision photographing for an upcoming a fine art publication. Please see Stephen recent lecture on Ted Talks.

Daniel Jones his newest body of work, the Seaside Expressions series is almost painterly and it creates a visual moment that pulls the viewer in. His work taken with a digital camera the motion one sees is done entirely in the camera. The stunning color is all true to nature, altered only by the atmosphere created by the weather, light and in camera movement. This body of work, a new beginning, for Dan has been widely admired by our collectors and fans in the gallery. Dan Jones, who was featured on “CBS Sunday Morning” a few weeks ago, with an opening reception for his work on Saturday, December 26, from 5 to 7 p.m. His dreamy “Seaside Impression” series and large format camera-shot la landscapes

Herbert Friedman began photographing in 1969 while a graduate student in Psychology at Temple University. He was a practicing Psychologist for many years, and additionally studied photography with Michael A. Smith, and was schooled in classic black and white photography. The integration of Psychology and Photography provides Herb with a powerful creative point of view, and his passion for people, living, a wonderful sense of humor, and joy are all brought together to bring the viewer pleasure. He is very drawn to Water as a subject for his photography. He has received many awards and accolades.

Blair Seagram. “When my lens turned toward surfers I was inspired by their keen sense of timing catching a wave then riding across it. The sequence of images that make up the surfing panoramas is less about a decisive moment than about a series of moments or continuity of actions that are presented as one still image.” -Blair Seagram