Based on the book and Smithsonian Associates lecture by author Stephen Galloway.
March 29, 2022: Larry Olivier- not yet Laurence or Sir Laurence, “the finest actor of our age” first saw Vivien Leigh- successively Vivien, Viv, and Vivling, in 1936’s ironically titled The Mask of Virtue. (A stage adaptation of Diderot) Seven years before, at 21, the virginal country Pastor’s son married better known actress Jill Esmond. “There was nothing of the passionate personality about her,” a friend said. She may have been gay. 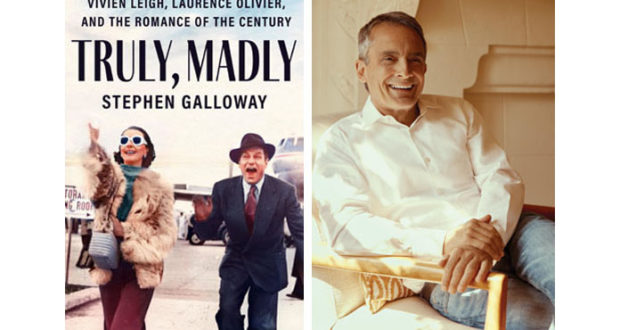 Based on the book and Smithsonian Associates lecture by author Stephen Galloway.
March 29, 2022: Larry Olivier- not yet Laurence or Sir Laurence, “the finest actor of our age” first saw Vivien Leigh- successively Vivien, Viv, and Vivling, in 1936’s ironically titled The Mask of Virtue. (A stage adaptation of Diderot) Seven years before, at 21, the virginal country Pastor’s son married better known actress Jill Esmond. “There was nothing of the passionate personality about her,” a friend said. She may have been gay.

Vivien Leigh (ne Vivian Hartley), who’d admired Olivier in Theater Royale, had, at 19, wed barrister Herbert Leigh Holman from whom she took her stage name. Brought up in India, then left in a British convent school, she was attending RADA (Royal Academy of Dramatic Art) when she saw a man who cut a romantic figure on horseback. (Curiously he resembled swain-to-be in Gone With the Wind, Ashley Wilkes) Holman turned out to be stolid, disliked theater, and initially made her quit school.

The star-crossed lovers had unhappy marriages, each with a child. A garden party thrown by Jill and Larry brought the couples together (Jill always liked Vivien). During the filming for Fire Over England, attraction became incendiary. Two years of heated, clandestine assignation followed. So thoroughly were Vivien and Larry struck, her called their passion “a virus.” Vivien rationalized. “To do it once is forgivable, but never again;” Larry was riddled with guilt. The actor’s much later memoir begins, “Forgive me, Father, for I have sinned.”

Larry mounted a production of Hamlet in Elsinore, Denmark to be performed outdoors. “With all its virility and acrobatic flash, it was his way of wooing her.” (Kenneth Tynan) A first sign of instability appeared when Vivien exploded one day, beating her lover. Larry let it pass at the time, but inquired of her parents whether there was history of mental illness. The play was rained out. Cloistered, the couple plotted escape. Midnight 1937, Vivien and Larry snuck out of their respective homes and set up together. Her career was slowly rising, his not so much.

Across the pond, Larry made three Hollywood flops in a row.  He wrote Leigh extravagantly and often. Reticent to go back after again appearing on the stage, he was then talked into Wuthering Heights. The actor never got along with Merle Oberon in part, because he’d wanted Vivien cast. He fought “philistine” director William Wyler every step, though later admitted his acting had improved. “Act with Merle and think of Vivien!” Wyler commanded. And so, without faith in the film, he did. Rebeccacame next. Again, Larry failed to get Vivien cast.

“I woke up absolutely raging for desire for you my love…Oh dear God how I did want you…” Larry wrote Vivien. “If we loved each other only with our bodies, I suppose it would be alright. I love you with everything somehow, with a special kind of soul.” (Vivien)

In England, the actress made the tender Waterloo Bridge and A Yank at Oxford. She then resolved to play Scarlett O’Hara. Vivien was hardly alone, of course. Every actress in Hollywood and quite a few in New York campaigned and auditioned for the plum role in Margaret Mitchell’s Gone With the Wind. (TCM occasionally shows audition tapes. Watch for them.) According to Galloway, Vivien was introduced to producer David Selznick on the set while Atlanta burned!

The incipient star loathed her Rhett Butler, Clark Gable. Three successive directors tried their hands at the film. The third, Victor Fleming was a machoman buddy of her costar. Vivien felt ganged-up on. Both she and Olivia de Havilland (Melanie Hamilton) secretly visited first director George Cukor for private coaching.

Scheduling was brutal. Vivien would cycle from deep depression to partying all night. The term “bi-polar” and its treatment were unknown. That she was never helped to overcome her illness runs through the veins of the book like blood. Both onstage in London and with his fraying lover in California, Larry was drained. A Best actress award for the film, made him jealous. The success of Pride and Prejudice ameliorated some of that sting; Romeo and Juliet did not.

In 1940, the couple finally married in a modest ceremony at Ronald Coleman’s farm. Garson Kanin and Katharine Hepburn were witnesses. Larry’s ring was inscribed: “faithfulness is my guide”, which Galloway notes was “a less than subtle hint.” Vivien’s was inscribed “the last one you’ll get, I hope.” When the war started, the couple was advised to stay here, but not returning didn’t sit well with the British.

An article in Photoplay Magazine entitled A Love Worth Fighting For (by Ruth Waterbury) was the single welcome example of  sympathetic press. Not everyone agreed. Critic Kenneth Tynan said Olivier sacrificed his talent to further his wife’s career. Noel Coward wrote the actor should have just given her “a clip in the chops.”

Alexander Korda then offered the Oliviers That Hamilton Woman, the last of their films together. It centered on the passionate affair of Emma, Mrs. Sir William Hamilton (the British Envoy to Naples) and naval hero Horatio Nelson. Korda called it “a call to duty.” The film was a success. They sailed home and gradually resumed the status of golden couple.

Larry enlisted becoming “a pilot of notorious incompetence” (Michael Korda) and the couple moved into a quiet cottage. 87 year-old Bernard Shaw, having serially turned down adaptations of his Caesar and Cleopatra was no less susceptible to Vivien than Selznick had been. The resulting film featured Stewart Granger and Claude Rains. Larry was skeptical. His wife was 30 trying to play 16.

During production, Vivien had a miscarriage which exacerbated hysterical behavior. The poet Robert Lowell noted of his own extreme episodes, “The light at the end of the tunnel is just the light of an oncoming train.” To have declared his wife “mad” would have meant taking her to a psychiatrist or worse, locking her up. With this in mind, Larry hid his fears and threw himself into Henry V, then Richard III. His sister Sybille had had a breakdown. He convinced himself Vivien’s turmoil would pass. The couple bought the “baronial” Notley Abbey. Vivien began to cough, signs of the tuberculosis that would take her life.

In 1949, Larry directed his wife in Tennessee Williams’ play A Streetcar Named Desire catching the attention of Hollywood. The subsequent film starred Vivien with Kim Hunter and Marlon Brando. Brando wrote that he found Vivien disconnected from reality (undoubtedly enhancing the portrayal.) According to Galloway, her state also “ratcheted up her libido.” She began to walk naked in the garden and fall into bed with strangers. ‘Not that Larry hadn’t had liaisons. Vivien won her second Best Actress Oscar.

Things came to a head when the actress traveled to Sri Lanka (Ceylon) to make Elephant Walk with Peter Finch, “the only man who threatened her love for Olivier…She went insane, had to be held down and subdued.” (Galloway) The production shut down. Elizabeth Taylor stepped in. Vivien was flown to a mental hospital in England and given electroshock. There was no sympathy for mental illness. She was finally diagnosed properly, but treatment didn’t exist. Lithium wasn’t yet on the market. Galloway looks and sounds stricken, on the verge of tears as he speaks of this during the lecture.

The marriage crumbled.  “Olivier had to make a choice, his work or his wife.” (Galloway) 23 years after they ran off together, the couple agreed to divorce. Larry married actress Joan Plowright. Vivien partnered with Jack Merivale.

“My darling, whatever may happen, let us be friends, my dearest one…I shall love you all my life with tenderness and respect that is all embracing,” Vivien wrote Larry. “Darling, you did nobly, bravely, and beautifully and I’m very. Oh so very sorry that it must’ve been such hell for you…” Larry wrote back.

The book doesn’t end here, but its title ceases to pervade. Galloway goes on to describe Vivien and Larry’s professional and personal lives. Neither ever fully moved on. Shortly before his death from Cancer at 82, Larry was found watching one of Vivien’s films in tears. Despite her new relationship, Vivien kept a photograph of Larry on her bedside table until she died at 53 from tuberculosis.

Well written and copiously researched, Truly Madly often relies on observers making parts of it feel like a compilation. These sections could bear editing as could extensively detailed descriptions of the couple’s work lives. Anecdotes are entertaining and telling, but more about personal interaction would’ve reflected the title better.

Galloway is a former executive editor of The Hollywood Reporter and now the dean of the Chapman University film school.