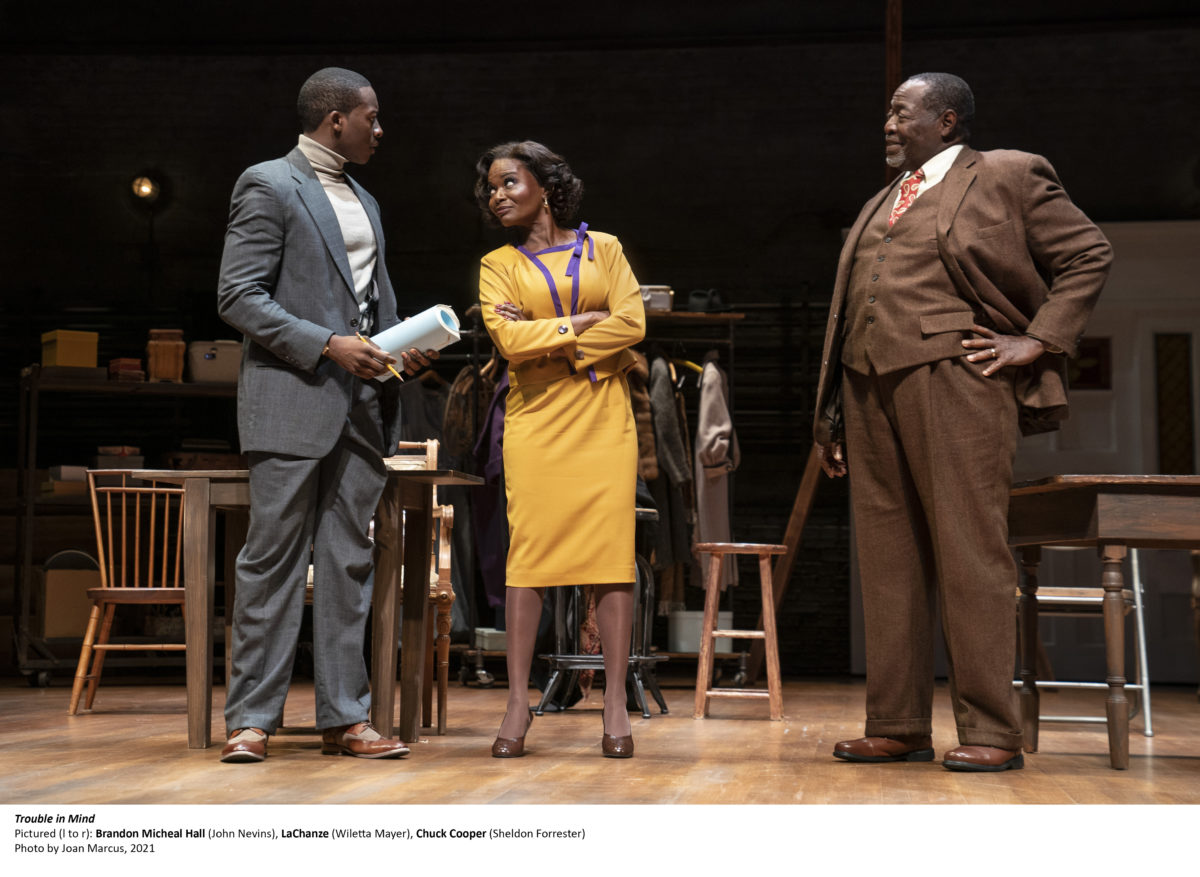 Whether because of this simple review or for other reasons, the show was being considered for a move to Broadway when it was cancelled, allegedly because the white producers wanted the playwright to tone down its racial anger, which Ms. Childress refused to do. Now, after six and a half decades, the play is finally receiving its Broadway debut in a Roundabout Theatre production featuring a glowing performance by LaChanze in the role of Wiletta Mayer, originated by Clarice Taylor.

Wiletta, a veteran actress, will be making her Broadway bow in the play’s play-within-a play, titled “Chaos in Belleville,” a white playwright’s melodrama set among “tenant farmers” (a.k.a. sharecroppers, as someone notes) down South. In it, a young African American man, seeking to exercise his voting rights, is lynched. The actors who assemble for the first rehearsal are John Nevins (Brandon Micheal Hall, effective), who plays the juvenile, Wiletta’s son; Millie Davis (Jessica Francis Dukes, smart and sassy), a flashily dressed, middle-aged actress cast as yet another shuffling servant; Sheldon Forrester (Chuck Cooper, as usual, superb), a veteran who, like Wiletta, has acted in movies made by the show’s director, and struggles—despite being called an “Uncle Tom”—to keep the peace when racial issues intervene; Judy Sears (Danielle Campbell, sweetly innocuous), the pretty, white ingénue who studied in the “Yale drama course,” taking on her first professional role; and another white actor, the middle-aged soap opera regular Bill O’Wray (Don Stephenson, nicely confused), playing Judy’s father, a local landowner running for office.

The pompously self-involved young director, Al Manners (Michael Zegen, “The Marvelous Mrs. Maisel”), is in a custody fight with his wife (dropped, like a number of other potential plot lines, once introduced). You can see why when you watch his interactions not only with the cast but with his put-upon stage manager, Eddie Fenton (Alex Mickiewicz, appropriately frazzled) and the 78-year-old doorman, Henry (Simon Jones, fine), whose stories of the battles over Ireland’s Home Rule serve as a corollary to the struggles of Black Americans.

Trouble in Mind is a curious curio. It’s a rather uneven play, the dialogue can sometimes be clumsy or clichéd, and Charles Randolph-Wright’s sometimes overwrought direction is not a sine qua non of the art. Nevertheless, it holds a compelling socio-political-historical place as a prescient work reminding us of how many of today’s hot-button issues were just as disturbing then as they are now.

Childress sends poisoned darts at the theatre’s stereotyping of Black characters; the lack of plays about Black people (unlike the present season, it should be noted); the need for people to think about the words they use (albeit without reference to the yet unborn “political correctness); the existence of white privilege, although those words, too, weren’t on people’s tongues; and even sexual predation by men in power, hinted at in a bit between Al and Judy.

There’s also a good deal of satire aimed at Method acting (unnamed), then the major focus of actor talk, when Manners is unwilling to accept even the most honest performance, based on instinctive talent, unless it’s been intellectually justified or motivated. These scenes go too far, at times, and then are completely belied by those in which the actors rehearse their script. Here, Manners has them go to such ridiculous lengths to overact—like an SNL sketch or Spike Lee parody—that the contradiction between his theories and what he’s willing to accept make it impossible to believe in anything we’re seeing.

Much of the blame for this, it would seem, belongs to the actual director, Mr. Randolph-Wright, whose goals seems more to get laughs than anything else. O’Wray’s big political speech, timed to a recording of audience reaction, is also rehearsed more for farce than reality, even a somewhat heightened reality.

Larger-than-life theatricality in the interest of making a socio-political point works only when the fiery Wiletta offers a tour-de-force performance of the demeaning behavior and accents Black actresses, largely relegated to mammies and maids, had to provide if they wanted to work. The exaggerated behavior of the rehearsal scenes not only makes no sense in terms of what any professional director would accept (especially a movie director), it doesn’t jibe with what these actors, especially Wiletta, would approve; one can’t help wondering about what’s going on the minds of the real actors doing this stuff.

This relates to another hard-to-buy feature, one used to create much of the show’s needed tension. It happens when Wiletta refuses to say the words the play-within-the-play’s writer provides for her in reaction to the danger her character’s son is facing. On the one hand, there’s the question of a little-known, highly ambitious, actress holding up a production because she disagrees with what her character must say (the playwright isn’t around), when she could so easily be fired for a clear infraction of Broadway protocol. (“Artistic differences,” the newspapers would report.)  On the other, it’s simply not credible that she would object to the writing of her role and say not a word when asked to do the ridiculous things Manners requires of her.

Throughout, we’re constantly reminded of these contradictions among the relative levels of reality made even more obvious when a character demands attention. For instance, Mr. Randolph-Wright stages several scenes by having someone standing downstage center, talking to the cast upstage, and forced to twist awkwardly to address them when necessary. And in the biggest example of such a scene, Mr. Cooper’s Sheldon, sitting at center, delivers a moving speech about a lynching he witnessed as a child; he steps forward, the lights go down so he’s in a spotlight with the others upstage of him, and then, just like that, he steps upstage and the lights come on again. It would have been even more effective if he had just sat there and said the words without all the smoke and mirrors.

The lighting is the work of Kathy Perkins, some of whose touches, when they don’t interfere so obviously with the onstage reality, are lovely, as when she shifts the colors on an isolated prop door. Arnulfo Maldonado’s set replicates the look of a bare stage with the usual odd tables and chairs, although, as laid out, it doesn’t invite the most interesting arrangements of the ensemble. Emilio Sosa’s costumes look sufficiently mid-1950s to pass muster, including the spectacular fur coat worn by Millie.

Most of the performances similarly pass muster, none more so than that of LaChanze, who wrings the part for every ounce of comedy and drama in it, and also gets to show off her Broadway-level singing chops on a spiritual. Least effective is Mr. Zegen, the ostensible villain, who only now and then seems authentic—as in his big speech about how hard it is to be white; most of the time he’s an unappealing caricature of a martinet director.

The two main reasons to see Trouble in Mind: its path-breaking revelation of still-burning issues rarely addressed so frankly onstage when it was written; its outstanding performance by LaChanze.