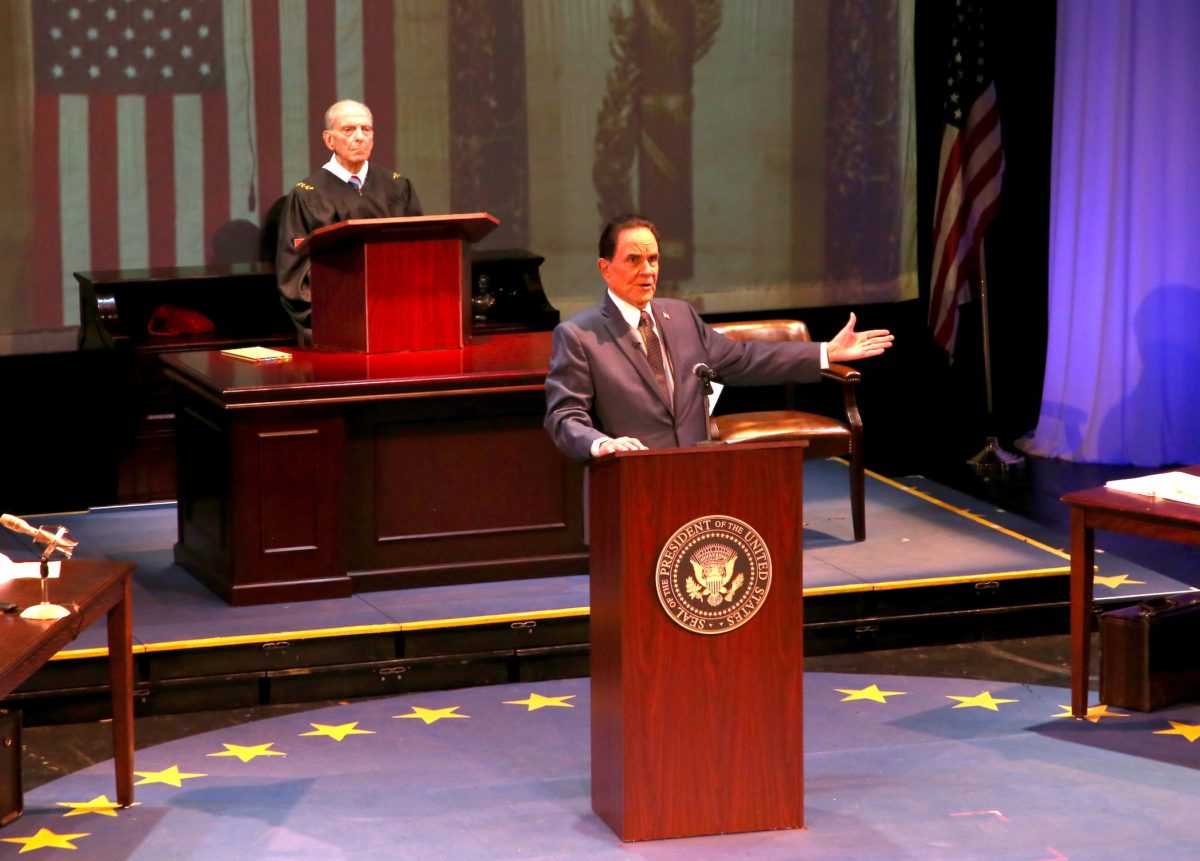 But what if it didn’t happen that way?

That is the premise of Trial on the Potomac: The Impeachment of Richard Nixon, a new play by George Bugatti based on Geoff Shepard’s book, “The Real Watergate Scandal,” and starring famous impressionist Rich Little as “Tricky Dicky.”

What if Nixon wasn’t all that tricky, however, but was set up by John Dean (Matthew Hammond) and others who had the press in their pockets and orchestrated the scandalous events to cover up their misdoings and put Sen. Ted Kennedy (Richard Wingert) in power?

So in this alternate explanation of history, instead of delivering the famous announcement of his resignation from office, Nixon shocks CBS reporter Diane Sawyer (Kelsey Lea Jones) and the nation by saying he isn’t going anywhere and that he will fight the charges.

Nixon’s defense is headed by James St. Clair (a savvy Troy Sill) and overzealous newbie Geoff Shepard (Nick Mauldin) who, aided by a deepthroat-like source, follow a trail of memos and secretly taped conversations that throw the burden of suspicion of wrong doing and coverup on Dean, Watergate burglar John Liddy (John Ramain), former Chief of Staff H.R. Haldeman (Lou Vitulli) and Watergate trial Judge John Sirica (Victor Colicchio) among others. To add credibility to the play,  the real Geoff Shepard, who worked as a lawyer in the Nixon White House, serves as technical consultant. His books are available for purchase in the lobby and the day I attended, he was available to sign.

Director Josh Iacovelli, who also designs the set,  creates the feeling that the audience (nicely socially distanced and wearing masks) are the Senator jurors attending the trial and skillfully takes us through time jumps in presentation. We travel with ease from attending the trial itself to conversation flashbacks to freeze frames, where some characters stop the action to express thoughts directly to the audience. Some movements of the actors seem halted and unnatural in other places, however.

A circle of presidential stars decorates the stage and video projections (designed by Bugatti/Mynerdywebguy) provide backdrop and setting information. Graphics are by Irvin Productions; Sound Design is by INS & OUTS , Ray Schilke. At the end of the performance, the audience is given ballots and asked to decide whether Nixon was guilty or not. The votes are tabulated and posted on the show’s website. As of this writing, no audience has cast the 67 votes it would have taken to convict Nixon and remove him from office.

The play, originally scheduled for May of 2020 was postponed due to Covid. It could use a few cuts The “who’s who”  which includes 14 men might be a little difficult to follow for those who don’t remember the cast of characters when television was preempted for the lengthy Watergate hearings and the ensuing news coverage which made Dean, Liddy, Haldeman, etc. household names. Some minor roles could be eliminated and some of the action condensed. Some of the dialogue concerning manufactured news and stolen elections sounds as though it could have been taken from recent news, however, giving us an uneasy feeling that some things never change….. The play clocks in at 90 minutes with no intermission.

Trial on the Potomac marks Little’s New York Stage debut.  Little, the man of more than 200 voices, has been doing impressions of Hollywood stars and other celebrities for decades. He has a voice for every administration, including Presidents John F. Kennedy, Lyndon Johnson, Gerald Ford, Jimmy Carter, Ronald Reagan, Bill Clinton, both George Bushes and Donald Trump. In January 2010, the Canadian native became a United States citizen and during his swearing-in ceremony, the Judge asked Little to recite the “Pledge of Allegiance” as John Wayne and he did.

Confession: I was a bit disappointed that Nixon doesn’t have more stage time as Little was a draw and I would have liked to see more of him. Here’s an idea for Little’s next New York stage show: a one-man play incorporating many of the voices and characterizations he does to such perfection. I’m there!

More information:Bugatti has authored numerous musical reviews (The Wonderful Wizard of Song: The Music of Harold Arlen). Trial on the Potomac is his first play.