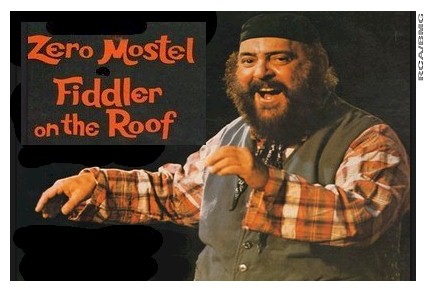 L’Chaim! To life! And what a life Fiddler on the Roof  has had. Since its 1964 Broadway debut, more than a half-century of sunrises and sunsets have set on the musical by Jerry Bock [music] and Sheldon Harnick [lyrics], with book by Joseph Stein, basedon Czarist Russia stories by Sholom Aleichem. It’s become one the most beloved musicals of all time, with its timeless score winning the hearts of millions the world over.

Fiddler is as sure-fire a draw today as back then. It’s a favorite of regional theatres – even high schools. Every Broadway revival has been a blockbuster. There’ve been six — including the current acclaimed production by Tony and Drama Desk Awards winner Bartlett Sher [The King and I, South Pacific] starring Danny Burnstein and Jessica Hecht; four West End productions and U.K. tours; in addition to thousands of multi-language stagings.

Ms. Isenberg takes readers beyond the stage with interviews with the stars of the original production [which played 3, 242 performances from 1964-1972] and the film adaptation starring Israel’s Topol; as well as celebrated producer/director Hal Prince, Harnick, the late Stein, and such Fiddler stage stars as Topol, Alfred Molina, Randy Graff, and, get this, Leonard Nimoy.

There are memorable tales of original star Zero Mostel, beloved by audiences and loathed by many contemporaries for his stage antics [ad-libbing, scene-stealing]. However, he was held in high esteem for his stinging 1950s testimony before the House Committee on Un-American Activities  and rebukes of “Commie hunter” Senator Joseph McCarthy. Mostel was one of the rare ones who emerged from the stigma of being blacklisted. 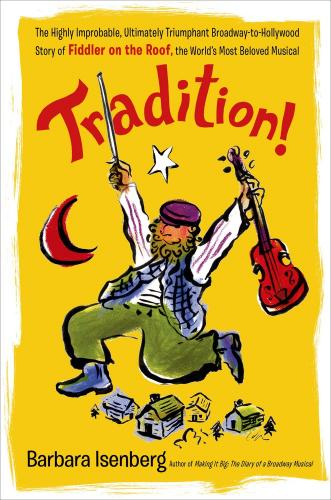 Off Broadway, he became  become the acclaimed star of Ulysses in Nighttown, the much-accoladed play based on the novel Ulysses, where Mostel was even compared to Olivier. He went on to win Tony Awards in 1961for Ionesco’s Rhinoceros; and1962’s  Funny Thing … by Sondheim, Burt Shevelove , and Larry Gelbart. Success followed onscreenin Mel Brook’s The Producers, with Mostel winning a Best Actor Golden Globe.

Mostel was an inspired choice for Fiddler ‘s Teve [as was actress and prima ballerina Maria Karnilova as Golde], but the path to the stage wasn’t easy. In Funny Thing…, the actor had terrible clashes with the equally egocentric Jerome Robbins, whom he despised because of his testimony before the HUAC that ruined careers of many actors. He ridiculed him in front of the cast and in public, and gave him the silent treatment. Yet, somehow a hit emerged.

Though an Orthodox Jew, Mostel wasn’t keen on playing Teve when Stein first approached. His name on a marquee meant ticket sales, and he had other options. As the score grew, especially with traditional Yiddish references, Mostel mellowed. With Robbins aboard, he was leery and wouldn’t commit. Danny Thomas, Alan King, Rod Steiger, Tom Bosley, and Walter Matthau were considered. But Robbins felt none were as larger-than-life as Mostel. He wrote him, “Don’t let me do this show without you.”

Tensions were not as evident this time, but Mostel lectured Robbins on Jewish traditions and Yiddish sayings. The director did his homework. The show was nominated for 10 Tonys, and won nine – including Best Musical. Mostel’s win was his third. In 1972, Fiddler on the Roof became the longest running show in Broadway history, an honor held for eight years.