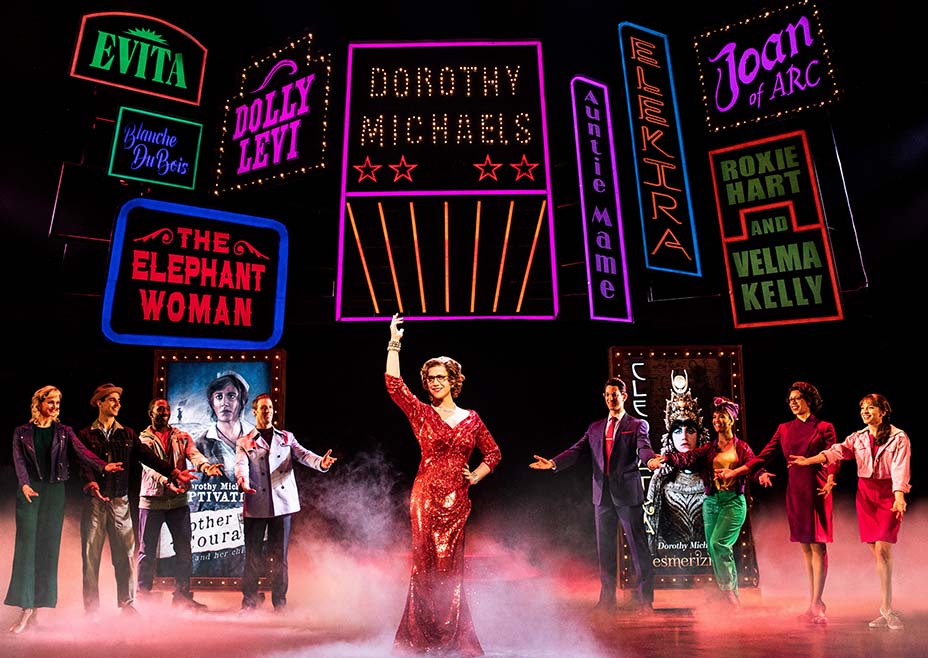 Of course, we’re in the presence of a mastermind event, spearheaded by Dorothy Michaels, otherwise known as the cross-dressing Michael Dorsey. As you know, that’s Tootsie, the Dustin Hoffman role in the 1982 movie, portrayed in this Broadway premiere by Santina Fontana.

In this role Fontana exceeds his already awesome reputation as a leading man. As Dorothy, he’s adorable, and fierce. Fires the show with energy, and enthusiasm. And he is a swashbuckling tenor.

As his roommate/comic sidekick, Andy Grotelueschen keeps us on our toes. Quick, and dynamic, he brings his own comic turn to the role Bill Murray created on screen.

The most outré character, however, is the director of the Broadway musical in which Dorothy stars.  He’s played by Reg Rogers as a twisted, gutted, quivering tyrant. In addition, stage stars Julie Halston (the show’s producer) and Michael McGrath (Michael Dorsey’s agent), masters of comedy, put a new hat on a classic film, and a tale as old as Cinderella.

But it’s the music and the lyrics that carry this aspirational tale set in New York City, about a young man’s dream of becoming an actor. Yazbek’s musical compositions are “text book Broadway” to borrow a phrase from the show’s pretentious director.  The fact is, the show has a colorful oom-pah beat, that is fast paced and sounds like the next generation…or the last, of elevator music.

Having crafted scores for shows like The Full Monty and Woman on The Verge of A Nervous Breakdown, Yazbek has ample experience with probing material. The beauty of Tootsie’s lyrics is in the off-hand, throw-it-away manner that they are crafted.

Take Sandy’s solo, all one sentence and performed with breathless urgency. Here’s an excerpt, “So I won’t have any breakfast, maybe just a little tea, like when you have to go and get a colonoscopy which incident’lly isn’t half as disconcerting or upsetting as going for a part you know there’s no way that you’re getting”.

Book writer, Robert Horn lifts the movie’s humor, which targeted the second wave of feminism, into a contemporary #MeToo tale. The change in tenor is less about the issues women face today, versus then, but in the societal awareness of those issues, and how they are addressed.

Director Scott Ellis pulls off a giddy, fast-paced romp. Along with David Rockwell’s staging – Manhattan skyscrapers that look like they’re made of papier mache – the show is wonderfully playful, and uplifting.