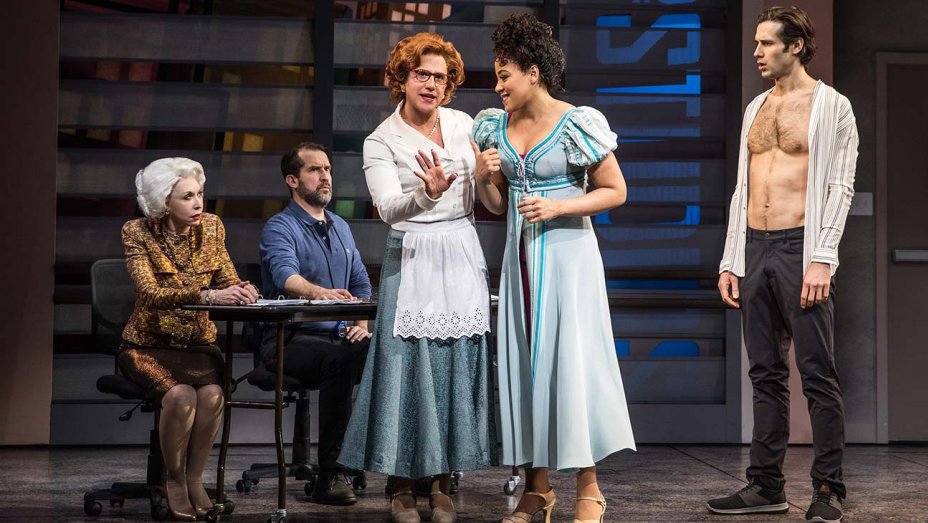 Horn incorporates aspects of the MeToo movement and transgender issues as well as penning new socko quips and jibes, all staged with precision and rhythm by Scott Ellis. Instead of a schlocky soap opera, Michael Dorsey in drag lands a part in a goofy Main Stem musical update of Romeo and Juliet. This afford opportunities for theater jokes and musical comedy cliches. I loved a ridiculous dance number incorporating every choreographic routine seen in every Broadway show for decades, complete with silly names for each gesture. Denis Jones provided the clever dance steps. In addition, the songs are not just shoehorned into a carbon copy of the movie. David Yazbek’s quirky and infectious score creates an individual style indicative of each character.

And what a bunch of characters, enlivened by a cast of on-point stage veterans. Santino Fontana pulls off the acting coup of the season by creating two distinct personalities in the perfectionistic, desperate Michael Dorsey and the assertive, motherly Dorothy Michaels. His female persona is equally credible as his masculine one, as is his falsetto singing voice. Lilli Cooper is a steelier version of the Jessica Lange role in the film, the leading lady Michael inconveniently falls for. As Michael’s neurotic friend Sandy, a delightfully distracted Sarah Stiles nails a frantic Latin-inspired cumber listing her many woes. Andy Grotelusenchen is a master of deadpan as Michael’s playwright-roommate. Reg Rogers continues to employ his Snaggletooth-like delivery to maximum comic effect as the musical-within-a-musical’s obnoxious director. John Belhmann is riotously oblivious as the reality-TV stud star of the musical (another clever change from the movie where the role was of that of an aging Casanova.) The invaluable Julie Halston and Michael McGrath makes their supporting roles of rich producer and fast-talking agent glitter. William Ivey Long’s funny and intricate costumes and David Rockwell’s cartoonish sets make attractive wrappers for this sweet and tasty Tootsie.

While Tootsie makes a new and invigorating stage to screen transfer, Beetlejuice sticks fairly close to the Tim Burton-directed 1988 cult film comedy about an explosively frenetic demon, a lonely Goth girl, and a milk-toast couple of newbie ghosts. But director Alex Timbers’ haunted-house concept makes this show more than just another movie-into-musical. With David Korins’ zany, skewed sets, William Ivey Long’s freakish costumes, Kenneth Posner’s terrifying lighting and Peter Nigrini’s spooky projections, this horror comedy becomes a hilarious theme-park ride, reliving classic sequences from the film (such as the possession scene set incongruously to the Harry Belafonte “Banana Boat” song) and creating scary theatrical equivalents. Eddie Perfect’s score is snarky and smart and Scott Brown and Anthony King’s book retains the film’s joyful embrace of the macabre. But it does not eclipse the original as Tootsie does.

Santino Fontana makes us forget about Dustin Hoffman, but Alex Brightman, despite a gritty and grimy dive into the title character’s supernatural nastiness, doesn’t come close to the volcanic viciousness Michael Keaton spewed out in the original. Despite this, Brightman is a twisted and charismatic guide on this horror ride. Sophia Anne Caruso captures the darkness and vulnerability of Lydia and Rob McClure and Kerry Butler manage to make the meek new specters entertaining. Leslie Kritzer nearly steals the show  with a crafty, multi-layered performance as Lydia’s pretentious stepmom-to-be and a sharp cameo as a demised beauty queen. Jill Abramovitz deserves special kudos for making the most of her brief turns as a plastic trophy wife and a harridan bureaucrat from hell.

Taylor Mac’s Gary is not adapted from a film, but is an irreverent satiric sequel to one of Shakespeare’s lesser-known but bloodiest gore tests, Titus Andronicus. Mac has made a name in the avant-garde world of Off and Off-Off-Broadway as a performer and playwright, bending gender and theatrical rules in such works as Hir, The Lily’s Revenge, and his performance piece A 24-Decade History of Popular Music. Gary is his Broadway debut and makes a bold departure from the the usual Main Stem fare. The slight work stars a trio of major comic actors (Nathan Lane, Kristien Nielsen and Julie White) as minor characters in Titus cleaning up after the massacre depicted in the Bard’s tragedy and ruminating on the role of the average person coping with the elite’s grand messes. It’s an interesting concept and director George C. Wolfe and the brilliant cast do much with Mac’s scatalogical humor (there are plenty of fart, blood, and anatomical gags as corpse-dummies are tossed about) and social observations. White is particularly funny as a palace midwife killed for knowing too much and astonished at being brought back to life. But the play runs out of steam long before its 90-minute running time is done. Santo Loquasto’s gore-drenched set and Ann Roth’s Roman-Empire costumes help, but the combination of low jokes and high intellectualism just doesn’t gel.