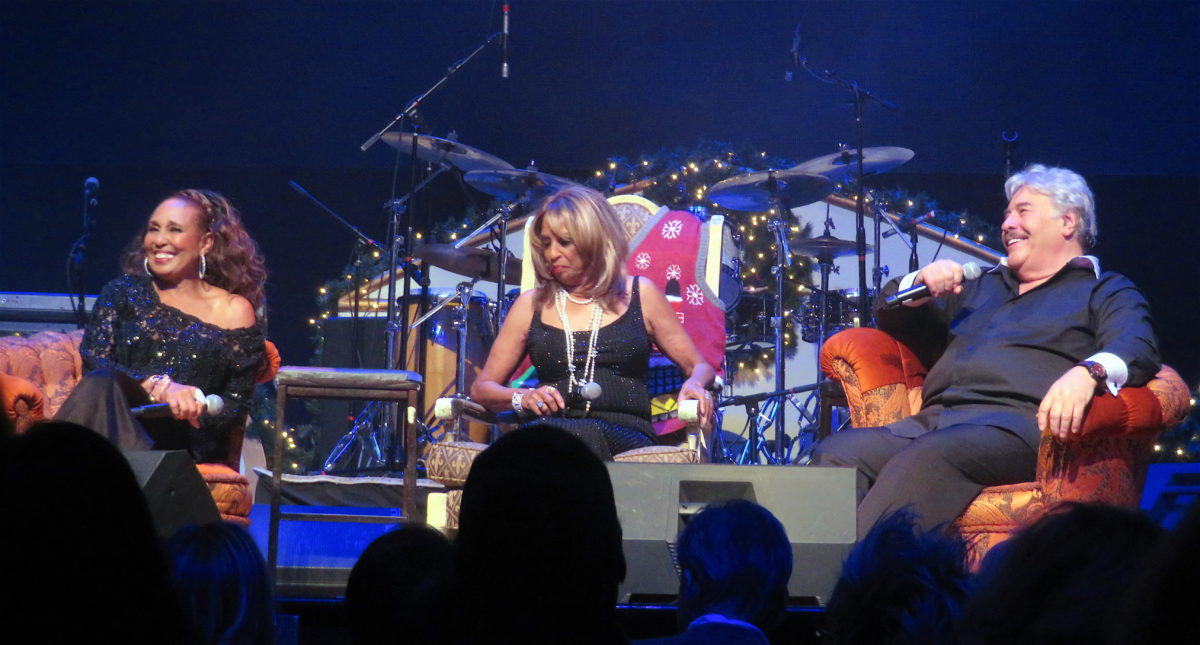 They were staying at the historic Baker Hotel, which incidentally, was the same place my friends and I was staying at.  We all came from separate parts of the country to attend this monumental event:  Hawaii, California, North Carolina and Michigan was in the house.  This was going to be my first time seeing Tony Orlando and Dawn while others have been going to their concerts, off and on, since the 70’s.  Postings on Facebook have resulted in my friends getting to “know” Telma and Joyce who appreciated their effort in keeping the group in the public eyes.

On the night before the show, it was getting late and my friends and I decided to eat at an Italian restaurant across the street that was highly recommended to us by the hotel.  As we poured into the entrance way, we discovered the restaurant was closing within the next half hour. We were about to find a table when we noticed Tony Orlando casually making his way out of the restaurant.  He quickly recognized a few people in our entourage and he graciously stopped to greet us as if we old friends.  It was surreal!  A few seconds later, Joyce Vincent and Telma Hopkins appeared and they, too, recognized one of my friends, who has been one of their biggest fan and supporter.  As we all stood in the entrance way, it turned into a lovefest as everyone hugged, kissed and took photos before they left the restaurant and we finally sat down for dinner. Suddenly, from outside the restaurant, Joyce and Telma, rushed to the window, across from where we were sitting and pressed their lips against it to say their last goodbye for the evening.  Did that just happen?

The following evening, as we were waiting for the show to start, I couldn’t believe how packed the Arcada Theater was. They had not had a hit single since the early eighties and their television show has been off the air since the 70’s but their influence and popularity has not wavered.  Telma Hopkins had moved on from the group and became one of our beloved comedic actresses who has appeared in films (the “Trancers” series, The  Love Guru) and hit television shows like “Gimme A Break,” “Family Matters,” and “Bosom Buddies”.  Joyce Vincent periodically joins Scherrie Payne and Susaye Greene, both Former Ladies of The Supremes, travelling the world with them and performing on stage and in record.  Together, Telma and Joyce, along with her sister, Pam (who sometimes perform with Dawn), has a long history of singing background behind some of the most iconic groups and songs throughout the years; from The Four Tops to Freda Payne, Marvin Gaye and Chairman of the Board.  They sang on many Motown hits and behind the artists at Invictus/Hot Wax.  In fact, that’s Telma Hopkins telling Issac Hayes to “Shut Your Mouth” on his academy award winning hit, “Theme from Shaft.”

Since this was a Christmas show, the stage was decorated with two Christmas trees on opposite ends of the stage.  As they performed, the Christmas songs were non-stop!  Telma and Joyce were given the chance to shine in their solo outings on ‘This Christmas” and “Ave Maria” respectively.  They sung selections from their Christmas albums including “Christmas In New York” and “Mary’s Boy Child,” that I found particularly uplifting with its African tribal beat.  Naturally, Santa Claus came to visit and took over Tony Orlando’s lead position (“I’ve always wanted to sing with Dawn”) to continue his Christmas journey.  Then came the hits: “Candida,” “Knock Three Times, “ “He Don’t Love You (Like I Love You), “Say Has Anybody Seen My Sweet Gypsy Rose” and of course, the song that became the anthem of American veterans returning home from war, “Tie A Yellow Ribbon ‘Round The Ole Oak Tree.”   The impact that song had on the careers of Tony Orlando and Dawn was evident as Mr Orlando spoke of the time Bob Hope invited them to perform that song during one of his troop visits. Ever since that time, Tony Orlando has been raising money doing charity work for veterans, thanking them for their service and sacrifice across the world.  That sentiment permeated the show as he asked veterans in the theater to stand so that they could be acknowledged.

As the show ended, Ron Onesti, the owner of the Arcada Theater, held a revealing but heartwarming onstage interview with Tony, Joyce and Telma.  Tony Orlando expressed how it meant to have Joyce and Telma return to the stage with him.

“Without them, I would absolutely not be who I am today.  Their talent is beyond anything I have ever seen and they have been my family…”

Tony Orlando pointed out their individual successes (as mentioned earlier) and revealed how they named the group “Dawn” (after the daughter of a man who was the head of the promotional department so that he can “get in good with him.”)  Another bit of trivia:  “Knock Three Times” actually sold more records than “Tie A Yellow Ribbon!”

As the group left the stage, audience members lingered in the theater in hopes of seeing the group one last time. However, Telma Hopkins had actually told us BEFORE the show that they had to rush out after their performance to catch a bus to their next gig.  We had bought Joyce Vincent cupcakes to celebrate her upcoming birthday so Telma said it might be possible to do it immediately after they got off the stage.  So as we waited for Telma and Joyce to appear, it was announced to everyone that they, along with Tony Orlando, would come out and quickly pose for pictures.  You don’t see this offer from other entertainers; unless it was to make a quick $20.00 per person.  Their generosity and love for their fans was genuine.  A line quickly formed from the stage to the rear exit door with excited fans.  We waited until the end to present Joyce with her cupcakes then we turned the table on her and sang “Happy Birthday” to her. Tony, Joyce and Telma were equally surprised and delighted when one of my friends, gave each of them a T-Shirt bearing the photo from their first album, “Tuneweaving.”

We returned to our hotel, still amazed by the show and its aftermath, but we began to realize we didn’t eat dinner.  We sat in the lobby and discussed where to go for a late dinner and decided, instead, to stay in and order a deep-dish Chicago style pizza.  As we waited for the delivery, we saw Joyce, Telma and Tony trickling out of the hotel’s elevator, individually, as they made their way to the bus that was waiting to take them to their next destination.  Tony Orlando surprised us by wearing the TShirt that was given to him after the show.  He once again thanked us for supporting him, Joyce and Telma and posed for one last photo before he disappeared.  We all looked at each other and at our chance encounters with Tony, Joyce and Telma.  It felt like our trip to St Charles, IL was truly a miracle.  There really is a Santa Claus.