June 14, 2018:  It had been one of the better Tony Awards in recent memory. The hosts Josh Groban and Sara Bareilles were funny and charming, and not the disastrous Kevin Spacey of the year before or the over used Neil Patrick Harris or Hugh Jackman. The pop duo even wrote their own original musical material. The numbers from the nominated musicals showcased their respective shows with wit and precision. 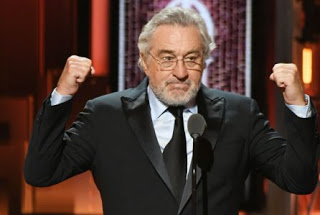 June 14, 2018:  It had been one of the better Tony Awards in recent memory. The hosts Josh Groban and Sara Bareilles were funny and charming, and not the disastrous Kevin Spacey of the year before or the over used Neil Patrick Harris or Hugh Jackman. The pop duo even wrote their own original musical material. The numbers from the nominated musicals showcased their respective shows with wit and precision. Acceptance speeches were short and the orchestra cut-offs were ruthless at times–Harry Potter playwright Jack Thorne did not get to speak at all, but mostly winners appropriately thanked their colleagues. Any political messages were subtle and not obscene or blatant. In one stunningly moving sequence, drama students from Marjory Stoneman Douglas High School in Parkland, Florida who had suffered through a horrific school shooting sang “Seasons of Love” from Rent to honor their teacher for winning a special Tony Award. Nobody carried a Gun Control protest sign or pointed out that two years ago the Tonys were overshadowed by the Orlando Pulse Nightclub massacre. The kids singing got the message across.

Glenda Jackson in her speech for taking the Best Actress in a Play category for Three Tall Women praised the Parkland children and indirectly criticized the current administration stating that “America has always been great.” Tony Kushner in receiving the Best Revival of a Play Award for Angels in America, exhorted viewers to vote in November without explicitly advocating for an overthrow of the GOP in Congress. Andrew Garfield, winning Best Actor in a Play for Angels, slammed the recent Supreme Court decision siding with the homophobic baker against the gay couple who wanted a wedding cake. Harry Potter director John Tiffany got the entire Radio City Music Hall audience to sing Happy Birthday to his boyfriend. All very cozy, nothing objectionable. There was even a commercial with a lesbian wedding. Maybe a few rigid people in Middle America turned off their sets, but no one could accuse the Tonys of being overly political.

Then Robert De Niro came on stage to introduce Bruce Springsteen. “I just want to say one thing,” the Oscar winner began and his lips were suddenly moving but nothing came out. The audience screamed, stood and cheered. Twitter and Facebook exploded asking what had happened. From my couch I could make out what De Niro seemed to be saying and it was “Fuck Trump.” He doubled down and added “It’s no longer Down with Trump, it’s Fuck Trump.” CBS was able to censor the remark since the broadcast was on a seven-second delay. But the star’s incendiary blast was heard nonetheless.

On Twitter, I predicted that the right-wing media would castigate De Niro–“Can you imagine if someone had said Fuck Obama?,” they’d be saying–and the entire Broadway community for giving him a standing ovation. They would accuse the ritzy New York crowd of being out of touch with real Americans and of being traitorous for scorching an American president just as he is about to go into a major summit with the North Korean leader Kim Jong Un. De Niro may have been specifically reacting to Trump’s boorish behavior at the G7 meeting, or his recent claim that he has the power to pardon himself, or the policies which separate immigrant children from their families and lock them up in little cages like animals. Or all of the above. Unfortunately, De Niro’s outburst may have elated Trump opponents like me for a few moments, but it also served to push Trump supporters further into his arms. The previously noted actions were more effective in registering our dissent.

This is what I wrote on Facebook in response to a comment calling the actor’s scream “high school boy silliness”:

“I think De Niro should not have done it. I do understand the rage behind it because I feel it myself. Trump represents bigotry, dishonesty and ignorance to me. To his supporters, he doesn’t; they see him as an economic savior and they either ignore his racism or they endorse it. I don’t believe every Trump booster is a racist pig, but I’m angry that this dishonest pig of a man is representing the USA and I’m ashamed to be an American because he’s president. It would have been more constructive for De Niro to say something like ‘We in the theater embrace gays, people of diverse backgrounds, immigrants, and love. Our president does not. The kids from Florida who sang survived a mass shooting at their school and our president does not want to do everything he can to protect them because he is beholden to the NRA and the gun lobby. We want everyone watching to know we embrace love in the theater and the president does not.’ “

Perhaps De Niro went too far, but he has the right to express his views at an awards show or anywhere else.