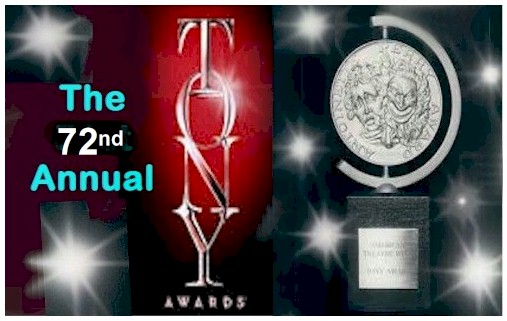 “It’s Broadway’s biggest event,” says Ms. St. Martin, “and, rightly so. It will be a starry, starry night seen in 45 countries (which include Argentina, Australia, Brazil, China, France, Japan, Mexico, New Zealand, the Philippines, and the world-wide Armed Forces TV Network). We welcome Sara Bareilles and Josh Groban to an illustrious roster of Tony hosts.”

This has been a season of particular highs with the move to Broadway of A Band’s Visit, blockbusters Frozen and Harry Potter and the Cursed Child, a season of nine classic and much-acclaimed revivals – probably a record, and the year that Tina Landau’s dream and vision of a different kind of musical came to be – SpongeBob SquarePants, after 10 years of development. And if you want to know where the best-dressed gals are, check out the August Wilson, where you’ll also revel in one of the season’s outstanding comic turns by Mean Girls’ Grey Henson. While welcoming back Lauren Ambrose (My Fair Lady), Glenda Jackson (Three Tall Women), Diana Rigg (My Fair Lady), Nathan Lane and Andrew Garfield (Angels in America, Parts One and Two), David Yazbeck and Tony Shalhoub (Band’s Visit), and Denzel Washington (Iceman Cometh), we can also celebrate the return to the New York stage of Tony winner Norbert Leo Butz, Showstopper of the Year for his Alfred Doolittle in My Fair Lady. We can also feel for the masses who missed one of the most offbeat and well-acted plays of the year, The Children.

Bruce Springsteen will make not only a rare TV appearance in appreciation of his Tony honor for Springsteen on Broadway, but also perform. He will be introduced by old friend Billy Joel.

Production numbers by the casts of Tony-nominated shows The Band’s Visit, Carousel, Frozen, Mean Girls, My Fair Lady, Once on This Island, SpongeBob SquarePants and SUMMER: The Donna Summer Musical. Returning for a performance is 2017 Tony-winning musical Dear Evan Hansen.

Once On This Island is set in a tropical village in the aftermath of a storm, and at the Tonys like audiences at Circle in the Square, the Tony-nominated Revival of a Musical will be host 130 volunteers and staff from U.S.-based 501(c)3 non-profit organizations bringing relief to areas impacted by natural disasters: All Hands Volunteers, Americares, and UNIDOS Disaster Relief and Recovery Program. They’ll be onstage on a sandy beach with lagoon, water, goats, and chickens. “Our performance is dedicated to those who give of themselves to help put homes and hearts back together,” says producer Ken Davenport.

To make way for more entertainment, Creative Arts Awards and Special Honors will be distributed in an hour pre-telecast portion that will be seen on NY1 News and www.TonyAwards.com. Highlights will appear during the telecast.

At the Broadway League, Tom Schumacher is chair and Charlotte St. Martin is president; at the American Theater Wing, Heather A. Hitchens is president and CEO.

In the U.K., Olivier-winning Elaine Paige will host a special program on BBC Radio 2, which will include telecast performances. The Tonys will be seen throughout Canada live and time-delayed. In many countries, the Awards will be seen within a week of the event.

For a complete list of the nominations, a printable ballot for your picks to win, video features and interviews, trivia, and a history of the Awards and the Awards namesake Antoinette Perry, go to www.TonyAwards.com. Revival, Musical – Carousel, My Fair Lady, Once On This Island