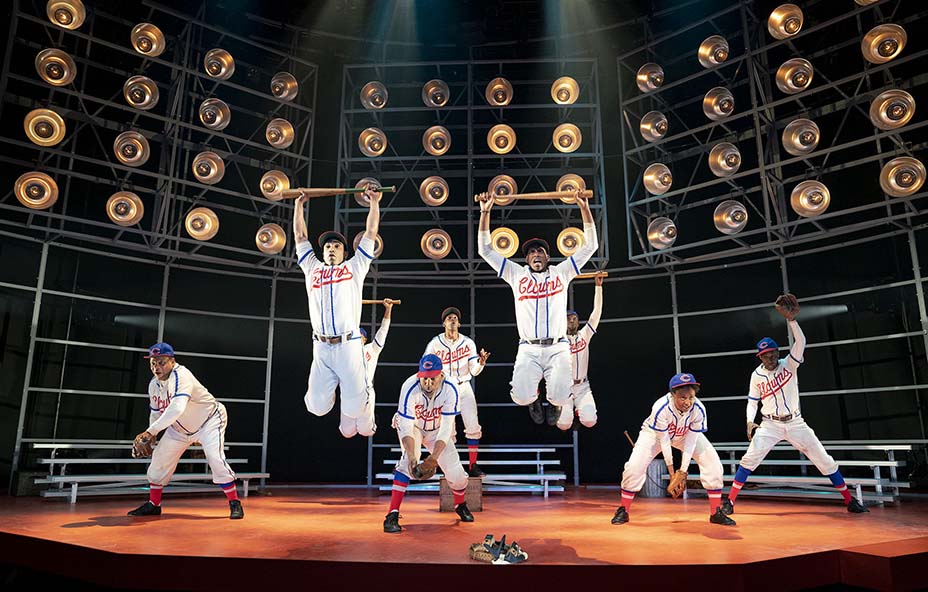 The company of “Toni Stone”

In a different way, so did Toni Stone, the first African American woman in the Negro League. In the titular play by Lydia R. Diamond, currently at the Roundabout Laura Pels Theatre, Stone is portrayed for her struggles on the all-male baseball teams of her day.

Diamond’s gift for dialogue, capturing Toni’s down-home quality and the baseball players’ lingo, gives the show its rhythm, sting, and humor. Introducing herself at the opening of the play, Toni tells us, “I’m not a big talker.  I talk a lot, but I don’t talk big. I have pride, but I wouldn’t say I’m proud… Don’t think I’m bragging when I tell you that I do the things I do well, bettern’ anybody.”

Reaching beyond the racism, sexism, and adversity with which she was faced, is the heart of this portrait. While Stone began playing semiprofessional baseball at the age of 15, the focus here is on her trajectory to the Indianapolis Clowns, where she replaced Hank Aaron.

As portrayed by April Matthis, Stone is a quirky character, and an ineffable force. Judged as being a slow learner in grade school, she delivers the stats on every baseball player, negotiates with management, and finesses her survival on the all-male team. Like her male teammates, Stone was not allowed to sleep in most hotels, and suffered the abuses of the Jim Crow laws that prevailed in many of the states where they played. As a woman, she also endured the bigotry and transgressions of her male colleagues.

In portraying Stone as a clown, mirroring the Chaplinesque qualities of a tramp, Matthis is marvelous. She’s good-hearted, but cunning, with a sassy disrespect for authority. As the program notes explain, an Indianapolis Clown game was accompanied by entertainment. Like the Harlem Globetrotters, their hallmark was physical comedy.

Demonstrating athleticism, The Clowns would incorporate bursts of imaginary baseball, -exaggerating their physical moves, bungling, and bumbling with comedic timing. Structuring the play around their performance art, Diamond finesses a narrative that is multifaceted, and fast-paced. At the same time, the historical context and insights are shocking, and often unsettling.

Deftly directed by Pam MacKinnon, Stone’s commentary attached to the action serves as something of a Greek chorus. Indeed, She was the ideal spectator of her own unique life. And she is portrayed admirably for juggling professional life, marriage, and her own inspired ideals.

Team spirit rules on this stage, with the players performing variety acts that are Vaudeville-like in spirit. Several actors, an ensemble of eight men, play the various characters. Most outstanding, Phillip James Brannon’s King Tut is effecting in his disillusionment. And Kenn E. Head as Millie, Toni’s female confidant, is a hoot in her baggy dresses. Mr. Head is transfixing, alternating between his role as baseball player and the prostitute, who becomes Toni’s confidant.

Costumes by Dede Ayite consist primarily of baseball uniforms, with Stone throwing a man’s blazer over hers. Her life is played out on the wooden stage, a highly compact version of a baseball field, designed by Riccardo Hernandez.

It’s her reach that prevails. Matthis hits it out of the park.