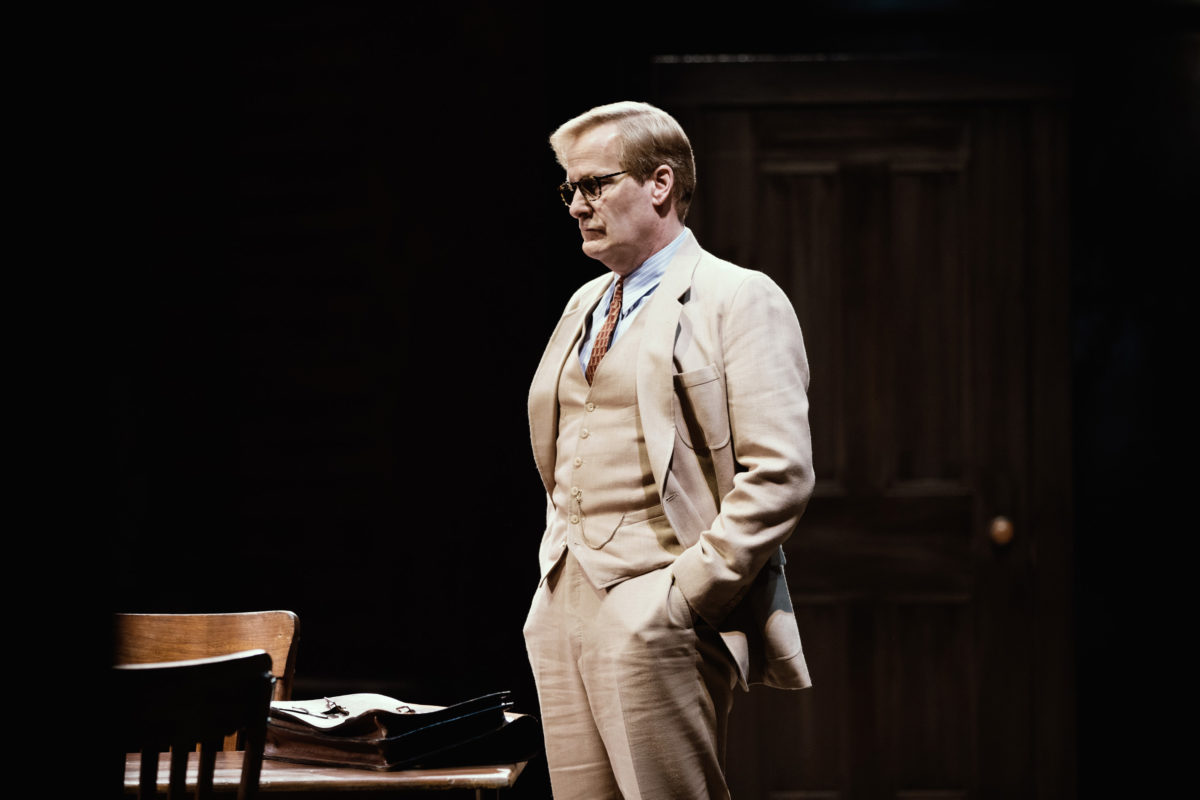 To Kill A Mockingbird, Harper Lee’s novel, along with Horton Foote’s film adaptation, have engrained this tale, about an innocent black man, murdered trying to escape an unjust penal system, in the American psyche. It’s as fundamental to our cultural awareness as classical Greek theater was to its audience. Its Broadway premiere, adapted to the stage by Aaron Sorkin remains true to the novel, although with some significant changes.

Fueled by a powerful ensemble of actors, it’s a mesmerizing production. As Atticus  (also the nickname of a philosopher friend to Cicero in ancient times) Finch, Jeff Daniels maintains a consistent, albeit ambivalent presence. In his soft spoken way, he turns from an idealistic lawyer, to a man deeply disillusioned with the law – its ineffectual treatment of white supremacy, as well as its inability to control racial violence.

As his foe, the Klansman Bob Ewell, Frederick Weller holds us in a state of constant tension, portraying the irascible, slimy man, driven to destroy Robinson (Gbenga Akinnagbe), and if he needs to, Atticus, and his children.

Here, Scout (Celia Keenan-Bolger), plays Atticus’ daughter, and to a lesser extent than in the novel, the narrator. She observes wrong doing form a child’s perspective, and while the events shatter her innocence, she remains challenging, provoking the audience to question fundamental concepts, such as good and evil, and justice versus revenge. But her role, in this production, is overshadowed by Atticus, who is forced to confront his fundamental belief that there is good in all people. By the end, he seems disparaged –  a man falling under the weight of his own belief system.

That Ewell’s attempt to revenge himself on Atticus by killing his children is thwarted, is the work of a character who we only see at the play’s conclusion. But, Boo (Danny Wolohan) is spoken about, throughout the play as a strange man, like a monster. That he saves Scout, and her brother Jem’s (Will Pullen’s) lives, tells us something about how we misjudge people.

Not to be forgotten, Latanya Richardson Jackson, as Calpurnia, the wise, and intuitive maid to Atticus’ family, shines with a depth of understanding that greatly exceeds her position in small town Southern society, of the 1930s. She even challenges Atticus, finding him weak in resisting the racial violence that now attacks him. Clearly, this is a more contemporary way of depicting a character who, as originally drawn, would appear  as a stereotype today.

Director, Bartlett Sher builds a story rife with ambiguity. For whatever justice is achieved, Robinson’s death cannot be forgotten. It leaves the audience with a troubling feeling.