December 24, 2018: Harper Lee’s To Kill a Mockingbird (1960) is a beloved American classic. Taught in high schools for decades, it recently won a much-publicized PBS poll as the country’s favorite novel. The touching story of a young girl learning hard adult lessons in a Depression-wracked Alabama town through the sage humanity of her compassionate widowed father has been immortalized in an Oscar-winning 1962 film and licensed for community and school groups in an adaptation by Christopher Sergel, but never seen on Broadway. Apparently, Lee’s original story has been deemed out-of-date by new adapter Aaron Sorkin (The West Wing, A Few Good Men). 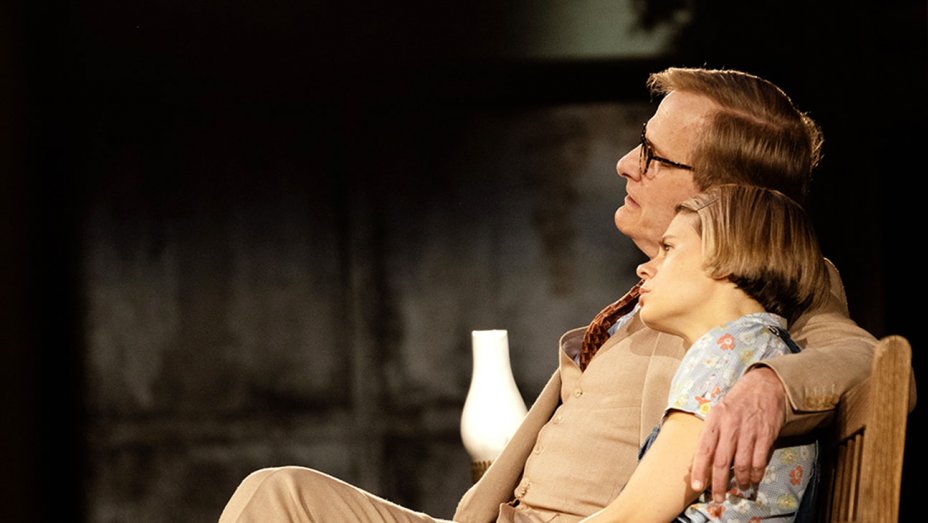 Jeff Daniels and Celia Keenan-Bolger in “To Kill a Mockingbird”

Harper Lee’s To Kill a Mockingbird (1960) is a beloved American classic. Taught in high schools for decades, it recently won a much-publicized PBS poll as the country’s favorite novel. The touching story of a young girl learning hard adult lessons in a Depression-wracked Alabama town through the sage humanity of her compassionate widowed father has been immortalized in an Oscar-winning 1962 film and licensed for community and school groups in an adaptation by Christopher Sergel, but never seen on Broadway. Apparently, Lee’s original story has been deemed out-of-date by new adapter Aaron Sorkin (The West Wing, A Few Good Men).

The basic spine of the plot remains the same. Six-year-old Jean Louise Finch, nicknamed Scout, recounts the memorable summer when her dad Atticus bravely defended Tom Robinson, an African-American man wrongfully accused of raping a white woman. Scout discovers the inherent racism of her town and the basic kindness of her spooky recluse neighbor Boo Radley as she and her brother Jem and flighty visiting friend Dill (based on the young Truman Capote) take a painful journey from childhood into maturity. In order to make the material palatable for a modern audience, Sorkin has made significant alterations (Lee’s estate objected and engaged in legal challenges which were ultimately resolved). Atticus is no longer a white knight rescuing the one-dimensional black community with saintly benevolence. Now he condescends to the black characters and naively underestimates his fellow white citizens’ bigotry. Much of the dialogue feels imposed including contemporary references to passive aggression and psychological motivations. In addition, Sorkin hits the audience over the head with characters explaining their feelings in italics with exclamation points.

What emerges is a bizarre triple-lensed view of Lee’s work. We are looking at a story set in 1934, via Lee’s 1960 perspective then filtered through Sorkin’s 2018 sensibilities. In order to give the African-American community a stronger sense of agency, the role of Calpurnia, the Finches’ black housekeeper, has been beefed up. She now is on an equal footing with Atticus and they are described as being like siblings, not boss and employee, with their racial status differences totally wiped out. When Calpurnia speaks as the voice of 21st century outrage, it sounds like Sorkin talking, not the character.

The racist Bob Ewell, father of the supposed rape victim Mayella, becomes a spokesperson for aggrieved lower-class whites and anti-Semitic taunts have been added to his arsenal of invective. In the most egregious change, Atticus explodes at Ewell, twisting his arm and berating him as a lowlife (Atticus Finch—Action Hero!). This physical confrontation may be satisfying for a modern audience accustomed to violence rather than words, but it’s untrue to the restrained and dignified Atticus of the book.

Despite these radical alternations, the evening succeeds in grabbing the audience. Sorkin’s script is fluid and punchy and director Barlett Sher delivers his usual streamlined production. Miriam Buether’s flexible set conveys a multitude locations with shifting speed and efficiency. Though they occasionally overplay Sorkin’s preachy and obvious moments, the company creates a convincing and complex community. Jeff Daniels is a compassionate Atticus, while the adult Celia Keenan Bolger skillfully handles the difficult assignment of playing a child and narrating the action. She shares those duties with Will Pullen’s feisty Jem and Gideon Glick’s delightfully talkative Dill. LaTanya Richardson Jackson manages to make Calpurnia more than a megaphone for Sorkin’s contemporary comments and Frederick Weller finds the twisted violation inside Bob Ewell’s hatred. There are also memorable moments from Gbenga Akinnagbe’s reserved Tom Robinson, Erin Wilhelm’s multifaceted Mayella, Dakin Matthews’ sage Judge Taylor, and Neal Huff’s deceptively sober town drunk. Thanks to this estimable cast and director, the show builds to an emotional and cathartic climax, but this Mockingbird is more politically correct than powerful.

Another Broadway production examines the relationship between varying versions of a text. While Mockingbird imposes contemporary mores on a classic work, The Lifespan of a Fact focuses on how a writer’s loose interpretation of the truth can muddy his work. Based on an actual incident, this tidy, 80-minute play concerns the clash between an obsessive researcher and an overly creative essayist. When fact-checker Jim (comically anal Daniel Radcliffe) is assigned by venerable editor Emily (no-nonsense Cherry Jones) to verify the facts in a think piece on a young man’s suicide in Las Vegas by esteemed, prickly author John (superbly grouchy Bobby Cannavale), strict accuracy rams up against dramatic license. The compulsive Jim discovers endless errors in John’s supposedly shattering, heavily detailed portrait of despair, but John insists he has captured the essence of the story and will not budge on any making any edits. Director Leigh Silverman wrings every drop of comic possibility and dramatic nuance from the compressed script by Jeremy Karen, David Murrell and Gordon Farrell. Many thought-provoking issues of journalism, the writer’s craft, and multi-media culture are raised, but not examined with depth. Like Mockingbird, Fact is theatrically professional and well put-together, but doesn’t go as far as it could in exploring its subject.

Clueless, an Off-Broadway musical based on the 1995 cult film comedy, has no pretensions of depth and aspires to nothing more than nostalgic giggles. Much is made of old-fashioned tech with flip phones and AOL gags, but that’s only good for a brief chortle of recognition. Unlike similar teen tuners such as Tina Fey’s Mean Girls and the new Broadway show The Prom, Clueless has no urgent plot engine. Inspired by Jane Austen’s Emma, Amy Heckerling’s script based on her own screenplay centers on good-hearted rich girl Cher as she plays matchmaker for her friends and teachers, but comes up short when it comes to her own romantic pursuits. Heckerling has added uninspired parody lyrics to pop songs of the era for the score (“I feel like such a flop/All he thinks I can do is shop” is a typical feeble refrain). The result is a mildly amusing romp with many dull stretches. Kristin Hanggi’s direction lacks pace and snap while Kelly Devine’s choreography resembles an aerobics class. Fortunately, Dove Cameron is charming, vibrant and game enough to make us care a smidgen about Cher’s machinations. Unfortunately, there is no chemistry between her and the bland Dave Thomas Brown as Josh, Cher’s ex-step-brother with whom she ends up (which is kinda creepy if you think about it.) Amy Clark’s witty costumes provide more smiles than the book and a hard-working cast pushes the punchlines, but if you can see the sweat, the laughs aren’t gonna be there.