Experiments with time, space, and staging can illuminate or obscure a playwright’s intent. Three current productions on and Off-Broadway juggle with traditional concepts with varying results. 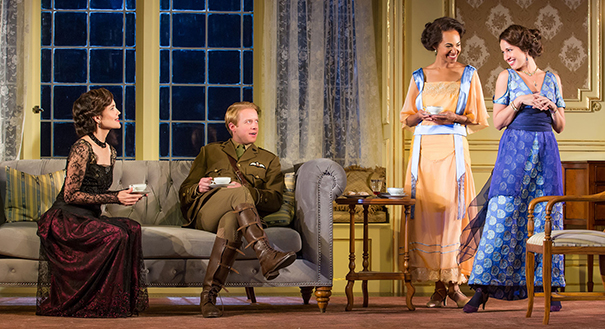 Experiments with time, space, and staging can illuminate or obscure a playwright’s intent. Three current productions on and Off-Broadway juggle with traditional concepts with varying results. The most conventional of the three is Roundabout Theater Company’s revival of J.B. Priestley’s Time and the Conways. This is the first time the time-tripping British family drama has been seen on Broadway since 1938. Priestley had written several plays exploring in heavily ironic terms how seemingly unimportant acts can have devastating effects. Stephen Daldry’s surrealistic interpretation of Priestley’s An Inspector Calls, wherein an upper-middle-class family is indicted for lack of social responsibility by a mysterious policeman, proved a huge hit on both sides of the Atlantic in the 1990s.

Rebecca Taichman’s production of Conways for Roundabout Theater Company is far less way-out than Daldry’s nightmarish vision and the impact is not as devastating, yet it still produces a sting of recognition and sadness. The story is relatively simple: a contented bourgeois clan in an English provincial town looks forward to a bright future as World War I ends and daughter Kay celebrates her 21st birthday. The twist comes in the second act as we jump forward almost 20 years to 1937. Not surprisingly each of the six Conway offspring and their flightly mother are leading miserable lives. For the third act, we double back to Kay’s party in 1919. All their rosy predictions ring hollow since we know the dismal outcome. Kay and her sanguine elder brother Alan may have a chance at happiness since both have a glimmering of the second-act vision.

Taichman’s direction is tight and measured, though she does allow some of the cast to limn their upper-crust cluelessness a bit too broadly. There is an arresting coup de theatre between the two eras as Neil Patel’s golden-hued living room (brightly lit by Christopher Akerlind) recedes into the back of the theater to be replaced by a melancholy, blue version descending from the flies. The 1919 version of the set can be glimpsed through the windows creating a visual equivalent of Priestley’s vision of the past and the present overlapping each other.

As the matriarch, Elizabeth McGovern gets top billing and the only solo curtain call because of her Downton Abbey fame. She delivers a creditable portrait of the impulsive, child-like Mrs. Conway. But the bulwark of this production is Charlotte Parry’s conflicted Kay, the only sibling aware of the crushing demands adulthood can bring. She intensely charts Kay’s struggle to comprehend the vagaries of life and her final moments of attempting to reconcile youthful optimism with mature reality are heartbreaking. There are also moving moments from Gabriel Ebert’s compassionate but weak Alan, Steven Boyer’s blustery son-in-law, Brooke Bloom’s disappointed radical daughter, and Anna Baryshnikov’s life-affirming, yet doomed Carol, the youngest. Though the ironic storyline is predictable, particularly in the third act, this is Time well spent.

Elevator Repair Service takes a more radical approach in its breakneck rendering of Shakespeare’s Measure for Measure. ERS has previously tackled such literary giants as Fitzgerald, Hemingway, and Faulkner in imaginative realizations of these authors’ classic works. In this bizarre production at the Public, they take on the Bard for the first time armed with projections of the text and a caffeinated pace. Director John Collins imposes a meta sensibility, throwing out conventional staging. He assumes we know the plot of the publicly moral and privately corrupt Angelo forcing himself on the virginal Isabella in return for her brother Claudio’s life. (With the recent revelation about Harvey Weinstein, these forced seduction scenes are particularly relevant.)

With the words of the script rapidly scrolling on Jim Findlay’s utilitarian set, the cast races through the dialogue striking exaggerated stereotypical poses and posturing in mock “Shakespearean” style. Some speak with stagey British accents like Monty Python characters on amphetamines. The idea may be to comment on overused methods of Elizabethan stagings and there is a sort of fascinating slickness to the approach, but it negates the wit and the still-relevant sharp commentary on government hypocrisy. Yet just as Collins’ quirky concept wears thin, the speed-freak patter slows down during the jailhouse scene between Isabella and Claudio (a stunningly real Rinne Groff and Greig Sargeant). She has to tell her brother he must die because she’s refusing Angelo’s vile offer. Speaking deliberately and slowly on old-fashioned French telephones, they connect on such an honest level it’s as if they’re in a different production. The contrast with the self-conscious previous scenes increases the emotional resonance and temporarily brings a stunning authenticity to this Measure, but the rest is a showy, if interesting gimmick.

The message is also lost amidst flashy direction in the stage version of Anthony Burgess’s groundbreaking dystopian novel A Clockwork Orange, now at the multiplex theater New World Stages in a transfer from London’s West End. Alexandra Spencer-Jones’ highly-stylized staging employs sleekly choreographed mayhem and fisticuffs to Emma Wilk’s ear-splitting soundscape incorporating classical musical and ’90s pop tunes. The all-male ensemble displays impressive pecs and abs as they go through their perfectly timed gut punches and kicks to the groin. Jono Davies, who also serves as fight captain, exudes a raw, nasty charisma as Alex, the rancid-soulled teen transformed via a government experiment into a law-abider, ending up as out of place as the title oxymoron. It’s entertaining and flashy, yet Burgess’ themes of free will versus social safety are lost amid the biceps and jetes. It’s an attempt at combining a Chippendales revue with 1984, but only the former emerges strongly.