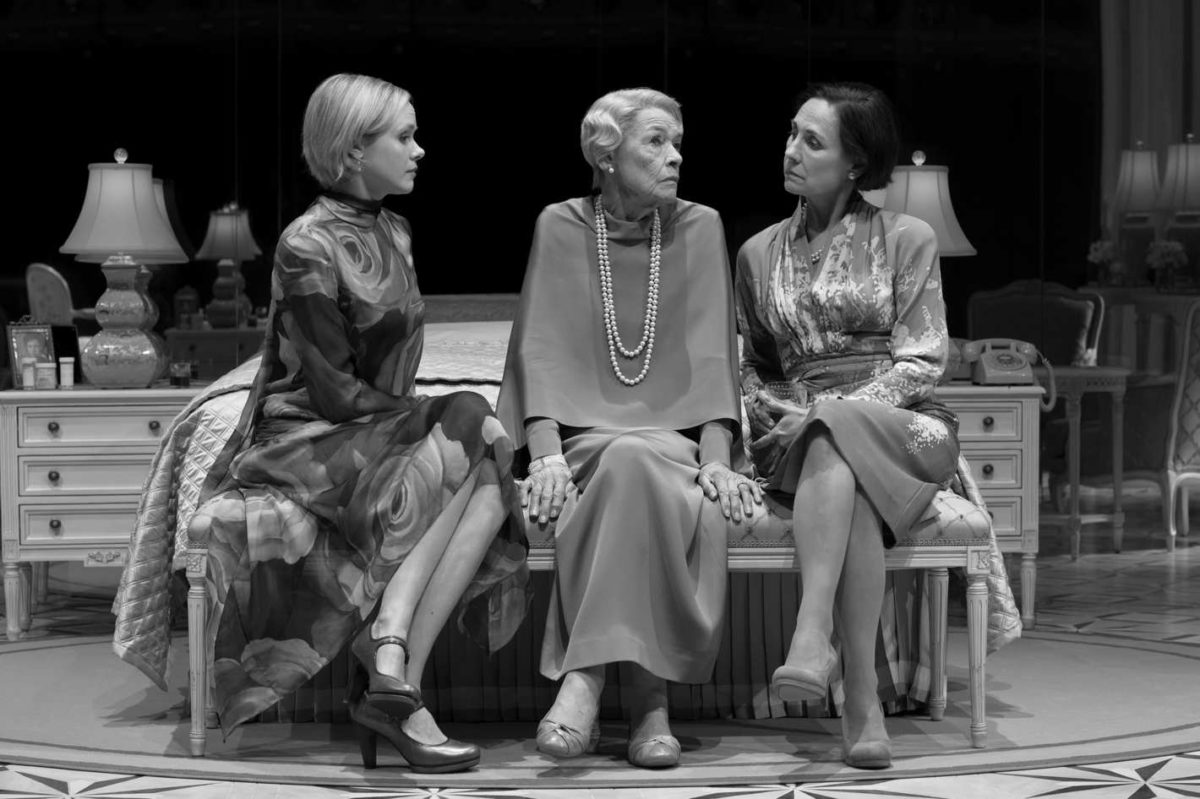 While the characters are nameless, Glenda Jackson plays A, Laurie Metcalf, B, and Alison Pill, C, they clearly are not faceless. As the play opens, Jackson, an embittered old lady, is barely hanging on. By the second act, after a stroke, she (or her double) lies speechlessly, and motionlessly in bed. But that doesn’t keep her from chiming in constantly about her deceased husband, her son who later comes to visit, her finances…you name it. Jackson portrays C with lots of energy and jaded wit, rattling off her sarcasms, and name calling with invidious delight.

Along with her upright conservative values, Jackson’s character spews racial slurs, defecates in her chair, and acts out at her lack of control. Revealing, in an absurdly humorous story, the grotesque values of her ilk, she reminisces about her husband’s gift of a diamond bracelet. While sitting naked, with only gobs of jewelry, he approaches her with “a wide, so wide” diamond bracelet hanging from his “hard peepee.”  Clearly, she wasn’t an innocent. And he was a victimizing husband, described as “the little one-eyed man,” with “the morals of a sewer rat.”

Yet C (Alison Pill) tries to maintain the veneer of dignity. That is, in spite of society’s victimizing, and false promises. As Metcalf‘s older character expresses it, “Twenty-six to fifty-two? Double it? Double your pleasure, double your fun?”… “They lie to us. They tell us we don’t change.”  The Tony and Emmy Award-winning Metcalf is at her comedic height here, in a performance that is loose-limbed, kooky, and free spirited, in spite of the straight-laced, amoral parent C is.

Still, the underlying dread of morphing from C to A, from youth to old age, is devilishly present here.  As Metcalf tells Jackson about Pill, “she wants to know how she turned into me. And next she’ll want to know how I turned into you.” From a feminist perspective, the conversation is about growing old and losing one’s looks, a painful process for a beautiful woman. From a psychological point of view, it expresses the fear of becoming that stingy conservative old lady who won’t hand over the inheritance, and who makes us dread what we may become.

Within the interchangeable nature of A, B, C, lie familiar Albee themes about identity, and the ability to define oneself. In addition to the dying yet omnipresent Jackson, there is a sense that each of the characters is removed from themselves, as in an outer body experience. Perhaps they are all versions of A, who we are seeing in various stages of her life. At the same time, they reflect the impossibility of being oneself, or even finding oneself.

In Miriam Buether’s elegantly appointed bedroom suite, a full-size mirror – transcending the boundaries of the proscenium stage – holds us, the audience, up to our own eyes. And Ann Roth’s costumes express the identity of the characters simply. Jackson elegantly clad in lavender, Metcalf comfortably attired in sneakers and slacks for most of the play, and the long-legged Pill in fashionable business desire.

Indeed, the brilliance of the acting shines through in this marvelous production. Jackson especially, a vibrant and accomplished actor, spins through her web of tangled thoughts and half remembered stories with ease and vigor.

In spite of the humorous and spirited fun on stage, the moral is tough. With the mirror peering into the audience, as we peer at the actors, we share the loneliness in which life ends. But we also share a sense of relief, when we can finally stop looking, and simply know.