April 8, 2018 – Recycling continues to be the main mode of operating on Broadway. Two American plays (Three Tall Women, Lobby Hero) are making their belated Main Stem debuts after successful Off-Broadway engagements roughly two decades ago and yet another Disney cartoon (Frozen) is transitioning to the live stage. Meanwhile Off-Broadway, a brand-new work (Admissions) is challenging conventions and rigidly-held beliefs in a production that induces both laughs and squirms of discomfort. The Broadway revivals do the same, but it’s indicative of our large-scale commercial theater that fresh innovation is confined to our smaller stages. 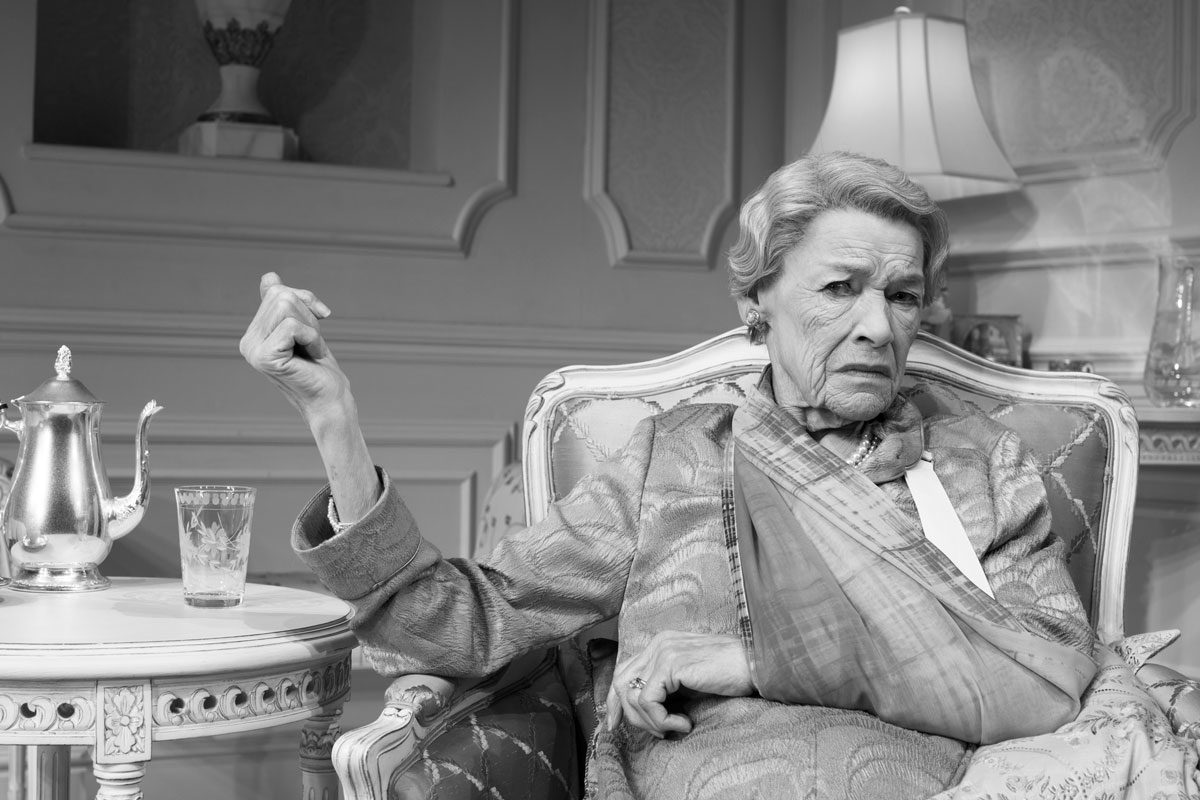 April 8, 2018 – Recycling continues to be the main mode of operating on Broadway. Two American plays (Three Tall Women, Lobby Hero) are making their belated Main Stem debuts after successful Off-Broadway engagements roughly two decades ago and yet another Disney cartoon (Frozen) is transitioning to the live stage. Meanwhile Off-Broadway, a brand-new work (Admissions) is challenging conventions and rigidly-held beliefs in a production that induces both laughs and squirms of discomfort. The Broadway revivals do the same, but it’s indicative of our large-scale commercial theater that fresh innovation is confined to our smaller stages.

Both of the straight plays are also fueled by star power. Two-time Oscar winner Glenda Jackson returns to New York theater after an absence of 30 years as the domineering matriarch in Edward Albee’s 1994 Pulitzer Prize winning Women while Chris Evans takes a perhaps permanent break from playing Captain America in the onscreen Marvel universe to limn a less-virtuous law enforcer in Kenneth Lonergan’s Lobby Hero. These marquee names provide the drawing power for their respective vehicles, but they are really part of a pair of tightly-knit ensembles.

The majestic Jackson is joined by the precise Laurie Metcalf and the intense Alison Pill in Joe Mantello’s reimagining of Albee’s examination of the life of a domineering woman not unlike his adoptive mother. In the first act, we are in the well-appointed bedroom of A, 92 years old and definitely not going gentle into that good night as she rails against the infirmities of her body and mind and reminisces on the challenges and joys of her long life. B, her middle-aged caregiver (Metcalf), and C, her young lawyer (Pill), spar over A’s foibles and attempt to sort through the debris of her unpaid bills. In the second act (there is no intermission in this staging), Miriam Buether’s elegant set transforms into a hall of mirrors and each actress becomes A at various ages. Mantello cleverly conveys this triangular vision without turning it into a gimmick. He also manages to inject action into what is basically a long debate peppered with Albee’s observations on the nature of mortality. Jackson is a fearsome lioness, roaring at the loss of her vitality. Metcalf and Pill are equally fearsome in defending their stances and marking their territory. It’s a triple tour de force.

Lobby Hero (2001) doesn’t address life and death like Three Tall Women, but its focus is almost as sweeping, considering issue of morality rather than mortality. Kenneth Lonergan’s intricately plotted Chinese puzzle box of a play asks when we should put the common good above our personal interests. Two security guards and two police officers are faced with a series of interconnected moral dilemmas. As he did in his compassionate screenplays for Manchester by the Sea and You Can Count on Me, Lonergan skillfully balances humor and pathos, endowing each point of this rectangle with flaws and virtues.

This first production by Second Stage at their new Broadway home, the refurbished Helen Hayes Theater, is cleanly staged by Trip Cullman on David Rockwell’s spare revolving set. But the four players are not equally strong. Chris Evans is appropriately and comically bellicose as the bullying cop Bill, but Michael Cera (of Arrested Development and Juno) fails to shade Jeff, the lovable loser security guard, often settling for easy laughs. Jeff is the center of the play and Cera does not provide a reason for us to care about his actions. Likewise Bel Powley as Dawn, Bill’s female partner and Jeff’s love interest, just delivers broad caricature. Brian Tyree Henry gives an in-depth portrayal of William, Jeff’s supervisor, and the most believable liming of a character’s conflict.

Despite Lobby Hero being a non-risky bet with its previous pedigree and movie-and-TV-star casting, it’s heartening to see a theater company committed to presenting American playwrights on Broadway. Meanwhile, down the block from the Hayes, the Disney Industrial Complex is presenting its latest potential cash cow, Frozen. Derived from the popular 2013 animated feature and the Hans Christian Anderson story “The Snow Queen,” this kiddie tuner hits all the proper notes—female power ballad (the Oscar-winning “Let It Go”), plucky heroine, briefly thwarted but ultimately resolved romance, comic anthropomorphized sidekick (a sweet snowman), lots of chases. But the conflict (repressed ice queen versus her warmhearted sister) provides little gripping action. Michael Grandage’s stiff staging, the syrupy book by Jennifer Lee (who also penned the original screenplay), and pleasant but familiar score by husband-and-wife team Kristen Anderson-Lopez and Robert Lopez are too by-the-numbers and left this non-Disney worshipping adult cold.

At the performance attended the young audience, particularly girls, oohed and ahhed after every ice storm projected onto Christopher Orem’s storyboard set. There will likely be enough of them dragging their parents in to keep the box office unfrozen and to provide plenty of jobs for capable leading ladies such as Caissie Levy and Patti Murin who turn in professional work as the obligatory princesses. Greg Hildreth is oddly muted as the cute snowman Olaf, perhaps because he was busy operating the puppet version of the character. Jelani Alladin makes for a refreshingly unconventional male love object and Kevin Del Aguila did get a smile out of me as a comic innkeeper. So far only Julie Taymor has managed to create a startlingly stageworthy vocabulary to tell a Disney story on Broadway with her dazzlingly original Lion King.

At Lincoln Center’s intimate Mitzi Newhouse space, Joshua Harmon’s Admissions takes an unflinching look at liberal assumptions about engineering diversity in education. Like Albee and Lonergan, this young playwright, who also wrote the barbed Bad Jews, combines razor-sharp humor with pointed commentary to produce a scathing satire of our racial politics. When the white, ultra-progressive admissions director of a New Hampshire prep school finds her own son the loser (because of the very policies she has been practicing) when he applies to an Ivy League college, she and her husband, the school’s headmaster, must question their values. Director Daniel Aukin wisely keeps the satire from becoming too broad as does his exemplary cast lead by Jessica Hecht as the conflicted mother. Once again, Off-Broadway is leading the way in presenting fresh, challenging work.