November 27, 2021: On the Friday after Thanksgiving, my husband and I were driving back from Philadelphia  after a visit to my mother. For some unknown reason, I got the urge to listen to Sondheim. We had not been listening to the radio news, so I didn’t know about his death. I punched his name into the Spotify search engine we heard “A Little Priest,” “Another Hundred People,” “The Ladies Who Lunch,” “The Miller’s Son,” “Hello, Little Girl,” and “Now You Know.” A loving and unexpected tribute to the greatest musical theater writer of the 20th century. Then we got home, I opened my computer and got the shocking news. 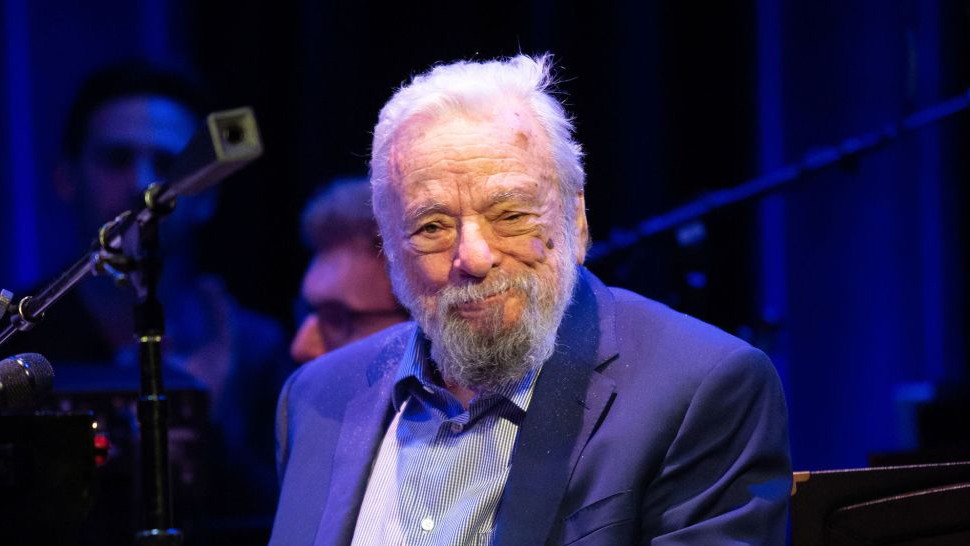 November 27, 2021: On the Friday after Thanksgiving, my husband and I were driving back from Philadelphia  after a visit to my mother. For some unknown reason, I got the urge to listen to Sondheim. We had not been listening to the radio news, so I didn’t know about his death. I punched his name into the Spotify search engine we heard “A Little Priest,” “Another Hundred People,” “The Ladies Who Lunch,” “The Miller’s Son,” “Hello, Little Girl,” and “Now You Know.” A loving and unexpected tribute to the greatest musical theater writer of the 20th century. Then we got home, I opened my computer and got the shocking news.

He was 91, so it wasn’t unexpected and he did go out on a high note. There are new productions of Assassins and Company playing as well as a new film version of West Side Story about to open. In addition, he was working on a new show, Square One, with David Ives. He recently revealed on Stephen Colbert’s talk show, it had just been workshopped with Nathan Lane and Bernadette Peters and he was hoping for it to open on Broadway next season. Let us all pray that comes to pass.

It’s almost a cliche to say he was a genius and that he changed the Broadway musical forever. His shows defined convention, going where few dared to travel. They almost never dealt with the standard boy-gets-girl formula which marked every major show from Oklahoma! to Guys and Dolls to My Fair Lady. No two of Sondheim’s musicals were alike. To quote a lyric of his, they “ran the gambit A to Z, three cheers and damnit, c’est la vie.” He took on a bachelor’s ambiguous relationship with love and friendship (Company), a bittersweet and devastating reunion of showgirls (Follies), an Ingmar Bergman sexual romance (A Little Night Music), Admiral Perry’s 19th century visit to Japan (Pacific Overtures), the creative process of impressionist artist Georges Seurat (Sunday in the Park with George), a mash-up of fairy tales (Into the Woods), the dark world of presidential murderers and would-be murderers (Assassins), and other oddities. He was accused of lacking warmth and melody. Nothing could be further from the truth (I’m still angry with Jerry Herman for hinting at the Tonys that Sunday in the Park With George wasn’t hummable.) His music was complex, rich and told the stories of his characters. His lyrics were intricate and beyond clever. I once tried to write a parody of “I’m Still Here” and only by picking apart the structure of the song did I discover what a masterpiece it is.

I met Sondheim only once and gave him a copy of my book It’s a Hit! which chronicled long-running Broadway shows and included entires on several of his works. He was gracious and sent me a letter thanking me. His shows will live forever. To celebrate his legacy, here is a catalogue of Sondheim shows I’ve seen and some thoughts on them:

West Side Story: non-Equity production at the Gallery Players; Glimmerglass production; Broadway revivals in 2009 and 2020 (the latter was Ivo Van Hove’s controversial, video-packed staging. I really liked it, some did not.)

A Funny Thing Happened on the Way to the Forum: College production at the University of Pittsburgh, Broadway revival with Nathan Lane.

Anyone Can Whistle: Encores with Donna Murphy, Raul Esparza.

Do I Hear a Waltz?, Evening Primrose: I’ve never actually seen either of these, but I have heard songs from the shows on Sondheim: A Tribute, an two-record LP album of a 1974 tribute concert I used to play constantly.

Company: rather good non-Equity production at the Heights Players; Roundabout revival with Boyd Gaines’ understudy, Veanne Cox as Amy, Debra Monk as Joanne; John Doyle’s revival with Raul Esparza. I will see the new production with Patti LuPone next week.

Pacific Overtures: the original Broadway production. I was in New York for a trip for high-school newspaper editors. I bought my own tickets while my fellow students stayed at the hotel. This was one of my first Broadway shows and it was breathtaking. Harold Prince’s inventive staging, Boris Aronson’ set, Florence Klotz’ costumes and Sondheim’s brilliant, intricate score. I still remember “Chrysanthemum Tea” (Alvin Ing as the Shogun’s Mother stole the scene), “Welcome to Kanagawa” and especially “Please, Hello” with each foreign admiral given his own musical style. The American was a John Philip Sousa march (which resrufaced in Assassins). The British sang Gilbert and Sullivan. The Russian did a folk tune. The French was a Follies Bergere pastiche. Also the Roundabout revival in 2004.

Sweeney Todd: I saw the original Broadway production when I was visiting NYC and applying for college at NYU (I didn’t get in). But seeing Hal Prince’s production of Sweeney was worth an entire four-year theater program. This is probably the best Broadway musical production I’ve ever seen. I didn’t realize the Beggar Woman’s true identity until I was supposed to and that factory whistle went off (No Spoilers.) Also saw John Doyle’s 2004 revival (both on Broadway and in London); Glimmerglass production; Off-Broadway production where the audience was seated in a bakery environment.

Merrily We Roll Along: Revivals at York Theater Company and Roundabout’s Laura Pels (from Fiasco).

Sunday in the Park with George: Original Broadway production, revivals in 2008 and 2017.

Into the Woods: Original Broadway production; revival in 2002; Off-Broadway at Central Park and Laura Pels (from Fiasco)–very clever production from Fiasco.

Assassins: Revivals in 2004 and 2021. The first one was delayed because of the terrorists attacks on 9-11. It was thought that would not be the right moment for a show about assassinations. The second got postponed because of COVID. Both times, the show proved more prescient and relevant because of the wait. The current production at CSC concludes with images of the Trumpist insurrection on the Capitol from Jan. 6, 2021. Several of the monologues and speeches of the dissatisfied and angry assailants sound like MAGA rants.

Revues: Marry Me a Little (Off-Broadway revival from the York Theater Company); Putting It Together (Off-Broadway with Julie Andrews and on with Carol Burnett); Sondheim on Sondheim with Barbara Cooke.

Getting Away With Murder: Straight play written with George Furth, very much like The Last of Sheila, the original screenplay he wrote with Anthony Perkins.

Film songs and Scores: Dick Tracy (Oscar for “Sooner or Later”), The Seven Per Cent Solution (“I Never Do Anything Twice”); Reds (“Goodbye for Now”).

So we will close with the song from Reds, an appropriate farewell since he will always be with us.

Originally Posted on The David Desk 2