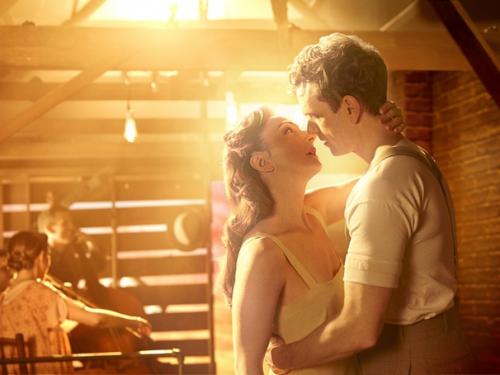 The surrounding story and songs by comedy legend-banjo plucker Steve Martin and Grammy winner Edie Brickell offer a few sparks and smiles but not much more. The sappy plot is reportedly based on a true incident but comes across as soap-opera fodder. There are two timelines. In 1920s North Carolina, brainy but poor Alice Murphy has a ill-starred romance with rich boy Jimmy Ray Dobbs resulting in a pregnancy but no marriage. Twenty years later, Alice, now a literary editor, encounters a promising young writer just back from Word War II. If you have an ounce of sense or ever read a book or seen a movie, you’ll predict how the two tales will finally merge half-way long before the final curtain. Director WalterBobbie and choreographer Josh Rhodes provide innovative flashes, Carmen Cusack makes an impressive Broadway debut as Alice, and a regiment of Main Stem veterans such as Dee Hoty, Stephen Bogardus, Jeff Blumenkrantz, Michael Mulheren, and William Youmans earn their paychecks, but Bright Star fails to shine.

Off-Broadway another country-themed show bursts into intermittent flames. Kenneth Lonergan, one of my favorite playwrights, takes a hard look at our entertainment-obsessed culture in Hold On to Me Darling at Atlantic Theater Company. Timothy Olyphant of TV’s Justified and Deadwood is hilariously self-centered and clueless as country-western superstar Strings McCrane who foolishly attempts to chuck his celebrity lifestyle to return to work in the feed store in his Tennessee hometown. While Bright Star drips with familiar homilies and nostalgia for honeysuckled mythos, Darling is a razor-sharp satire of American shallowness, directed with just the right combination of winking parody and hard-edged reality by Neil Pepe. Jenn Lyon delivers a slyly multi-layered turn as Nancy, Strings’ biggest fan and later his avaricious wife. She shifts so subtly from innocent admirer to emotional vampire you barely notice the change.

Two more Off-Broadway attractions feature similar miraculous performances from actresses, but in works of varying merit. Phylicia Rashad preservers through and finally conquers Head of Passes, Tarrell Alvin McCraney’s rather mawkish rewrite of the Book of Job at the Public while Marin Ireland dazzles as a wily Polish immigrant in Martyna Majok’s clever but slightly flawed Ironbound, a co-production of Rattlestick Playwrights Theatre and Women’s Project Theater. Head of Passes takes the familiar dysfunctional-family-reunion route in the first act and then veers into a tour de force monologue for Rashad in the second. She plays the domineering Shela, a religious matriarch whose faith is severely tested when her home and relationships are destroyed. Rashad raises above the familiar material and as does G.W. Mercier’s collapsing set. Majok’s Ironbound has a more inventive premise. At one grim New Jersey bus stop (Justin Townsend did the brilliantly drab set), Darja goes through 22 years and a repetitive series of dead-end jobs and romances. Loose ends are tied up a bit too neatly and a teen hustler character is extraneous, but like Rashad, Ireland wrestles her flawed play to the ground and beats it into submission. Her Darja is crafty, pragmatic, tough, tender, broken and indomitable all at once.

Danai Gurira deals with many of the same themes as Majok in Familiar at Playwrights Horizons—immigration, identity, the difficulty of sustaining relationships. The author, whose Eclipsed is currently a hit on Broadway, has a sure hand with dialogue and situation, but tends to tip a bit towards the sitcom and melodrama in this otherwise delightful comedy-drama about an Zimbabwean-American family coping with a stressful wedding and conflicts over their traditions and assimilation. Fortunately, director Rebecca Taichman and a solid cast including Ito Aghayere, Roslyn Ruff, Tamara Tunie, and Myra Lucretia Taylor keep the action moving at a rapid clip so that Gurira’s occasional lapses such as an absurd reaction to a family secret and, as in Ironbound, a too tidy conclusion, don’t impair the overall experience.

To wrap up this roundup, we return to the Public for Dry Powder, Sarah Burgess’s witty comedy of equity funds, leveraged takeovers, and economic imperialism. It’s funny and clever and Thomas Kail of Hamilton fame gives it a sleek staging, but Caryl Churchill covered this territory nearly 30 years ago in her Serious Money as did Jerry Sterner in Other People’s Money. The big revelation here is that financial managers are ruthless—surprise! The four-person cast does their best with the stilted yet well-spoken characters, but Claire Danes has a particularly tough time making Jenny, the empathy-impaired numbers whiz, more than a series of nasty quips. Unlike the previously-mentioned Off-Broadway productions, Dry Powder doesn’t rise above its limitations.