Can anything top live entertainment? The magic of the lights going down, candies beingunwrapped so as not to disturb patrons during the show, cell phones reluctantly being turned off [by some!]? Yes, it’s that wonderful timeof year and Santa knows the holidays are a perfect time to see a show. Broadway and Off Broadway tickets are among the most thoughtful gift for loved ones [along with wide-screen TVs, new cars, jewels]. There is an amazing range of plays and musicals from the long-run tried- and-true to the new season’s crop. 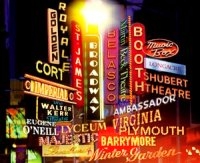 “Celebrating the holiday season with a Broadway show is the perfect gift to family, friends, and yourself!” says Charlotte St. Martin, executive director of the Broadway League. “Tickets are great stocking stuffers.”

For the full breakdown of Christmas and New Year’s week shows, visit www.broadway.org/performance-times/holiday. The site includes an associated mobile site and apps for iOS and Android. Playbill.com has also compiled a complete rundown of schedules.

“Broadway.org is a comprehensive resource for Broadway shows here and across North America, and now internationally – in eight languages!,” says Ms. St. Martin. “It’s the official one-stop destination for Broadway tickets and show information in eight languages, in addition to hotel and dining guides in Manhattan’s Theatre District.”

Wayne Brady, TV’s indefatigable Let’s Make a Deal host of many talents, has returned to Broadway and is behind Curtain #1 at the Hirschfeld in Kinky Boots, and having a riotous time.

These shows are in their final performances:

January 3: Dames at Sea, Hand to God, and Sylvia

And these are the final weeks to catch Matthew Morrison in Finding Neverland.

Must Have Cast Albums

There’s a New Racket in Town

This ticket resale business is ridiculous and it’s hard to imagine that the various theatre owners haven’t stepped in to stop it. Here’s the skinny: You find it all but impossible to get tickets to a hit show, even those that aren’t blockbusters, such as Hamilton, and they’re sold but you go on a site, say Ticketmaster, and you find “fan- to-fan certified” tickets that were bought by [assuming here] individuals and are available for resale at upwards of 200% of the ticket price. Since Ticketmaster already charges arms and legs in service fees, not to mention taking a nice cut of pie sales, it must be legal. But is there no end to greed? It would seem theatre owners would step in and stop this since it’s cutting into their sale of premium seats [that game started with Mel Brooks and The Producers and has gone wild since].