April 29, 2020: Theater and the performing arts continue despite the coronavirus pandemic. Stephen Sondheim’s 90th birthday was commemorated with Take Me to the World, a spectacular web-based quilt of performances presented by Broadway.com on April 26 and now available on YouTube. Though live performances on or Off-Broadway may not return for months, the annual award-dispensing free-for-all goes on, in different forms. 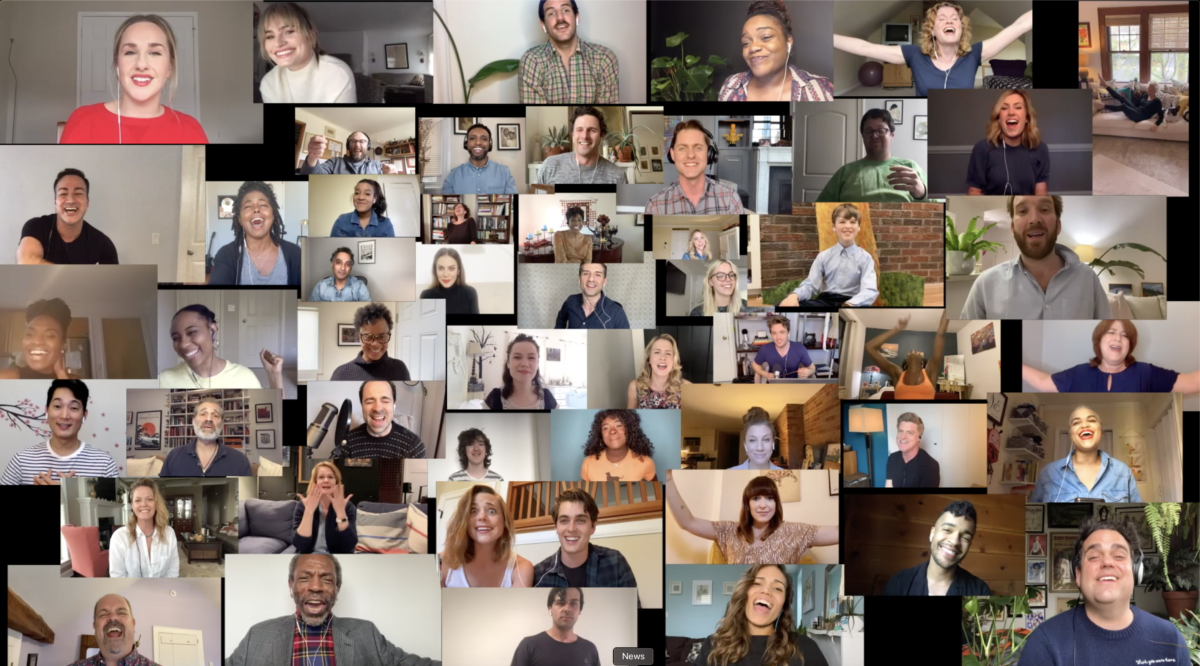 Performers in Take Me to the World: A Sondheim 90th Birthday Celebration Credit: Broadway.com

April 29, 2020: Theater and the performing arts continue despite the coronavirus pandemic. Stephen Sondheim’s 90th birthday was commemorated with Take Me to the World, a spectacular web-based quilt of performances presented by Broadway.com on April 26 and now available on YouTube. Though live performances on or Off-Broadway may not return for months, the annual award-dispensing free-for-all goes on, in different forms. The only prize-giving entity not heard from as of yet is the biggest of them all, the Tony Awards. This shows the fundamental difference between the Tonys and all other awards. While the Drama Desks, Outer Critics, Obies and Lortels are voted on by relatively small groups of Gotham-based critics and some industry insiders who will have seen all the eligible shows, a significant portion of the Tony electorate is made up of out-of-town road producers who come into New York at the end of the season to view as many candidates as possible. With no shows on, these people can’t vote for anything. (The rest of the Tony voters are NYC producers, the board members of the various theatrical unions and about 20 members of the New York Drama Critics Circle.) In addition, the Tonys are not only a ceremony to honor artistic excellence, they are also a commercial TV venture to push Broadway’s product. Again if there are no shows to push, CBS and the producers have no reason to put on a show, even a digital one with presenters and winners Zooming in.

The Broadway theaters are currently in limbo with no fixed date of reopening in sight. In the absence of a vaccine or treatment for the virus, NYC stages may not be back in the swing until 2021 or even later. That could mean, no Tony Awards for years. What happens to the Broadway shows that opened during this season before the big shutdown? They’ll have to be happy with a Drama Desk or Outer Critics Award.

There has been a plethora of announcements lately with final details on the awards which are going forward. The aforementioned New York Drama Critics Circle Awards will be presented on April 29 at 8PM on Stars in the House, the twice daily variety/talk web-based show hosted by Seth Rudetsky of XM Satellite Radio and his husband, producer James Wesley. The winners, voted by the Circle in a special Zoom meeting are Heroes of the Fourth Turning by Will Arbery (Best Play) and A Strange Loop by Michael R. Jackson (Best Musical). Special awards will go to David Bryne’s American Utopia, Deirdre O’Connell for career excellence including this season’s Dana H, and the New York theater community for perseverance in the face of loss during the COVID-19 pandemic. Adam Feldman of Time Out New York, president of the NYDCC, will host. Presenters will include John Mullaney, Michael Shannon, Brian Stokes Mitchell, Jeremy O. Harris, and Heidi Schreck. Richard Nelson’s new Apple Family play, What Do We Need to Talk About? will premiere the same night at 7:30 pm. But both events will be available online for later viewing.

The Drama Desk Awards which includes on and Off-Broadway announced their nominees on Stars in the House last week. The awards will be presented on NY-1’s On Stage show on May 31. The DDs last appeared on NY-1 ten years ago in 2010. After that broadcast, the ceremony was presented for one year on Ovation and then it was streamed via Theatermania until 2018. Last year, Broadway Brands took over producing the event which had been held at Town Hall. More details on the 2020 DDs are to come.

For many years, the Outer Critics Circle which includes reviewers for national and out-of-town outlets, was traditionally the first group of the season to present their nominations. But this year, the OCC board and nominating committee took a wait-and-see attitude before finally announcing they would scrap the usual nominees and winners routine and go for a more Obie-like approach. The group will honor up to five individuals or productions in its 26 categories. Before 1975, that’s how the DDs were presented with multiple citations and no winners or losers. The OCC list will be announced on May 11, the original date of the OCC dinner for this year.

In recent years, the Lortels, named for producer Lucille Lortel and for Off-Broadway only, have supplanted the OCCs as the first awards of the season. They have kept to that timetable and will be presented on May 3 in a digital ceremony hosted by Mario Cantone, available for viewing at www.lortelawards.org. The presenters include Nathan Lane, Jackie Hoffman, Andy Karl, Orfeh, Lin-Manuel Miranda, Kelli O’Hara, and Phoebe Waller-Bridge of Fleabag.

Columnist and beloved cultural icon Michael Musto announced the nominees for the Off-Broadway Alliance Awards on Facebook Live today. The awards will be presented in the fall as will the Theater World Awards. The Drama League converted its annual prizes for the best productions on and Off-Broadway into a ceremony expressing gratitude for theater workers of every kind. The Obies have announced they will be presented digitally, but a date has not yet been set.

A calendar of premieres of streaming theater/arts events and award dates follows. The Stratford Festival just announced it will be canceling its entire 2020 season. But we can watch archival performances on their YouTube channel.

April 29—What Do We Need To Talk About? (Public Theater/YouTube)

May 7—Antony and Cleopatra (NT at Home)

May 14—The Tempest (Stratford Festival/YouTube)

May 21—Timon of Athens (Stratford Festival/YouTube)

July 9—The Taming of the Shrew (Stratford Festival/YouTube)

Originally Posted on The Drama Desk 2