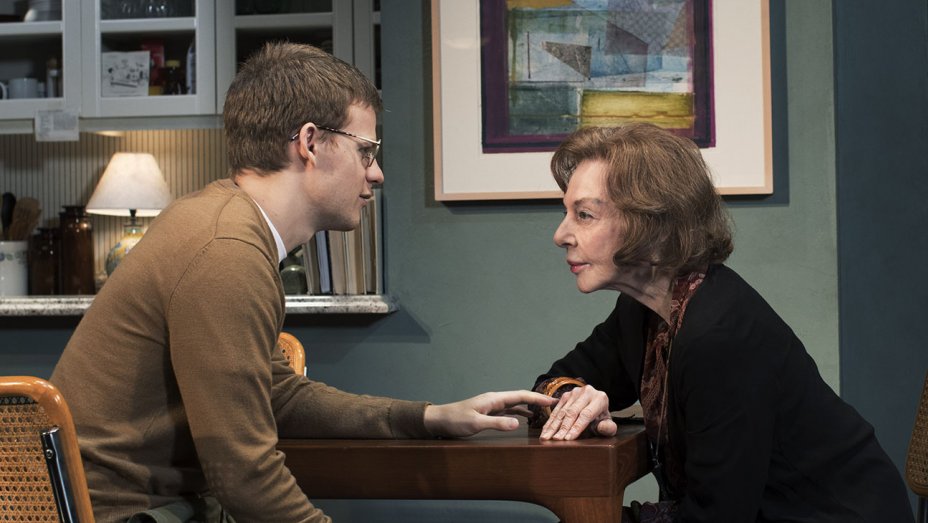 Lucas Hedges and Elaine May in “The Waverly Gallery”

Nevertheless, throughout the play, that’s exactly what Lonergan tells us and tells us and tells us. Fortunately, Lonergan does this in a way that is both poignant and funny. Even better, this revival, at the Golden Theater under Lila Neugebauer’s sensitive direction, has Elaine May (back on Broadway after over 50 years) portraying the aging Gladys.

Gladys is a former lawyer who it appears was once a force of nature. But she is no longer the woman she once was. Although in the first scene, Gladys shows her grandson, Daniel (Lucas Hedges), she has a great memory for everything and everyone in her distant past, she can’t remember much from one day to the next, like the fact that he’s a speech writer and not a newspaperman.

Gladys doesn’t have much to do other than while away the time at her Greenwich Village gallery; reminisce with Daniel, who lives next door; and visit her daughter Ellen (Joan Allen) and son-in-law Howard (David Cromer). Then one day while Gladys is in the gallery, an aspiring artist Don Bowman (Michael Cera) wanders in, and Gladys takes him under her wing, allowing him to sleep in the gallery and offering to mount a show of his work. Even Ellen and Howard help out, buying several of Don’s paintings.

Don doesn’t quite get what’s happening to his benefactor. A much more troubling problem for him is that he will lose his home and his place to show his work when the building owner shuts down the gallery. But watching Gladys deteriorate is not easy for her loving family. Some of the most deeply moving moments are those in which Gladys’s family unsuccessfully attempt to help: when Daniel tries to convince his grandmother everything is fine and she needs to go back to bed and stop waking him up in the wee hours of the morning, or when Ellen and Howard try to make plans for Gladys’s care.

None of this might sound particularly exciting to those who have not seen Elaine May onstage. Now 86, May no doubt knows something about aging. Comedian, writer and director, she certainly knows a great deal about theater. May painfully and perfectly captures the bewilderment and anxiety of no longer understanding what’s happening to the world you once knew. May’s Gladys is part clueless, part achingly aware her body and mind are failing her.

Hedges is particularly fine not only in his scenes with his family but also as the narrator who breaks the fourth wall to let the audience know he is now older and wiser.

Lonergan wrote “The Waverly Gallery” in 2000, and it’s hard to believe this memory play was not at least somewhat influenced by Tennessee Williams’s most famous memory play, “The Glass Menagerie.” Certainly Daniel is no Tom and Gladys is no Amanda.  Yet both plays are filled with youthful anxiety over the future and adult struggles with the past.

Gladys’s apartment, like her mind, is cluttered and disorderly, while Ellen and Howard’s is sleek and modern. It’s easy to imagine what their apartment may look like to Daniel and perhaps his son in a few decades.