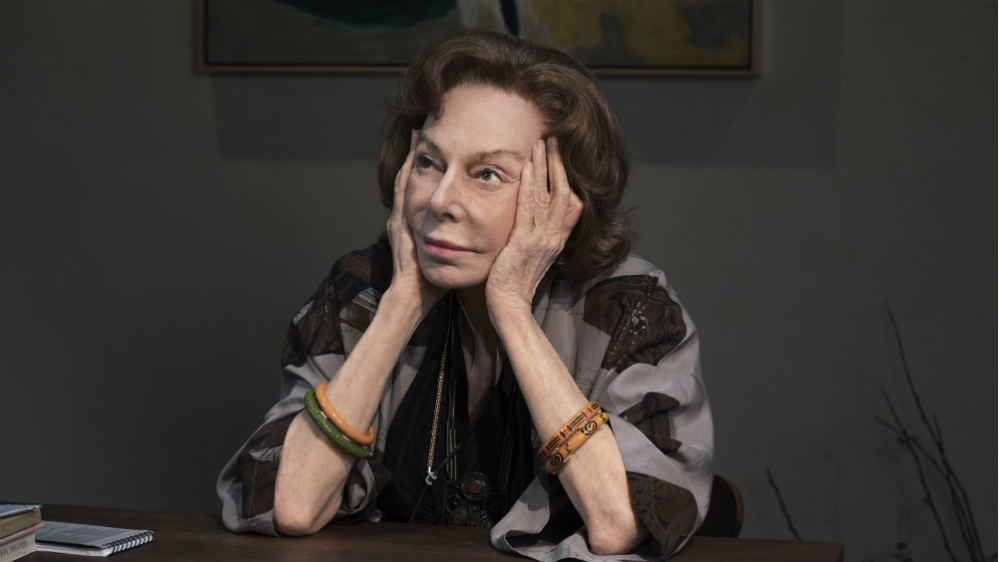 Elaine May in “The Waverly Gallery”

When Gallery premiered, it was seen as a vehicle for veteran character actress Eileen Heckart as the elderly Gladys Green, a once vital Manhattan art gallery owner sliding into senility as her family helplessly attempts to care for her. Heckart was hailed for her bravura depiction of a woman coming apart and won every acting award possible, expect the Tony since the play did not run on Broadway. The new production, deftly directed by Lila Neugebauer, also offers a memorable lead turn. This time, it’s the incomparable Elaine May at the Golden, the very theater where she performed her legendary comedy duo act with Mike Nichols in 1960.

May’s classic comic timing works perfectly for Gladys’ verbal ramblings and repetitions which drive her family nuts and send the audience into paroxysms of laughter. She also captures Gladys’ pitiful bewilderment at losing her mental balance. “What happened to me?,” she pitifully asks as her inner world crumbles. May, one of the greatest comediennes of her era, caps her career with an astonishingly simple portrait of human frailty. But this Gallery is also a heartbreaking ensemble piece.

Lucas Hedges is effective and understated as Daniel, Gladys’ grandson and the narrator of the piece. Along with Joan Allen and David Cromer as Ellen and Howard, Gladys’ frustrated daughter and son-in-law, Hedges brilliantly conveys the family’s love for Gladys and their inability to cope with her fading memory and identity. Allen is particularly touching as she displays Ellen’s strong love for her mother and growing desire to wring her neck. Allen’s performance is a combination of comic and dramatic limning equal to May’s. Michael Cera also provides subtle work as Don, the last of Gladys’ artists, who goes from innocent joy at having his paintings shown in New York to bitter disappointment at his lack of sales and the harsh realities of the city. David Zinn’s detailed sets and Brian MacDevitt’s rich lighting recreate the vanishing world of a middle-class, art-focused Greenwich Village. Tal Yarden’s period projections make this into a bittersweet reminder of Gotham’s past.

While Gallery depicts a situation that feels like real life, Apologia concerns itself with scenes that more likely take place on a stage. The template is a familiar one: a disconnected family reunites around a dinner table. A source of anger and tension is suppressed until copious amounts of alcohol lead to loosened tongues and explosive outbursts as the first act ends. Quieter confrontations, further revelations, and soul-searching occur after intermission with an ambiguous resolution for the final curtain.

The title is defined as a defense of one’s behavior and action, not an apology for same, and refers to the just-published memoir of the protagonist Kristin Miller (the brilliant Stockard Channing), an ex-patriate American art historian and radical feminist celebrating her birthday at her cottage in the English countryside. The source of tension is the omission of any mention in the book of her two sons, international banker Peter and psychologically damaged drifter Simon (both played by Hugh Dancy). Aside from ignoring her children in print, the main source of drama is Kristin’s ignoring of her offspring in life. Both sons confront her for neglecting them after their chauvinistic father took full custody and their mother devoted herself to her work. (The long-dead father gets off scot-free in the bad parent contest.)

The love interests of both brothers—simplistic but wise physiotherapist Trudi (Talene Monahon) and glamorous, shallow soap actress Claire (Megalyn Echikunwoke)—are in attendance. Providing comic relief is Kristin’s longtime gay friend Hugh (a brittlely funny John Tillinger) who is of course witty and sharply observant. The characters are too predictable and seem to come right out of Central Casting, with each representing a point of view or strata of society rather than emerging as credible human beings.

Campell’s wry script and Daniel Aukin’s tidy production offer many pleasures such as tight, well-paced staging and crackling dialogue on a variety of subjects including religion, politics, and art. Channing has an especially fascinating monologue on the Renaissance artist Giotto that combines history with passion. But there are too many loopholes and cliches. As soon as Claire announces the price of the expensive designer gown she’s wearing—to an informal weekend in the country?—and Trudi states she is switching from white wine to red, you just know a costly spill will soon follow. In another example of shameless telegraphing, the unbelievable mixing up of I-phones leads to an uncomfortable secret exposed to all.

Fortunately, the cast, led by a tough-as-nails Channing delivers the dramatic goods. She doesn’t stint on Kristin’s narcissistic rage, employing her formidable intelligence as a shield against emotional assault. The vulnerable core is there as well and when she peels away Kristin’s protective shell, it’s as heartbreaking as May’s final unravelling in Waverly Gallery. Dancy does an impressive double act as the seemingly confident Peter and the broken Simon. Bradley King’s atmospheric lighting and Dane Laffrey’s homey set create an attractive setting for this entertaining, but overly theatrical work.

Allen Licht’s My Parsifal Conductor also deals with a powerful, artistically-inclined woman evaluating her past, but does not go very deep into the complex issues it raises. The woman at the center of this “Wagnerian comedy” is Cosima Wagner (Claire Brownell), the widow of the composer Richard (Eddie Korbich). Like the protagonist of Amadeus, she relives her life in music in flashbacks on her deathbed and defends her sins to a panel of judging angels (the audience). Her chief offense is her anti-Semitic treatment of the Jewish Hermann Levi (Geoffrey Cantor), conductor of her spouse’s greatest opera Parsifal (hence the title). The subject is potentially gripping, but Licht, whose credits are chiefly TV movies, soap operas, and sitcoms, fails to significantly explore Wagner’s work, Cosima’s relationship to it or Levi’s, or the roots of European anti-Semitism. We never even learn why Parsifal is considered so magnificent and why—other than surface plot reasons—it was important that Levi interpret it. His contribution to Wagner’s legacy despite the composer’s anti-Jewish bigotry is also glossed over. Instead we get weary gags about confusing the word mezuzah with Methuselah, the philosopher Friedrich Nietszche (Logan James Hall) popping out from underneath Cosima’s bed, and King Ludwig II (Carlo Bosticco) emerging from his portrait on the wall. Director Robert Kalfin’s direction is too broad as are the performances, unlike the more shaded work on display in Waverly and Apologia.