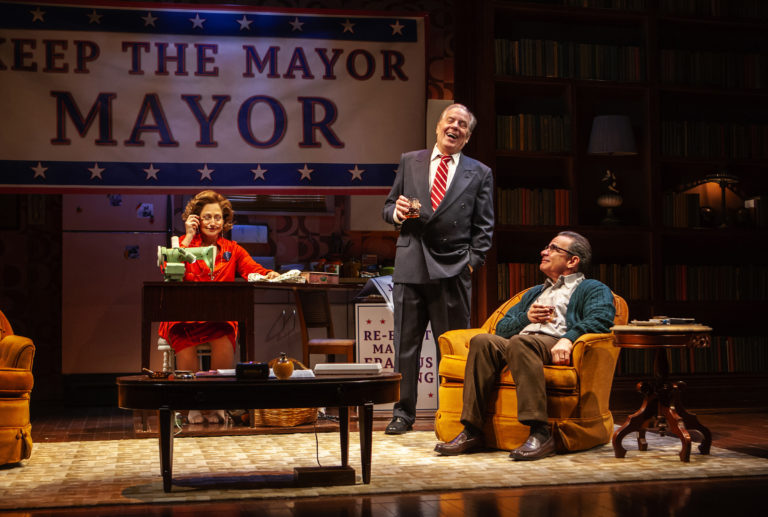 We are in set designer Derek McLane’s tasteful but subdued living room set in 1977 Albany. Three characters are watching television. Two men of late middle years are slumped in easy chairs sipping Scotch while a woman of the same age is working at a sewing machine up and center stage. Nothing happens for several seconds, finally there is some dialogue about it being late and everyone should go to bed. Exciting, huh? Only gradually do we discover that this ritual of boozing and chatting is shared by the Democratic mayor Erastus Corning, his good friend Peter Noonan and Peter’s wife, Polly Noonan—she is the focal point of the triangle and the play. The fact that Polly is played by the brilliantly intense Edie Falco is a great help to the evening, but despite a searing, quicksilver performance from the multiple Emmy winner and stage veteran, she cannot save the work from its lack of momentum and drive.

Polly is a political fixer, a behind-the-scenes manipulator with a finger in every pie and an opinion on every topic. Her old-fashioned, ward-heeler machinations have gotten the mayor elected multiple times and their relationship is rumored to be romantic, much to Peter’s chagrin. After some exposition has been laid out—Erastus faces a primary challenge from a young rival, plus the longtime local head of the party has died and his sought-after position is up for grabs—Erastus abruptly tells Polly he has to cut off their relationship. The central plot concerns Polly’s efforts to find out the reason for the break and her schemes to get back in the mayor’s good graces.

Along the way, White contrasts Polly’s outmoded local brand of favor-based electioneering with the incoming media-based methods of the mayor’s challenger (an appropriately slick Glenn Fitzgerald). There are also themes of sexism as Polly points out she is labelled pushy and domineering while men would behave the same way are seen as go-getters. In addition, we infer further parallels with contemporary politics as the seeds of Trump’s divisive efforts are seen in the conflicts Poly faces. But ultimately, there is not much at stake here, except for the burning question of will the mayor continue dropping by for coffee. The title is another head-scratcher. What exactly is the true? Is it Polly’s honest belief in her strong-arm methods leading to helping average people? Is it that all politics are dirty? Or maybe that relationships are all transactional? Ambiguity is fine, but White provides no strong argument for any of these positions, so the takeaway is a shoulder shrug.

There are isolated gripping scenes, mostly sparked by Falco’s unflinching portrait of Polly’s take-no-prisoners zeal. Watch the icy precision she employs while cutting down a promising recruit (Austin Cauldwell in a funny cameo) for daring to want to move beyond Albany. Scott Elliott turns in a proficient job of staging, getting the most bang for White’s limited buck.

Michael McKean, who supplied subtextual menace in revivals of The Little Foxes and The Homecoming, seems only tired here and fails to suggest the mayor’s former charisma. Peter Scolari subtly conveys Peter’s deeply buried anger at Polly’s insensitivity, erupting in tiny acts of passive aggression. As her chief nemesis, John Pankow has an arresting few minutes of bluster, proving a worthy opponent for Falco’s fire.

White has previously penned a potent mystery with another powerful female lead (Laurie Metcalf in The Other Place) and an uneven mix of Ibsen and O’Neill themes (The Snow Geese). Here, he has created a strong star part for one of finest actresses, but a weak vehicle to propel her.