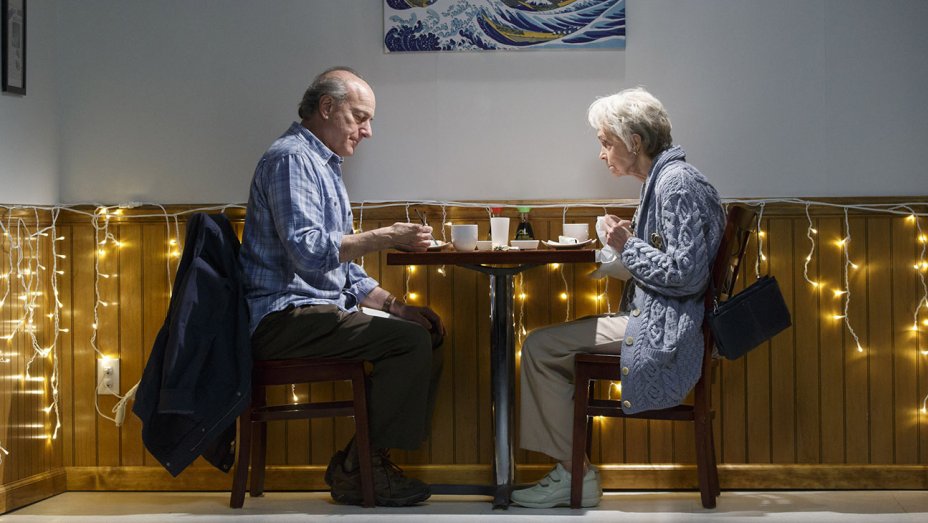 A story told primarily through cell phone conversations, Max Posner’s new play implores us to consider the use of the phone as dramatic device. In fact, these cells are so dramatic as to be unstoppable, a tried and true means to eradicating human connection. But that is just a detail, here.

While standing right next to each other, the siblings argue, over the phone, about their aging mother’s care. As portrayed by Deanna Dunagan, Ida Armstrong is an utterly narcissistic personality. Dunagan, who won the Tony Award for her role as an addicted, violently disruptive mother in August: Osage County, delivers a seamless performance here. One feels as though she disappears into the role.

Having left her children at a young age to marry a newspaper editor and local politician, Ida believes she is an icon of social prestige. And she spends money as if she were.

But it’s her decent into dementia, which Dunagan captures with incredible truthfulness, that brings the family situation to a head. And the person to whom they appoint the responsibility of Treasurer, is the one who already feels guilty at his inability to love his mother.

This character, who we know only as The Son, does not suffer these indignities with ease. Even though Peter Friedman plays the role in a very understated way, we know he’s virtually hemorrhaging with disquietude and anger. Much of this he vents while riding his bike, in bouts of pained inner monologue, directed to the audience, of course. Some of it is also quite humorous.

It is a weird and surprising production, imaginatively directed by David Cromer. The mirrors crack, the walls become increasingly unfinished (sets by Laura Jellinek), and the characters become more strange and estranged as the action continues.

Posner brings a mix of mysticism and quirky realism in the telling of a familiar family crisis that makes for a captivating evening of theater.