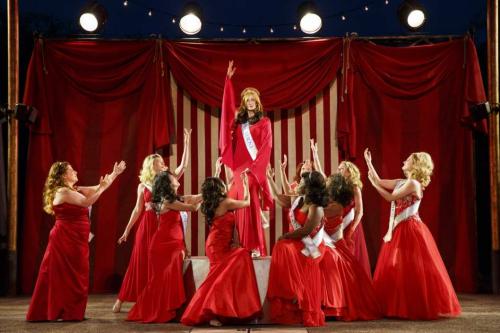 Most contemporary stagings sidestep the work’s essential misogyny and concentrate on the comic elements, but the current Shakespeare in the Park edition faces it head on in a radical interpretation featuring an all-female cast staged by a female director. The intentions may be honorable, but the results are mixed at best.

Stager Phyllida Lloyd shifts the action from 16th century Italy to a weird American circus where a beauty contest is taking place. The unseen emcee sounds suspiciously like a certain presidential candidate who ran the Miss USA pageant. The ironic concept of male objectification and oppression being portrayed by cross-dressing women is intriguing but feels imposed on the text as the beauty pageant scenes are tacked onto the rough-and-tumble courtship between the contentious leads. In another awkward sequence, Judy Gold who plays Gremio, one of the unsuccessful suitors of Kaherina’s sweeter sister Bianca, drops her Shakespearean character and launches into a contemporary stand-up routine decrying the advancement of women and longs for the good old days when tired businessmen would come home from work to a submissive wife and dinner on the table. Gold, a veteran comic, delivers the monologue with expert timing and gets her laughs, but it’s as if she and director Lloyd were hitting us over the head with a feminist cudgel. “See look how terrible these sexist pigs are,” they seem to be saying.

Despite the directorial overkill, Lloyd knows how to keep a show moving, with numerous cuts and no intermission, this is a rapid Shrew at only two breathless hours. Plus, there are performances to cheer. Janet McTeer is irresistibly infectious as a macho Petruchio, mocking the masculine posture by exaggerating his swagger but she does not make him a cardboard bully. Cush Jumbo’s Kate is spirited and fiery, but she fails to make sense of the heroine’s final conversion to domesticity or the frantic denouement imposed by Lloyd (no spoilers but the director choses to invert Shakespeare’s conclusion and tie in the beauty pageant theme which had been abandoned much earlier in the evening.)

Donna Lynne Champlin is a surprisingly vivid Hortensio and Gayle Rankin delivers a coquettishly ditzy Bianca. Mark Thompson’s appropriately garish sets and costumes reflect the carnival atmosphere. I confess I did love Petruchio’s massive RV smashing onto the Delacorte stage and steamrolling everything in its path. Too bad Lloyd did the same thing to the play.

Meanwhile, downtown, the Public Theatre presents another uneven production. Like Shrew, The Total Bent, the new rock musical from Stew and Heidi Rodewald of Passing Strange fame, starts out with a potentially strong premise. TV gospel singer-preacher Joe Roy vies with his gay son Marty, a talented songwriter-performer, over race and identity. As the Civil Rights movement rages, Marty seeks his own destiny away from his recreant dad, eventually becoming a rock star. Vondie Curtis-Hall and Ato Blankson-Wood give thrilling vocal and dramatic limning of the combatants and the score is sizzling. But the plot becomes repetitious and feels drawn out at less than two hours. 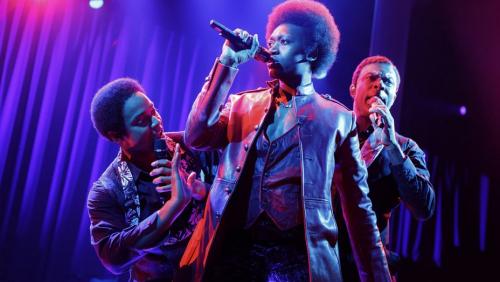 Himself and Nora, another Off-Broadway musical playing in the Greenwich Village area, is professional but shallow. This portrait of literary giant James Joyce and his strong-willed romantic partner Nora Barnacle—they lived together for 27 years and had two children before marrying—is a like a musical Wikipedia entry. All the facts are there, but author-composer Jonathan Brielle doesn’t probe very deeply into the creator of the greatest works of the 20th century or his primary relationship. The five-member cast is proficient and lively and director Michael Bush paces the proceedings smartly enough, but Brielle’s choices are conventional. Hardly fitting for the most unconventional of authors. While Shrew goes too far, the two Off-Broadway musicals don’t go far enough. 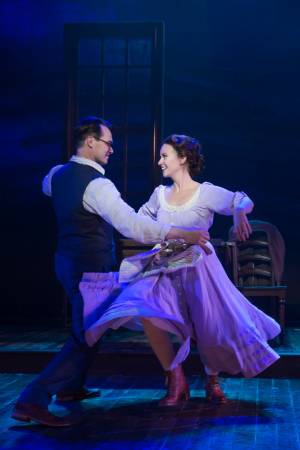