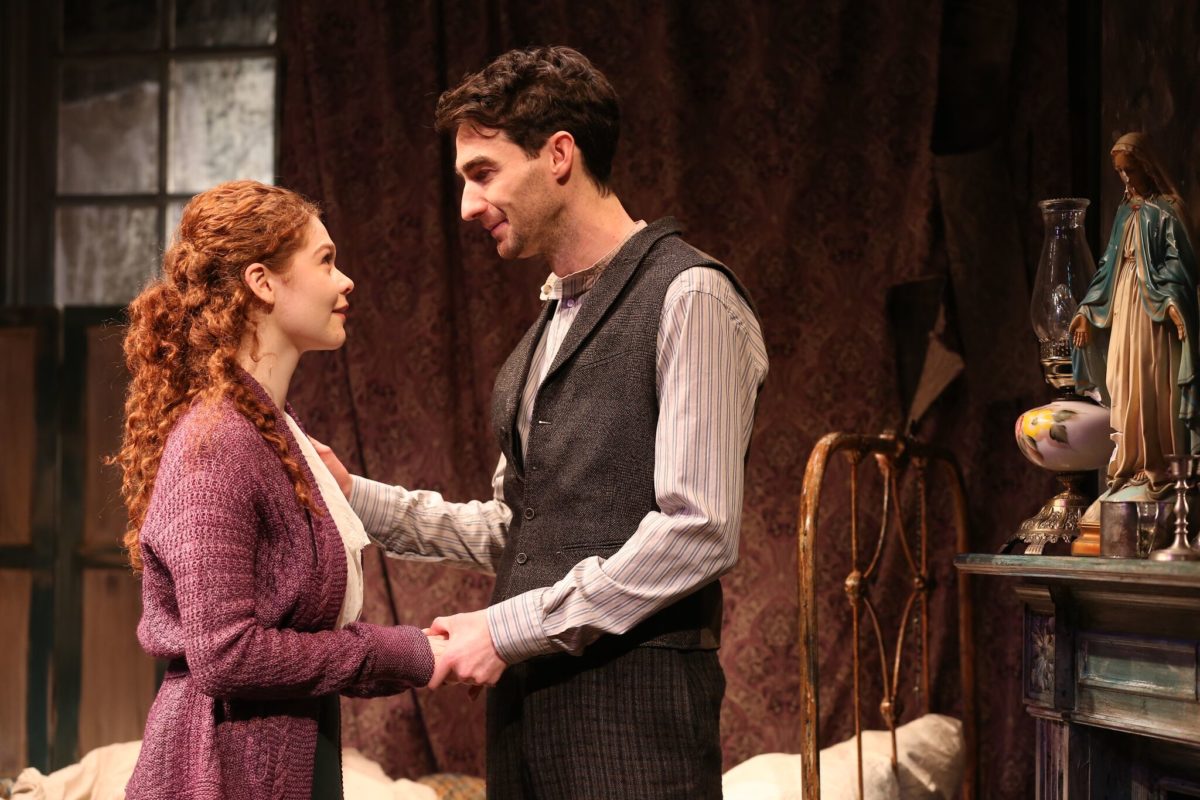 Each mirrors working-class Irish life during the bloody turmoil of those days a century ago when burgeoning nationalist currents created conflicts over whether or not to break free of British rule. The Shadow of a Gunman, which takes a negative position re: the fighting,is set in 1920, during the Irish War of Independence (1919-1921), while the others mentioned relate, respectively, to the Easter Rising of 1918 and the Irish Civil War.

The play’s program offers helpful historical background on all of this, and, while waiting in the lobby you can also watch a silent but titled documentary showing old clips of the historical events.

The Shadow of a Gunman is set entirely in a dingy, messy, and poorly heated Dublin tenement room, so realistically designed by Charlie Corcoran you may feel you’ve acquired chilblains while sitting in front of it. Outside, the Irish Republican Army (IRA) is warring with the British army on behalf of the newly formed Irish Republic.

The room’s shabby residents (grubbily dressed by Linda Fisher and David Toser) are Seamas Shields (Michael Mellamphy), a disheveled, lazy, boastful peddler, and his boarder, Donal Davoren (James Russell), a sensitive poet who tries to stay clear of politics and focus on typing his romantic poetry amidst the constant distractions surrounding him.

Through no fault of his own, a rumor has spread among the locals that the reclusive Donal is a “gunman” on the run, meaning an IRA assassin, which gives him the totally undeserved cachet of a heroic patriot. It’s an identity he sometimes dismisses but at other times allows others to believe when it strengthens his shaky ego. Recognizing the irony in his position, he closes Act One with a sly smile, saying, “And what danger can there be in being the shadow of a gunman?” Well might he ask.

A stream of interestingly unpolished visitors arrives at the flat, beginning with Mr. Maguire (Rory Duffy), an IRA volunteer and associate of Seamas’s, who leaves behind a leather bag and is later shot by the British. Then we meet the angry landlord, Mr. Mulligan (Harry Smith), who Seamas volubly (and in newspaper letters) defames, and to whom he refuses to pay his back rent. The landlord is followed by Minnie Powell (Meg Hennessy), a lovely, free-spirited, young lass enamored both of Donal’s literary aura and his imagined heroic purpose, which, when her own bravery comes into play, eventually dooms her.

There’s also Tommy Owen (Ed Malone), a hero-worshipping young man who yearns to be of service to the IRA. Mrs. Henderson (Úna Clancy) is a large, outspoken woman who wants Donal to turn over to the IRA for their assistance a letter of complaint written in comically verbose legalese by the elderly Mr. Gallagher (Robert Langdon Lloyd). And finally, we have the alcoholic Protestant Orangeman, Mr. Grigson (John Keating); and his simpering wife, Mrs. Grigson (Terry Donnelly).

Most of the slim plot is designed to express how these flamboyantly talkative and colorfully eccentric characters relate to someone they mistakenly assume to be other than he is, with some really good laughs erupting from a situation reminiscent of Gogol’s The Government Inspector.

The comedy of mistaken identity is roughly pushed aside as danger beckons and tragedy arrives when it’s learned that the ruthless British Auxiliaries (a.k.a. Black and Tans) are aware of Donal’s presence. And then there’s that leather bag, the consequences of whose discovery reveal just how much Donal is the shadow, not only of a gunman, but of a man.

Ciarán O’Reilly, the Irish Rep’s producing director, has done an extraordinarily fine job of bringing this material to stinging, tragicomic life, making moot conventional criticism of the play’s reputedly uneven blend of comedy and tragedy. Each member of the mostly (if not entirely) Irish and Irish-American ensemble gives O’Casey’s unusually vivid dialogue, spoken in thick Dublin brogues, the kind of dynamic force it requires while embodying their characters’ physical attributes with a perfect tone of heightened naturalism.

You almost feel you could as easily be watching the production at Dublin’s Abbey Theatre, where it was first produced (and who introduced it to New York in 1932), as on Chelsea’s W. 22nd Street.

You know O’Reilly takes his job seriously when exciting scenes of mayhem erupt late in the play, accompanied by sensational gunfire effects concocted by the redoubtable sound designers Ryan Rumery and M. Florian Staub, and lit with thrilling results by Michael Gottlieb, as panicked residents and resolute Auxies run in and out, including through the audience. The terrified behavior of the characters, especially Mrs. Grigson, and the frighteningly brutal conduct of the British officer (Harry Smith) toward the cowering Donal and Seamas are about as potently dramatic as anything you’ll see on any New York stage.

The brogues may now and then be a bit too thick to penetrate, and I’m tempted to nitpick about one casting choice (the actor, not his acting) because it seems out of line with O’Casey’s description. However, the hour and 45-minute production’s overall impact is so strong it would be almost ungrateful to make an issue of such things.

The Shadow of a Gunman shines brightly in its sordid setting. So, one hopes, will the two O’Casey plays yet to come.