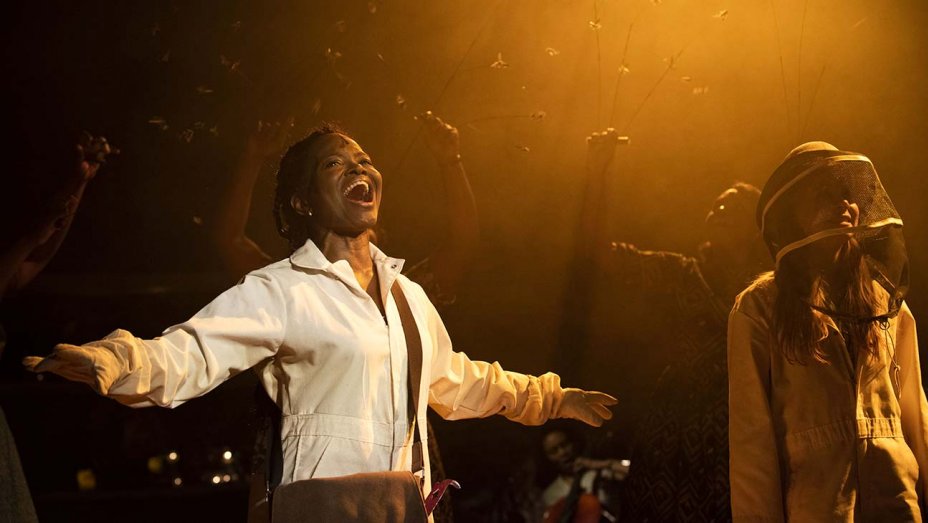 Like Spring Awakening, Duncan Sheik’s first musical theater piece which also premiered at the Atlantic Theater, this is a groundbreaking work. Musically, the influences stem from African American spirituals, the blues, and folk songs. Similarly, the narrative is nontraditional, and constructed in improvisational fashion.

The show opens on the entire troupe of actors that lead us into their story. With an on-stage orchestra performing a wide range of strings and brass, the spirit of song carries the tale.

Designed by Mimi Lien, the set is an open space that morphs through the performance from Lilly’s childhood home, into the street, a beekeeper’s home, a place for prayer, to a car, carrying the ongoing life of the characters. Simple activities from shucking peas, knitting, and praying to taking care of bees, tell us where the action is set.

Based on the novel by Sue Monk Kidd, also made into a popular film starring Dakota Fanning and Queen Latifah, the narrative is set against racial strife in South Carolina of the ‘60s. In fact, the precipitous event occurs early in Act I. Rosaleen, played with absolute determination by Saycon Sengbloh, gets violently beaten, while going to vote.

Rather than a reenactment of racial strife, the musical focuses on 14-year-old Lilly (Elizabeth Teeter), “white as a Lilly,” and her best friend, the family housekeeper Rosaleen. Together they escape the violence to which they are each subjected. Ultimately, their exodus leads them on the path to their own redemption.

In Lilly’s case, her abuser is her father, T-Ray, played by a wickedly convincing Manoel Felciano. Having guilted his daughter, now 14-years-old with the death of her mother, claiming that she killed her when she was just 4-years-old, Lilly lives under the shroud of his contempt and the neighbors’ gossip. With a handful of mementoes her mother left behind, including a postcard of a black madonna with the name of another small South Carolina town written on the back, Lilly leads herself and Rosaleen to the home of the Boatwright sisters. To their good fortune, the Boatwrights, the beekeepers, take them in, and eventually help Lilly understand what happened to her mother.

Building their bee business from the kitchen table, May (Anastasia Mccleskey), June (Elsa Davis), and August (LaChanze) express the virtues of education, commitment, and most importantly, sisterhood.  With her mellifluous voice, LaChanze sings, “Bee after bee beside his brother lifted by the wings of one another.” It’s a metaphor for their relationship.

Still, it’s the singing that lifts this production from its on-stage immediacy to the mythic. As Lilly, Tetter’s voice is earthy and personal, in a style that brings to mind Judy Collins.

Among the beekeepers, Elsa Davis as the school teacher who refuses the advances of her suitor, the school principal, turns from sourpuss to golden honey. As her persistent suitor – he proposes every other week – Nathanial Stampley, renders the role awkwardly and with sensitivity. Anastacia McCleskey as May resonates warmth and compassion.

Still, it’s the chorus of voices that is truly resounding.