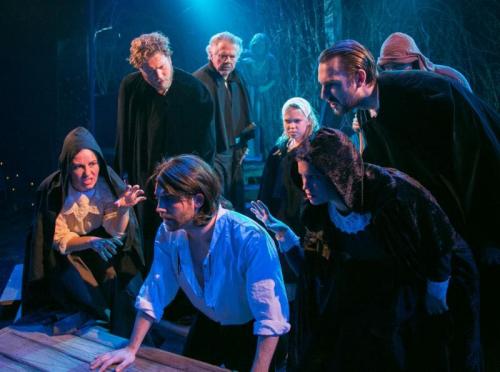 While the text in this original adaptation by Scott Eck and director Joe Minutillo of Nathaniel Hawthorne’s 1850 classic takes a lot of liberties,  the cast is wonderful, and the show crackles. The company is led by Chloe Dirksen as Hester Prynne, the woman who bears and wears the stigma of adultery. If Ms. Dirksen is not on all East End playwright’s short list of actors, she should be. Her performance had strength and nuance in the Friday night show I witnessed.

Set in the 1640s in the Puritanical Massachusetts Bay Colony, Hester has been sent there by her husband, who plans to join her later.
That doesn’t happen. He is believed lost at sea.  After two years, she gives birth, evidence of adultery. Hester doubles down on this crime by refusing to disclose whom the father is. She could be punished by stoning, or burnt alive at the stake.
Instead, Governor Bellingham, played by Daren Kelly, a very talented actor,
sentences her to jail, where she sews a scarlet letter A. She is brought out,
clutching her infant to the scarlet letter sewn over her breast, to stand on
the pillory for three hours, where her neighbors can taunt, heckle, and spit
upon her. All this can end, she is told, if she speaks the name of the father.
She refuses, and must, forever, wear the letter of shame.

Standing in the crowd of hecklers is a physically warped, ugly man. This man, she learns later, is her missing husband, now calling himself Roger Chillingworth, played by Nick Gregory, who plays the twisted man with relish. He seeks, not love, but revenge on the unknown father. Hester isn’t talking. He swears her to secrecy about his identity.

The man she is protecting is Reverend Arthur Dimmsdale. Michael Raver gives an intelligent, thoughtful performance. The reverend is popular with his flock. But, from that moment, he carries the scarlet letter in his heart, consumed by guilt.

We jump ahead seven years and meet the child, Pearl.
More than a sentence is needed to describe the performance of Dakota
Quackenbush. She is on stage much of the time. She stays on the good side of
precocity, and is seemingly at ease with her elders. She is surprisingly
seasoned for one so young.

There was one aspect of Hawthorne’s book that goes
unexplored here. Hester and Pearl live in a cottage at the edge of the
settlement in the original. They are outcasts. They survive and thrive because
of Hester’s skill with needlework. Pearl has no friends, except those in her
imagination. It would be theatrically strong to have a scene between the two,
alone in their cottage, after we make the jump in the story. Right now, things
are too easy for both in this adaptation.

If there are future productions, why not add two more
children to the cast? Now, Jessica Mortellaro and Carolann Di Pirro, both
wonderfully hateful as the Puritanical Goodwives, attack Pearl in the woods. In
the book, that attack is done by children flinging mud, much more powerful.

The part of Mistress Hibbins, the witch, played with
gusto by Kathleen Mary Carthy, is far more impactful here than in the book. I
guess it is to hook the targeted teenaged audience.

There is a wonderful ensemble feel here. Many of these actors have worked together before, and it shows.

As I said, this adaptation takes liberties, not all of
which pays off. I don’t recall a character named Blacksmith Forrester, well
played by Luke David Young, in the original. Even if there, do we need it on
the stage? Mr. Young also plays Reverend Wilson, a pivotal character in the
book who is on hiatus through most of this production. On the other hand, a lot
was added, such as a spoof on current politics.

This production is part of the Literature Live! series
at Bay Street, now in its eighth season. While not always faithful to the
original, 3.000 teens, bussed in on weekdays from all over Suffolk County, who
will have seen this production by the end of its run will have received a great
gift. So, too, will you, if you hurry down to Bay Street before it is gone
.
The Scarlet Letter plays through November 26 @ Bay Street Theater in Sag Harbor for tickets call or 631-725-9500 or Click Here 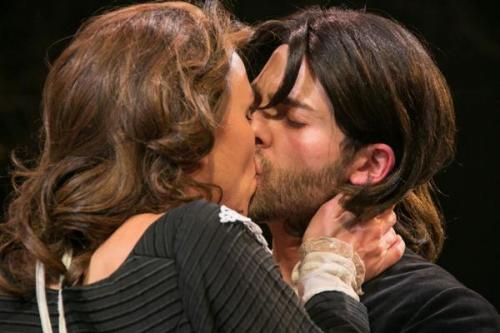