November 21, 2022: In 1918, when he was a mere stripling of 18, Noël Coward (1899-1973), budding British playwright/ performer/song writer, and so forth, wrote The Rat Trap,a four-act comedy-drama about marital dysfunction, with its accent on the drama. A reflection of Coward’s extreme precocity, it had a Shavian-influenced theme about the overlooked intellectual and artistic powers of the female sex, as told through a scathingly delineated marriage (see its title) between a fatuous playwright and his more gifted novelist wife. 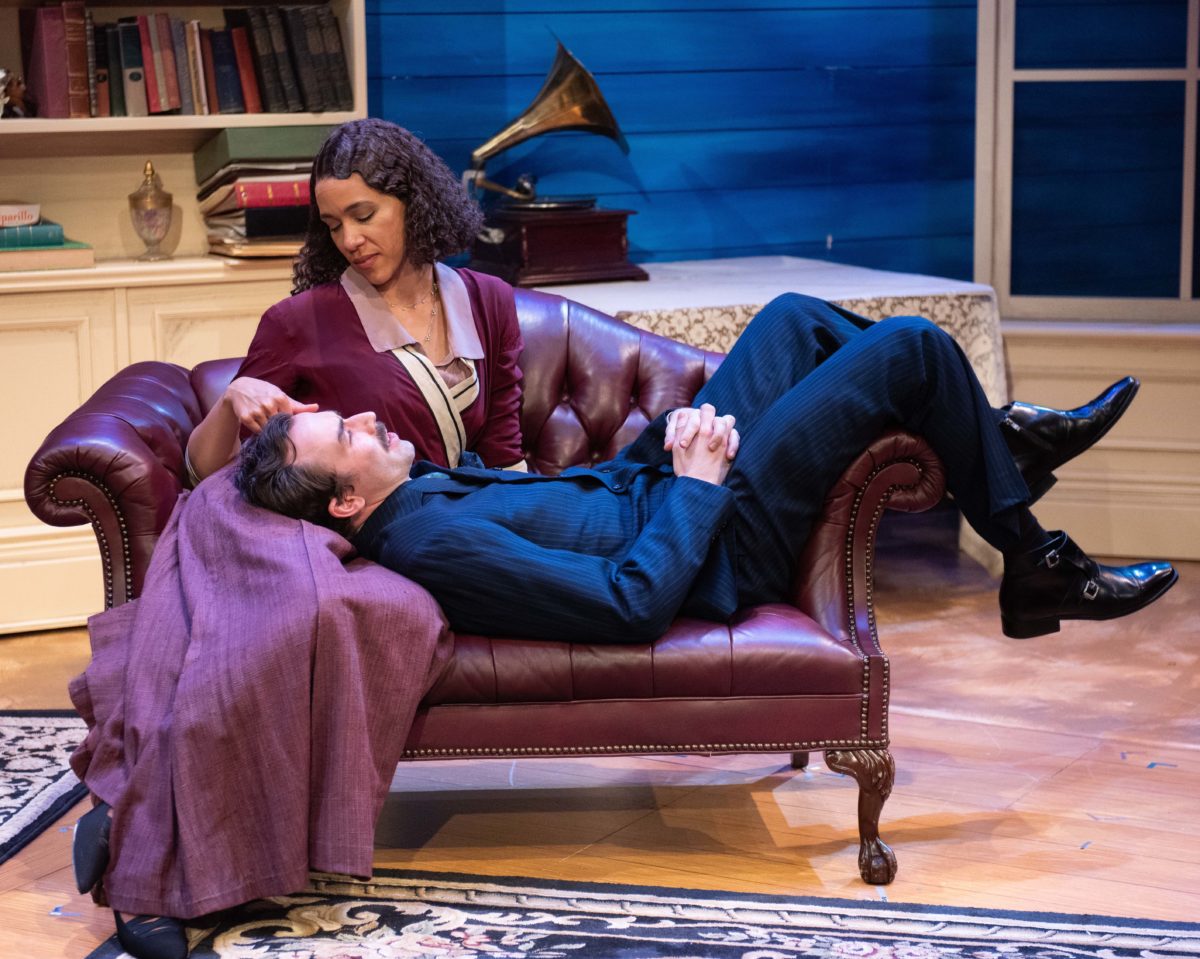 November 21, 2022: In 1918, when he was a mere stripling of 18, Noël Coward (1899-1973), budding British playwright/ performer/song writer, and so forth, wrote The Rat Trap,a four-act comedy-drama about marital dysfunction, with its accent on the drama. A reflection of Coward’s extreme precocity, it had a Shavian-influenced theme about the overlooked intellectual and artistic powers of the female sex, as told through a scathingly delineated marriage (see its title) between a fatuous playwright and his more gifted novelist wife.

The Rat Trap was published in 1924 in a volume with two other of Coward’s early plays, Fallen Angels and The Vortex, both of which soon had productions that helped launch his West End writing career. On the other hand, the 1926 premiere of The Rat Trap had only a two-week run in the equivalent of an Off-Broadway theatre in Hampstead. Coward, who wasn’t even there, paid it little mind, behavior that may have harmed the play’s reception. After being neglected for eight decades, however, London’s Finborough Theatre revived it to critical acclaim in 2012. And now, Off Broadway’s Mint Theater, dedicated to bringing back long-forgotten, often barely-known, plays, has brought The Rat Trap to the City Center’s Stage II in a version that, for all its intrinsic interest, falls short of acclimation.

Sheila Brandreth (Sarin Monae West) is a promising young writer living in a furnished London flat with an older woman named Olive Lloyd-Kennedy (Elisabeth Gray). Sheila is on the brink of marrying young playwright Keld Maxwell (James Evans), who is about to make his professional debut. The once-married Olive, a sophisticated, epigram-dropping gossip, tries to dissuade Sheila from marrying, warning that the nuptials of two writers can result only in a destructive clash of egos. Sheila insists that she and Keld are different, and that their love is great enough to prevent any such disruptions.

For formulaic contrast, Coward introduces another young writing couple, Naomi Frith-Bassington (Heloise Lowenthal) and Edmund Crowe (Ramzi Khalaf), unmarried, self-professed Bohemians, who live downstairs in sinful bliss. Thus we listen to the posh-accented quintet (several actors are English) discuss the pluses and minuses of married life, including the relative desirability of bearing children. The conversation, while commonplace today, has a distinct piquancy when one considers the time that it was written. And, as viewed in 2022, one may be forgiven for perceiving the friendship of Olive for Sheila through the subtextual lenses of LGBTQ-colored glasses.

Six months afterward—foreseeable in act one when Sheila and Keld were all over each other—the hammer and tongs have come out. Keld, in his rude treatment of the couple’s elderly Cockney maidservant, Burrage (Cynthia Mace), immediately reveals himself to be a pompous, arrogant prig. It’s therefore not surprising when, soon after, his behavior toward Sheila, especially when he’s unable to gracefully accept her critique of his writing, is absurdly insufferable. When you witness Keld’s narrowmindedness and hear that the couple has been “bickering” for some time, you may wonder at Sheila’s ability to stand it, no matter how desperate she is to remain cordial.

Making it worse is the overacting of Mr. Evans, who makes him obnoxious from square one, with nowhere to go except to become more obnoxious as the scene progresses. This is both the fault of Mr. Evans, as charmless as the crumpled manuscript pages he discards, and director Alexander Lass, who either encourages such excess overacting or thinks it’s perfectly acceptable. This is a shame, since the fight between Sheila and Keld, the play’s best scene, is written with great acuity as the dispute accelerates from words to physicality. For a sample of the stinging dialogue, here’s an edited chunk from Sheila:

“Don’t touch me, don’t come near me—not now. For once you’ve gone too far—I’m finished; it was all wrong, we should never have married, however much in love we were; I realise it now. Olive warned me and it’s come true; we’re like two rats in a trap, fighting, fighting, fighting. You need a commonplace, dull, domesticated wife with no brain and boundless open-mouthed appreciation for every mortal thing you do—someone who would hang on your words and convince you all the time of your own incredible brilliance. . . . With a larger mind you’d be a brute—but you’re too contemptible even for that.”

By the end of the play, Keld and Sheila have separated and she’s gone off to write in Cornwall. Conventional playwriting contrivances, including pregnancy and an affair with an ambitious flirt of an actress and former chorus girl named Ruby Raymond (Claire Saunders), have made their appearance. A frigid rapprochement, and one difficult to digest, brings things to a final curtain. Both as written and staged, it’s remarkably anticlimactic, closing the play with a whimper, not a bang. Wisely, Coward himself dismissed the final act in the preface to the play’s 1934 republication.

Much as the Mint deserves commendation for bringing to the New York stage overlooked nuggets from playwrights known and (to the average theatregoer) unknown, its productions cannot always be assayed as pure gold. The Rat Trap sometimes shines brightly, but too often the result is dross, largely because of the unmemorable performances. If Mr. Evans is excessively intolerable, Mr. Khalaf seems in the wrong play entirely, being too archly fey despite his wearing, inexplicably, a faddish, unappealing, and anachronistic five o’clock shadow looking more like a five-day one.

The women offer more satisfactory performances than the men, although none are exceptional. This is the more notable given that, in the extensive program note by Maya Cantu, much is made of the premature death in 1923 of the highly regarded young actress Meggie Albanesi, who allegedly had a powerful influence on Coward; the play’s first publication was dedicated to her memory, so Coward may have hoped for her to originate the role of Sheila. Sara Monae West plays Sheila with intelligence and strength, but it would be hard to say of her, as John Galsworthy did of Albanesi, that she has a “curious and unique faculty of emotional truth.”

Hunter Kaczorowski’s costumes look more 1918 than 1926, when dress lengths would have been higher, although they are effective enough; the men’s look less authentic, especially a suit worn by Edmund that makes him look more like a bellhop than a poet.

Unlike most Mint productions, the scenery (Vicki R. Davis), adequately lit by Christian DeAngelis, is less than impressive, probably because of technical problems with presenting three distinct locales. The stage, surrounded by the audience on three sides, shows the first act merely as an arrangement of furnishings before a billowing beige traveler curtain; the second and third as disparate pieces of furniture and bookcases before an oddly clashing upstage wall; and the final, a room in a wall-less Cornwall cottage placed in front of the now revealed background, an amateurishly painted scene of the seacoast. The complex scene changes are carried out by the actors moving things in dim light, which is excusable, but the shift from act one to act two, which is covered by having Naomi and Edmund do a music hall routine to a little-known Coward song, is a directorial distraction.

If you’re looking for the kind of snappily witty, airily stylish atmosphere of plays like Coward’s Private Lives or Blithe Spirit, you won’t find it here. Yet, for all its lack of superlative acting, its dull scenery, and its structural obviousness, the pulse of a coming dramatist beats loud and clear in several scenes. The promise shining through that second act spat alone is nearly enough to make a visit to The Rat Trap worth the effort.