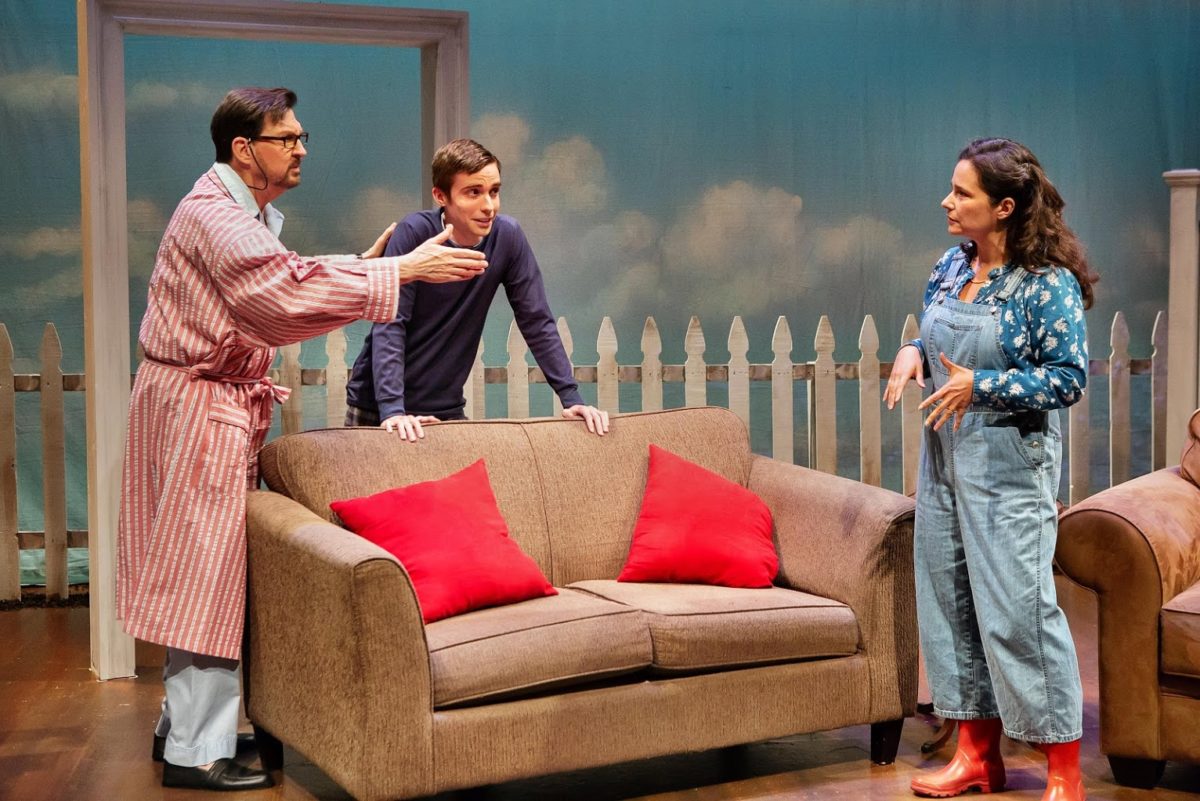 Eighty-five-year-old director Robert Kalfin, founder of the important Chelsea Theatre Center (1965-1984), long ensconced at the Brooklyn  Academy of Music, where I saw many of his productions, has been unable to bring a minute’s worth of believability or truth to the artificial, unappealing characters and dialogue in Josephson’s dysfunctional family play.

The same uncertainty affects Caitlynn Barrett’s interior/exterior set, which scatters wall-less windows, doors, and a roof frame about against a picket fence and blue-sky background to suggest the home of married couple Eddie and Irene and their teenage son, Todd. None of it makes much architectural sense and it takes time to figure out where characters are either going to or coming from. Paul Hudson’s lighting does little to vary the set’s appearance or the play’s moods.

Gail Cooper-Hecht’s costumes also involve several questionable choices; for starters, why is Irene almost always wearing cropped overalls and low wellingtons? Doesn’t she do anything other than garden? And why is the smart beige suit, orange shirt, and tie worn by a surprise visitor late in the play assumed to be the attire of a drug dealer? It looks nothing like what the script implies when saying “he is dressed like a parody of opulence, a caricature of good taste.”

The family around which the unfocused play—covering the years 2000-2002—revolves is headed by Eddie (Warren Kelley, mildly acceptable), an idealistic, argument-loving, capitalism-hating, bookstore owner, and Irene (Rachel Botchan, of the recently vanished Pearl Theatre, missing fire), a bank executive looking for new income sources to cover her expenses. These include college tuition for her druggy teen, Todd (Phil Gillen, charmless and too old), a rude, petulant slacker and would-be writer.

Todd’s biological dad, whom he despises, is Vernon (veteran Sam Tsoutsouvas, overacting to a fault), Irene’s former husband. Vernon is an obnoxious, bloviating, still randy 80-year-old. A retired business titan, the father of 11 kids via multiple spouses, he worships the power of money. The old goat has had barely anything to do with Todd since he was an infant but Irene wants him to give the feckless boy a summer job.

Finally, apart from the aforementioned surprise visitor (Matthew ZanFagna), there’s Greg (John Long, adequate), mid-40s, a depressed, underpaid, private school teacher with humanitarian leanings, to whom Irene rents a cottage on her property. Its initially affordable price, however, keeps rising as Irene, who at first has a yen for Greg, grows greedy in her desperate quest for security.

Much of the inflated palaver revolves around economic issues, moving up financially, and what it means to be an American, which leads sound designer Andy Evan Cohen to introduce various patriotic songs—like “Yankee Doodle Dandy”—into the scene breaks. Subjects like flag-waving patriots vs. angry protesters, are viable, of course, but their treatment here gets lost in the smog of dramatic folderol.

Apart from a few scenes involving several characters, Josephson finds feeble reasons for people to leave for extended periods so he can provide long-winded, two-character hot-air sessions, totally lacking in dramatic tension. Cardboard people pontificate in pseudo-intellectual, bookish sentences, barely bothering to use conjunctions; the lines are spoken by actors who often seem uncertain whether they’re in a drama or a comedy.

For an example of the stilted dialogue, which often sounds like it was written for a socially progressive melodrama in the 1920s, listen to Irene telling Greg to consider her not raising his rent as a contribution to the poor kids he teaches:

On their behalf, you can’t refuse it. I owe them something. Every single one of us who lives even modestly well owes something to the children in our midst who were born into despair. No, this isn’t for you, Greg; it isn’t personal. I am doing it to keep you on an even keel, so you can keep on tending to them.

Tennessee Williams once wrote a one-act whose title was “This Property Is Condemned.” Now why did I even think of that?