December 21, 2020: With Broadway shut down at least until June of 2021 due to the coronavirus pandemic, one must rely on streaming services and the occasional broadcast network special for a musical theater fix. The holiday season is usually rife with new shows and we have had to make due with filmed versions of Broadway hits such as Netflix’s The Prom. Directed by Ryan Murphy of Glee and American Horror Story fame, this adaptation of the 2018 tuner attempts to capture the snarky bite of Bob Martin and Chad Beguelin’s original book, but comes up short. Nevertheless, this is a fun, if overlong, romp for theater fans and might win over non-Broadway fanatics. 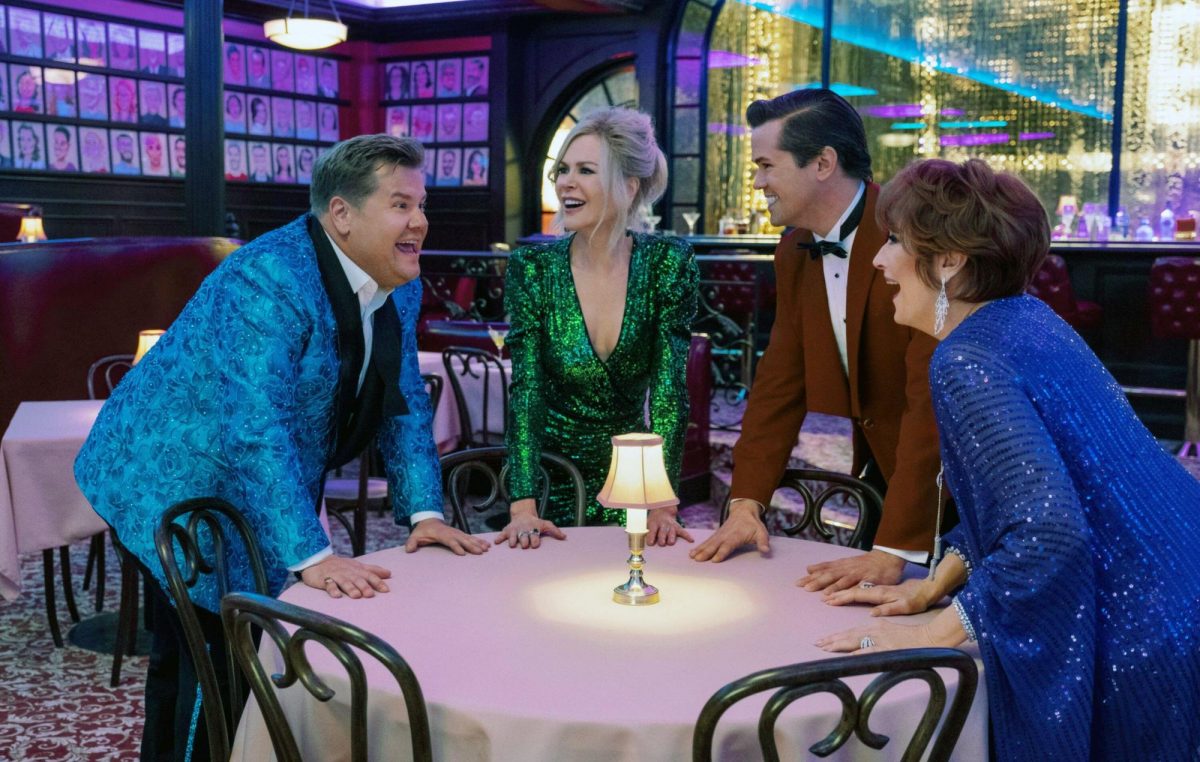 December 21, 2020: With Broadway shut down at least until June of 2021 due to the coronavirus pandemic, one must rely on streaming services and the occasional broadcast network special for a musical theater fix. The holiday season is usually rife with new shows and we have had to make due with filmed versions of Broadway hits such as Netflix’s The Prom. Directed by Ryan Murphy of Glee and American Horror Story fame, this adaptation of the 2018 tuner attempts to capture the snarky bite of Bob Martin and Chad Beguelin’s original book, but comes up short. Nevertheless, this is a fun, if overlong, romp for theater fans and might win over non-Broadway fanatics.

The storyline involves a group of narcissistic theater stars recovering from a flop musical about Eleanor Roosevelt. In order to redeem their flashy brands, they champion an Indiana lesbian teen in her quest to attend the titular high-school ritual with a female date. After several snappy musical numbers by Matthew Sklar (music) and Beguelin (lyrics), all learn valuable life lessons about tolerance and humility. The original production was a colorful, broadly played cartoon of theater conventions and political divisions, perfectly suited for the stage. (Despite winning the Drama Desk Award for Best Musical, The Prom picked up no Tonys, struggled to find its audience and ran for less than a year.) Exaggerated satire doesn’t play as well on the screen—small or big. So Murphy has dialed back the “oomph” factor and added more than a dollop of Afterschool Special sentimentality, including a tearjerking reunion scene between gay actor Barry Glickman (James Corden) and his formerly homophobic, but now repentant mother (Tracey Ullman). Murphy’s also overly fond of dim lighting, rapid smash-cut editing, and revolving the camera. During several of the musical numbers, I felt like screaming at my TV, “Stop spinning, you’re making me dizzy.”

While the film is in limited theatrical release and qualifies for Oscars, because of the pandemic, the majority will be seeing it on TV, a confining medium for larger-than-life characters such as lead diva Dee Dee Allen and out-and-proud Barry. Beth Leavel and Brooks Ashmanskas were splashy and unstoppable in the Broadway cast. Meryl Streep and Corden have had to tone down the glitz for the intimacies of the camera, and deliver softer, gentler, less vibrant portrayals. Fortunately, both get to display admirable musical-comedy chops as do Nicole Kidman as a surprisingly believable chorine and Andrew Rannells as a pretentious Juilliard grad. Jo Ellen Pellman has the right blend of pathos and panache as Emma, the outcast lesbian heroine, as does Ariana DeBose as Alyssa, her secret girlfriend. Kerry Washington brings reality and bite to Alyssa’s judgmental mom, the head of the puritanical PTA. But Murphy undercuts her honest liming by magically transforming the character into a super-supportive gay ally just in time for the happy ending.

This Prom-lite’s low-calorie vibe is best exemplified by the number “Zazz” in which stage vet Angie (Kidman) is giving shy gay teen Emma (Pellman) a lesson in showmanship. On stage, it was a shimmering show-stopper, but Murphy darkly lights the number as if we’re in a sleazy nightclub and adds so many cuts and revolving shots, it’s difficult to focus. This Prom is star-studded and sorta fun, but lacks the very “Zazz” it purports to push.

The Irish Repertory Theater’s hybrid stage-screen production of the holiday classic Meet Me in St. Louis is more modest in its aims and succeeds in its execution where The Prom disappoints. The beloved 1944 MGM film was previously presented on Broadway in an overblown 1989 stage version and then IRT scaled it down for a cozy, intimate Off-Broadway adaptation in 2006. IRT artistic director Charlotte Moore (who appeared as the mother in the Broadway edition) adapts and directs this pandemic version with the actors filmed in separate locations. The company has been a leader in offering streamed theater events during the health crisis with innovative, distanced productions of The Weir and Give Me Your Hand. St. Louis continues the success by effectively assembling the many scenes performed by the relatively large cast, along with a small, masked orchestra, into a cohesive whole. There are a few hiccups such as a bizarre kiss between the leads in different sites, but the essence of the heartwarming story shines through.

The film, derived from the stories of Sally Benson, was conceived as vehicle for Judy Garland and chronicles a year in the life of the Smith family (1903) as the world’s fair comes to their home town. Adolescent romance blossoms, tykes get into mischief and the family is heartbroken when the stern father informs them they are moving to New York (horrors!). The screenplay drips with nostalgia for a bygone era complete with white-picket fences and Sunday socials, yet this COVID edition feels appropriate for 2020. A racially diverse cast truly reflects a multiethnic America and the yearning for family and community is palpable during this time of crisis. As the Smith daughter Esther (the Garland role, beautifully reinterpreted by Shereen Ahmed) sings to her tearful sister Tootie (the delightfully impish Kylie Kuioka), “Through the years we all will be together/If the fates allow,” it’s abundantly clear that the actors are not together and we will all have to wait to be physically near each other.

Streaming Musicals’ new holiday offering Estella Scrooge goes even further into stage-video hybrid territory with truly dazzling special effects—Tyler Milliron is listed as director of photography and editor and Zach Wilson is credited with production art design. Subtitled “A Christmas Carol with a Twist,” this update on the immortal Christmas tale of a miser’s reclamation through the intercession of three spirits is a visual treat and chock-a-block with cuddly good intentions, but feels forced and phony. The book by John Caird and Paul Gordon, who also is responsible for the mixed bag of songs, not only updates the story but throws in every Dickens reference you could possibly imagine.

In this modern retelling, corporate shark Estella Scrooge is CEO of Bleak House (get it?), which is not only a subprime mortgage lender, but also a health insurance provider. This way Estella not only throws people out of their houses, but she kicks them off the medical rolls as well. On Christmas Eve, she travels in person to foreclose on a charity hotel run by her former love, the altruistic Pip Nickleby (two Dickens heroes in one—Pip from Great Expectations and the title hero from Nicholas Nickleby) and populated by a motel crew of lovable misfits, each named for a Dickens character from a different novel. Naturally, Estella is visited by a brace of ghosts, each with a specialty number, and she reforms on Christmas morning. But not before sharing lengthly, tedious duets with Pip between each spectral visit.

The cutsie-pie Dickens bits and the groan-worthy jokes are made bearable by a Broadway-caliber cast stuffed with Tony nominees. Betsy Wolfe conquers the cliches of Wall Street avarice for a multilayered Estella and Clifton Duncan pushes back tons of treacly dreck to create a believable Pip. Lauren Patten and Em Grosland are endearingly offbeat as a pair of hotel urchins. The reliably professional Carolee Carmello, Danny Burstein, and Patrick Page endow their ghostly roles with heft while Sarah Litzsinger is particularly captivating as a punk rock version of the Ghost of Christmas Past.

Caird, who also directs, transports us to a variety of magical settings via the imaginative visuals. You are left admiring the technical skills on display but grumbling “Humbug” for having to sit through a mawkish retread.