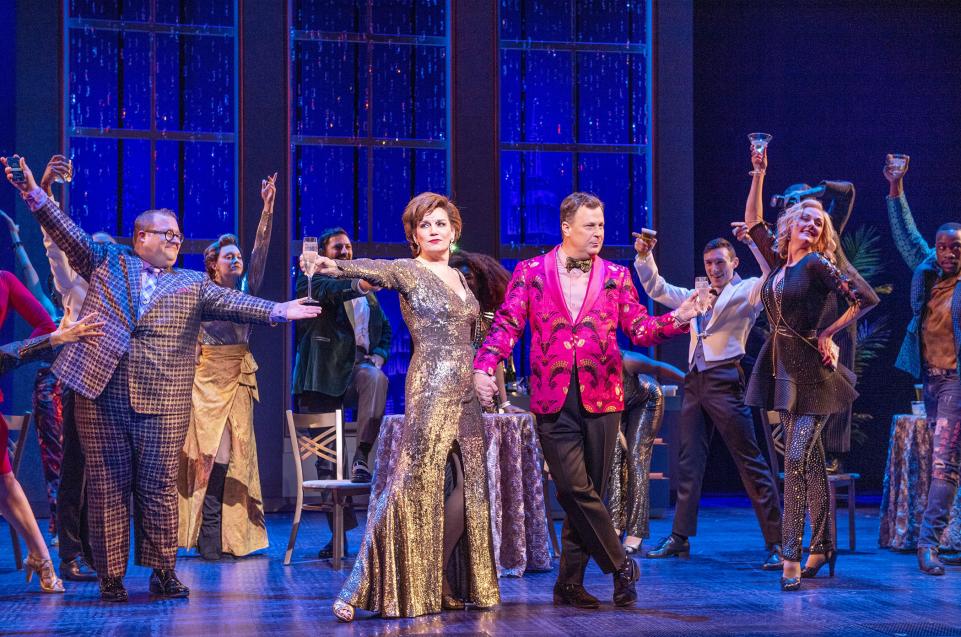 Seemingly as prepared as if she had been playing the role all along, Kate Marilley gave an amazing performance, shattering our expectations, regardless of what they might have been.  Fueled by a true sense of urgency, it was one of the most exciting performances I’ve ever seen.

After all, it’s a show with big name musical talent. Brooks Ashmanskas’ comedic skill is so endearing here. Capturing the clichés of a slightly aging gay man, with his effeminate gestures, grinning with joy, he is like an arrow to the heart. It’s he who bonds with the central character, Emma, a teenage lesbian played with a rich sweet, voice by Caitlin Kinnunen.

While it’s been a few years since Christopher Sieber was on Broadway, he makes a felicitous return, here. Sieber’s Trent Oliver, a pretentious sounding name for a pretentious sounding actor, is a grand poseur, who comes into his own in the song, “Love Thy Neighbor.” Joined by an ensemble of high school students representing a full rainbow of diversity, it’s one of the show’s highlights.

Even the smaller roles are character driven, with Michael Potts as the principled high school principal, Courtenay Collins as the onerous head of the PTA, and Angie Schworer as the musical comedy gal – a fully grown up version of the girl next door.

Written by Bob Martin of The Drowsy Chaperone fame, with Chad Beguelin, Prom is not as quirky. But it takes leaps at addressing social issues, in a fun-loving way. Social issues like individuality and inclusiveness “that liberal democrats from Broadway” necessarily embrace. What touches us here is the innocence and freshness of the story no matter how traditional it all clearly is.

With a consistent and even musical style Matthew Sklar’s songs are easy going Broadway tuners. Simple, clear lyrics by Chad Beguelin, along with the occasional forced rhyme, sustain the energy in this fast-paced, run amok comedy.  And Casey Nicholaw’s choreography makes us feel like it’s something we can do, too, except when the kids are on the stage. They outshine with moves no one else can do.

Scott Pask’s scenery is basic, like everything else in high school. And Ann Roth and Matthew Pachtman bring years of Broadway credits to the wardrobe. With a bright red wrap around dress for our leading lady, a shirt adorned with butterflies for Ashmanksas’, and plaid flannel shirts for Emma. The patchwork of wardrobe alone tells the story.

But the charm of this musical lies in its whacky characters, the diversity of its actors, and the feel-good story which ends with two girls kissing lovingly on stage, and the promise of a biracial marriage.