“You can do anything as long as you win.” That’s not a quote from the playbook of Donald Trump, but a line from Arthur Miller’s drama The Price, now in a Roundabout Theatre Company revival at the American Airlines Theatre. 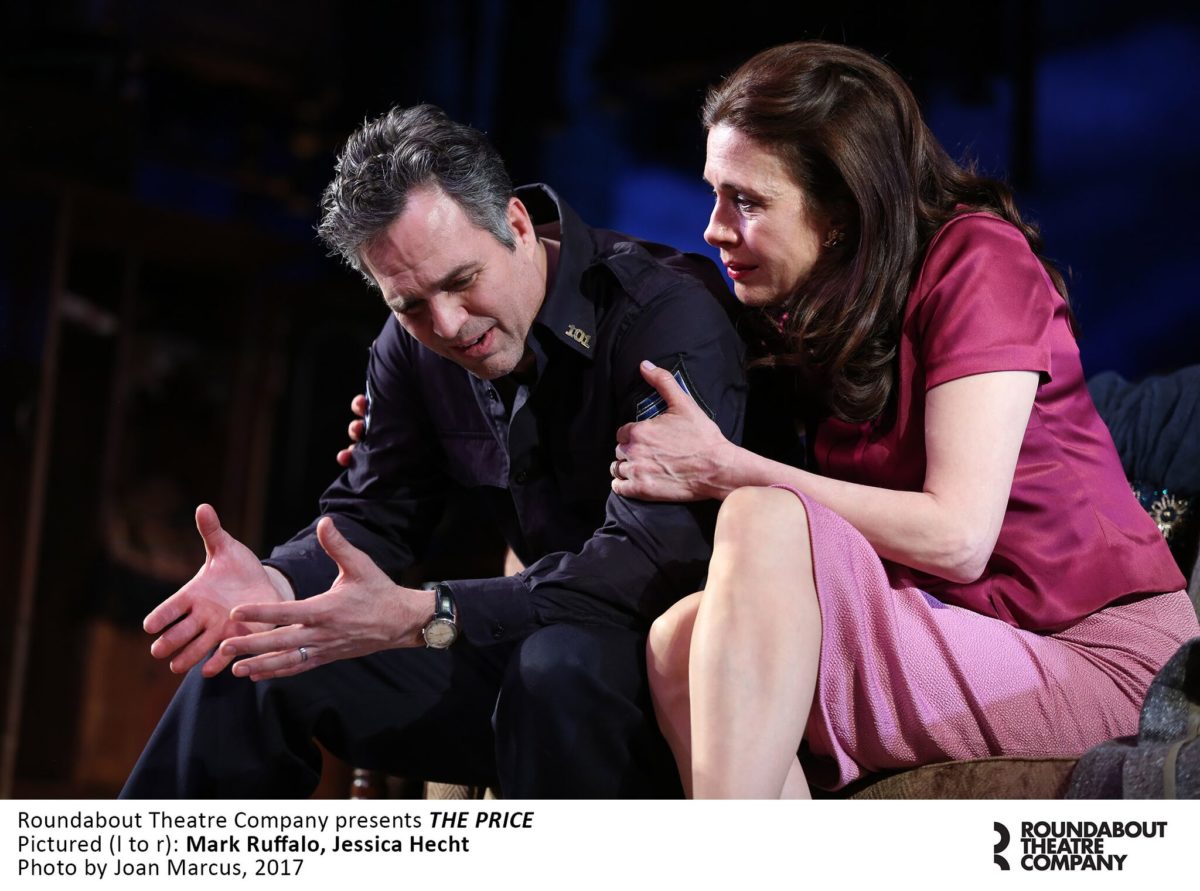 “You can do anything as long as you win.” That’s not a quote from the playbook of Donald Trump, but a line from Arthur Miller’s drama The Price, now in a Roundabout Theatre Company revival at the American Airlines Theatre. When the play first opened on Broadway in 1968, Miller was critiquing what was then called the “rat race”—the gigantic hamster wheel most Americans were running on in order to pile up money and material goods to impress the neighbors and inflate their self worth. In a furniture-stuffed attic (Derek McLane designed the evocative set), two brothers at opposite ends of the economic spectrum clash over their family’s Depression-era ruin and its aftermath as their boyhood home is about to be torn down and its contents must be sold. The title refers not only to the price of the clan’s furniture but also to the human cost of sacrifice and success. Judged as too heady and talky by audiences and critics, the original run was seen as a disappointment from the author of the classic Death of a Salesman.

Since then, the play has seen numerous productions (this is the fourth Main Stem production). While it is still not as well-regarded as Salesman, Price’s market value has risen. It’s seen as startlingly relevant for its prescient vision of a nation driven by materialism and the “making-a-deal-at-all-costs” mentality. (One wonders what Miller would have made of our amoral CEO president.) There are still problems with the script. The first act can very easily be taken over the flashy Gregory Solomon, a wily, octogenarian Russian-Jewish appraiser, full of jokes and observations. Solomon is absent for much of the second act when the action mostly consists of retelling past events rather than showing current conflict. Director Terry Kinney and a stellar quartet of actors have not quite overcome these deficiencies—that second act feels particularly long—but they infuse the proceedings with humor and humanity. Danny DeVito of Taxi fame makes a glorious Broadway debut as the elderly sparkplug Solomon, dispensing wisdom and wisecracks as he munches on hard-boiled eggs and Hershey bars. His comic timing is impeccable as is his insight into this canny survivor. I suspect Mark Ruffalo was battling a cold at the performance attended since he sounded congested, but he managed to work it into his character, the beleaguered brother Victor who gave up a promising scientific career in order to support his crushed father. Ruffalo’s world-weary cop seems to carry the weight of 30 years on his shoulders with every anguished move and the actor’s ailments added to their weight. He also captures Victor’s need for redemption and honor, even in the battle over the furniture.

Tony Shalhoub conveys the guilt and grandiosity of Walter, Victor’s more successful surgeon brother. But he pushes Walter’s narcissism too much, turning him into a monster of selfishness rather than Miller’s more shaded individual. The luminous Jessica Hecht is largely confined to the sidelines as Victor’s long-suffering wife Esther, but she makes watching and supporting an active action. Despite a talk-heavy second act, this is a Price worth paying. While The Price is an old stock with much value, the prospectus for the new rock musical Joan of Arc: Into the Fire, which opened on the same week at the Public, was more promising than the final product. The creative personnel are impressive. The Talking Heads’ David Bryne and Tony-nominated director Alex Timbers had collaborated on the ingenious and immersive Here Lies Love also at the Public. But their take on the Maid of Orleans lacks—you’ll pardon the expression—fire. There are some innovative and relevant touches. The pre-show curtain contains Senator Mitch McConnell’s admonishment to Elizabeth Warren: “Nevertheless she persisted,” and the cross-dressing Joan is often referred to as transgender. Timbers does have several clever pieces of staging such as having his all-male chorus dressed in Clint Ramos’ rough cloaks with British and French flags on either side so they can play both factions in a stirring battle scene. But the score feels derivative of many other rock operas, especially Lloyd Webber’s Jesus Christ Superstar—there’s even a similar inquisition scene with a campy authority figure mocking the martyred and dirtied protagonist. The show aspires to be Hamilton-like, transforming Joan into an outsider rock star, but the parallels don’t quite work. Making the French rebels into a boy band with mike stands as their weapons lacks the heft of Lin-Manuel Miranda’s hip-hop energy.

Jo Lampert as a punk-goth Joan works very hard and displays stirring rock vocals but she  fails to incite much passion. Ironically, the only moments that evoke real emotion are provided by Mare Winningham who appears as Joan’s mother for a few minutes at the musical’s end. Her heartfelt pleas to erase the stain of sin from her daughter’s soul to a council of clerics are genuinely touching in an otherwise synthetic evening.