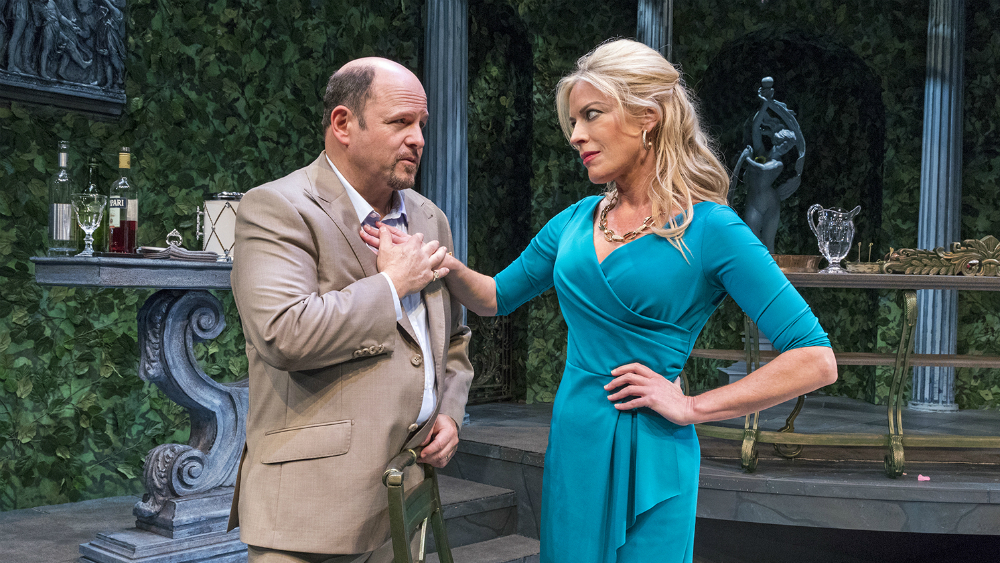 The comedy, which Shanley also directs for the Manhattan Theatre Club, has only the most rudimentary of plots. Drama queen, and newly widowed Atalanta (Sherie Rene Scott) wants her attorney and friend since childhood, Barry Dragonetti (Jason Alexander) to settle her late husband’s affairs, sell her house (at a below standard commission) and become her new lover. But Barry has a too young wife, Patty (Aimee Carrero), and Atalanta has a too young lover, Patty’s former boyfriend Freddie Imbrossi (Pico Alexander). This is a plot that lacks both believability and depth.

What’s more, the play overuses ethnic stereotypes – Greek, Italian, Puerto Rican. Some of the jokes are stale or don’t quite land. And the ending in this comedy of mismatched lovers has a Shakespearean predictabilty.

But happily Scott and Alexander turn every rough diamond into a polished gem. Add to this the considerable talents of Mary Testa, who plays Dragonetti’s sour-spirited and sharp-tongued mother, and the hilarious complications generated through the callow Freddie and the feckless Patty, and you have one helluva funny play.

Perhaps the virtue of this cast is that they seem to viscerally understand the ridiculous nature of the material. Testa is more than the mother-in-law from hell; she’s the devil come to earth as a mother-in-law. Jason Alexander is not just a lousy lawyer and a timid husband; he’s a coward who blusters and cringes when reminded of the Portuguese kid who attacked him with a can opener many years ago. Pico Alexander is part poet, part gigolo.

Some may wonder about or fault Shanley’s decision to direct his own play, but the reality is he doesn’t do a bad job. And with such a talented cast, it’s hard to go wrong. Plus, he has an excellent design team in John Lee Beatty (set) and William Ivey Long (costumes), who make the show a pleasure to the eye.

So maybe The Portuguese Kid isn’t Doubt. Maybe it’s not even Moonstruck. But it does provide a few much needed laughs during these difficult and frustrating times.