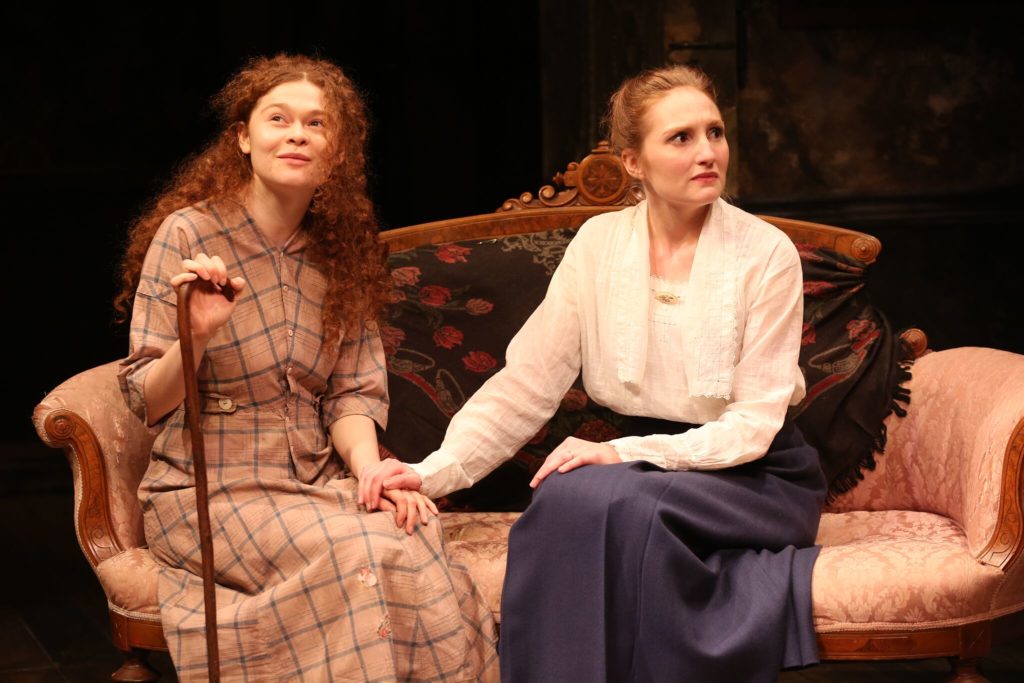 Take the way Nora, (Clare O’Malley) fights with Jack (Adam Petherbridge), about attending the Citizen Army meeting. It’s a small version of the war that is beginning, the Easter Rising of 1916, which fueled an ongoing rebellion between Ireland and England.

Director Charlotte Moore mines the colorfulness of O’Casey’s characters, and their behaviors exposing the vulnerability of the urban poor. There’s Nora’s Uncle Peter (Robert Langdon Lloyd), a sentimental and unsympathetic character who glories at posing in his old army uniforms. Later, he squeals at the sight of guns, hides at the thought of endangering his life, and generally acts like a baby in a play where one character dies in childbirth, and another loses her baby in still birth.

There’s  the conservative, high-pitched Mrs. Gogan (Una Clancy) whose daughter, Mollser (Meg Hennessy) suffers from consumption. While she struggles to earn every dime Moser is left alone. James Russell plays The Covey, the socialist, an aloof  sort of observer, who spouts theory. Still, under the duress of war, he becomes a practical minded thief.

In the role of Bessie Burgess, the crazy drunk lady, Maryann Plunkett transforms from the coarsest of neighbors, to the most giving and charitable character in the play. It’s an extraordinarily vivid and truthful portrayal of a character who discovers in herself a deep sense of charity, even sacrificing her life.

And at the core of it, the two central characters, Jack and Nora who prove sadly that love cannot defeat war. To that end, the Nora we first meet appears clawing, clinging to a middle class dream of domestic contentment. While Jack appears at first so innocently fetching. In these roles, O’Malley and Petherbridge reveal the contrasting and irreconcilable differences at the heart of the play. O’Malley especially brings a lot of sensitivity to Nora’s plight. With the most to gain, their losses are the most maddening.

Fighting the battle of the Irish poor and the dream of independence with his pen, O’Casey demonstrates a surprisingly modern sensibility. As we see it here with actors in period garb, speaking with Irish accents, and with heightened behavior, they look odd. The war they’re so engrossed in inexplicable. It’s the mirror O’Casey holds up to the senseless nature of war that sings to us here.

And the conflict at the heart of it, the plough that represents the labor of tilling the soil, and the stars that represent the dream. Shall we conclude that “never the twain shall meet”?