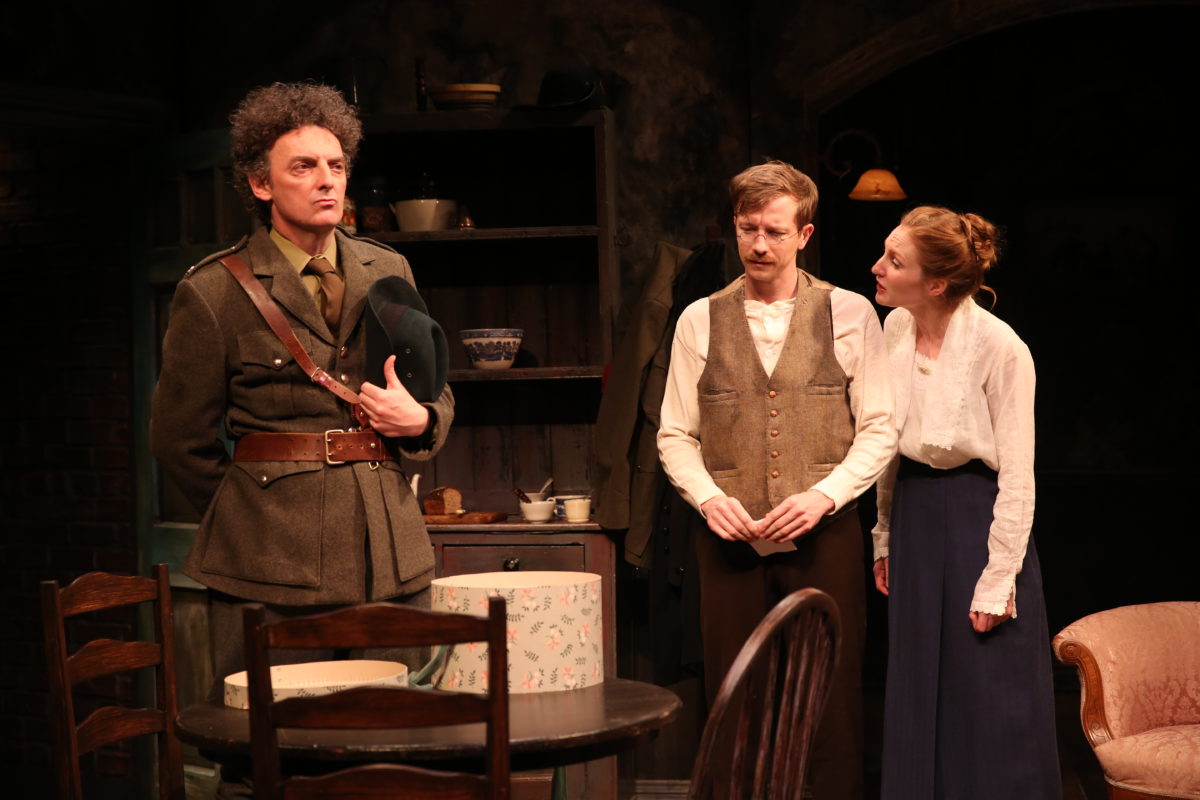 An ensemble of 14 superbly vibrant actors, with accents so authentic-sounding only an Irish Henry Higgins might critique them, bring O’Casey’s powerful tragicomedy, set during the Easter Rising of 1916 against the British, to fire-breathing life. First produced by Dublin’s Abbey Theatre in 1926, it was originally greeted by vehement protesters angry at the playwright’s unconventional views of religion and politics. Those with loved ones lost in the Rising were upset by his dwelling on the pain the conflict caused everyday people in the slums rather than on the mythologized glory of the militant republicans who’d fought and died for Irish independence.

A pub scene featuring the prostitute Rosie Redmond (Sarah Street) juxtaposed against a political speaker in the street outside, as well as the appearance in a mere pub of both the Irish tricolor and the “Plough and the Stars” flag of the working-class Irish Citizen Army, commanded by James Connelly, were considered especially offensive. The eponymous flag is criticized in the play itself for being a communist one employed on behalf of a nationalist cause.

The Plough and the Stars has been a moderately regular visitor to New York since first being brought here in 1927 by the Irish Players, who also offered Juno and the Paycock. Critic Richard Dana Skinner wrote: “It is an account of passion and prejudice, of persecution, of humorous bravery, of reckless audacity and of the meannesses and weaknesses of humanity under the stress of terror,” words that continue to ring true.

In 1988, the play inaugurated the Irish Rep, when, as now, it was directed by Charlotte Moore, the company’s venerable artistic director. Another revival followed in 1997, two of that production’s actors, John Keating and Terry Donnelly, returning for the current staging.

Written in four acts (produced as two, each with two long scenes), each in a different setting, The Plough and the Stars relives life among a vividly drawn group of Dublin tenement dwellers as the city begins to erupt in violence. Over the course of two hours and 15 minutes, O’Casey’s verbose, colorfully heightened prose paints what is more a kaleidoscopic picture of characters and events than a tightly plotted drama.

If any thread could be cited as its focus, it would be that tying together the poor, young Clitheroes, the pregnant Nora (Clare O’Malley) and her bricklayer husband, Jack (Adam Petherbridge). He wishes for a command in the Irish Citizen Army; she, who strives to prettify her dreary surroundings, wants to keep him safe with her. She even hides a letter commissioning him as a commandant.

Eventually, summoned by Capt. Brennan (Keating), he goes off to fight. Later, amid the ensuing rioting and looting, he mistreats Nora, who goes into labor and loses both the baby and her mind. News comes of Jack’s death but it’s kept from Nora. The cantankerous fruit vendor, Bessie Burgess (Maryann Plunkett), who’s been looking after Nora, dies saving her, and the English are victorious.

The play wrings multiple emotions, including ironic laughter, from its constantly squabbling characters, like the rabid socialist called the Covey (James Russell) and the cranky old Peter (Robert Langdon Lloyd); the Covey and the boastful, boozing carpenter and union man, Fluther (Michael Mellamphy); and Bessie and Ginnie Gogan (Úna Clancy), who come to blows in a pub over a perambulator to use for looting.

When the outside conflict turns bloody, these contentious brawlers unite. The voluble Fluther and the curmudgeonly Bessie, who also helps the tubercular young Mollser (Meg Hennessy), demonstrate as much heroism in their way as those in uniforms with guns and helmets.

Making it all work to brilliant effect is Charlie Corcoran’s remarkable set—which also turns the surrounding walls into those of a Dublin slum. With the use of a turntable, he’s able to provide four naturalistic locales: the Clitheroes’ flat; a pub; the street outside the main characters’ residence; and Bessie’s flat, with stairs leading to an upper window. Michael Gottlieb paints the scenes with exquisitely sensitive lighting, Linda Fisher and David Toser offer period-perfect costumes, Ryan Rumery and M. Florian Staab provide realistic sounds of guns and canons, and Rumery creates sensitive original music.

The unusually well-balanced cast contains too many notable performances for them all to be mentioned so I’ll note only the stirring performance of Maryann Plunkett as Bessie. Her death scene, it must be stated, is nearly as extended and detailed as the one Michael Stuhlbarg performs as the title character in Socratesat the Public.

None of what I’ve praised above would be there were it not for the remarkable investment made by director Charlotte Moore. She has made The Plough and the Stars a powerhouse of electrifying acting, helping each actor create indelible verbal and physical images that resonate with feeling and meaning.

It won’t be easy but here’s hoping she and the Irish Rep can do it again in the coming season.