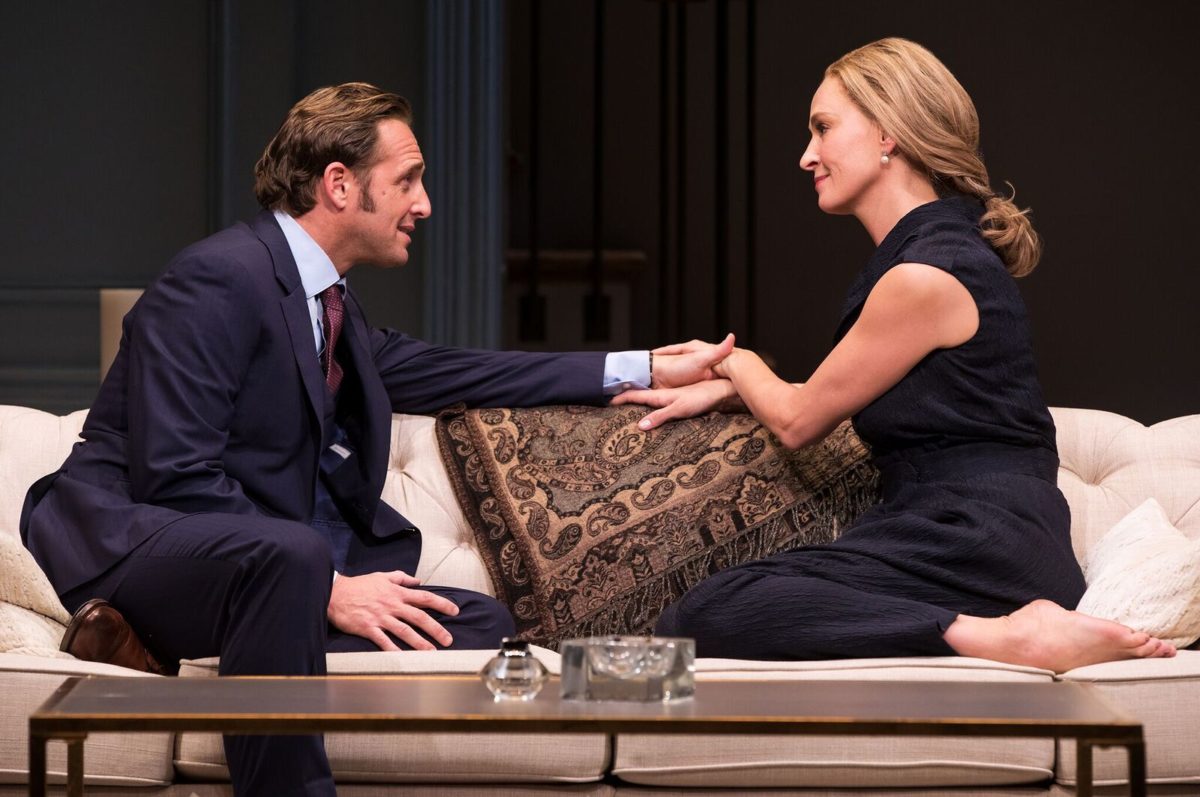 It is jarring to listen to such empty conversation, so falsely spoken. But that is very much the case in this production, a Broadway debut for both Uma Thurman, who plays the lead, and Beau Willimon.

At the center of it, Josh Lucas portrays Thurman’s husband, a tax accountant pushing for a judgeship. In this role, Lucas is a far cry from a man of justice – too handsome and metrosexual – he comes across as a snake oil salesman. It’s his career that is on the line. As his adversary, a Trump supporting banker, Marton Csokas’ Peter is a “jealous ass,” and so dreadfully pompous, we can’t wait for him to lose.

Meanwhile, Blair Brown, portraying the latest Trump appointee, feels like a breath of fresh air by the time she gets on stage. Only to discover, of course, that she is nothing more than an old-school siphon.

In this satire about social climbing politicos in our nation’s capital, the nattering is simply despicable. The pseudo-liberal Chloe issues plumb criticisms of Trump, and the Republican administration. But her quips reveal her utter lack of substance.

The other characters, too, are equally stultified. “I’m standing here, and saying I love you and you just want to put the weight of the world on my shoulders,” a jilted young woman, played by Phillipa Soo, complains. Regardless of who is speaking, barely a word rings true. Indeed, director Pam MacKinnon is at work, holding up the mirror to society during the Trump era.

The action is easy to follow – at first trite and unconvincing, the tale becomes explicitly manipulative and discomforting. Call it what you will – moral turpitude, greed – it doesn’t matter. Success, appearances, the envy of others, all seem to matter.

Pulitzer Prize-winning playwright Ayad Akhtar reveals a similar sense of despair in his new play, Junk, at Lincoln Center’s Vivian Beaumont Theater. Helmed by Doug Hughes, the drama unfolds as docudrama about the junk bond debacle of the 80s.

Akhtar’s fictional tale depicts the crippling deeds of Wall Street’s power brokers, selling debt and building a deficit that is left to hard working Americans to repair. However, if you like I, did not understand the junk bond market then, you are no more likely to understand it after seeing this production.

Why and how it happened exactly seem to matter less than the personalities of the perpetrators. In Junk, Steven Pasquale, boldly imparts qualities of curiosity and mischief into the driven mastermind of the debt trading game.

Still, both plays depict the hubris of our modern demigods – the falseness and dishonesty that define the power structure. And both demonstrate the narcissistic self-serving characters who drive that machine.

Set in the ‘70s, Seth Zvi Rosenfeld’s new play dredges up the depravity of New York City during its bankrupt years. Golden Globe winner Chloe Sevigny delivers an understated portrayal of a junkie, and the mother of two teenage children, all living in a railroad flat in Greenwich Village.

Derek McLane’s set, with shag rugs and an avocado kitchen, faithfully depict the era. And as the apartment is laid out, it creates a horizontal plain that reaches from far left to right. From the audience perspective, it’s an atypical layout, causing us to look at things just a little differently.

As directed by Scott Elliott, the ongoing life is pretty crummy, surrounded by race riots, gangs, and violence – most of which we’re spared from watching. It’s the effect of it all that we experience. “I want to live to 21,” Chloe’s son, nicknamed Pnut (David Levi) insists.

Still, in spite of poverty, illness and addiction, Rosenfeld’s drama offers a flicker of hope. Even as we watch Sevigny’s Mary Shannon nodding into oblivion, we sense that one or two of the young people in this tale, will take a stand. That hatred, vengeance, and murder will not go unchecked.

Altogether, however, these three productions, running simultaneously, show us life in the Trump era, rife with racial hatred, lies, debt, and corporate greed.