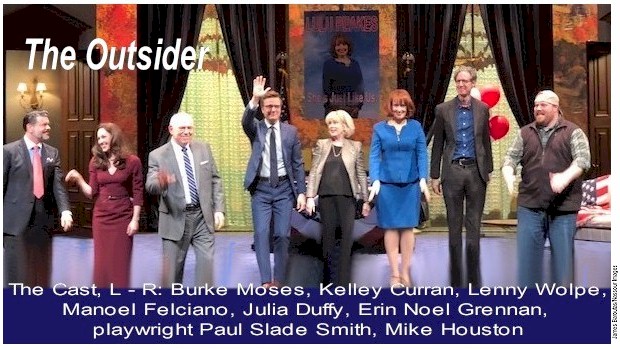 The Outsider premiered in 2015 at Peninsula Players, Milwaukee, where it won a Best Play award. The play is described as “a timely and hilarious send-up of modern American politics, in the midst of a political scandal” and “a razor-sharp satire and an inspirational tribute to democracy.” Smith’s comedy of errors surrounds a governor forced out of office in the midst of a sex scandal and how his lieutenant governor, Ned Newley is thrown into the spotlight. Though the brains behind the governor, he possesses no political instincts and a paralyzing fear of public speaking. At his swearing in, he can hardly repeat the oath of office. He’s quickly perceived as the worst candidate ever – one sure to lose a special election. He has to be made over. Arriving to the aid of his chief of staff are a smart political consultant and a once-powerful national candidate groomer. Add to the mix, the last-available temp to be a receptionist, a TV reporter who’s told to not to ask hard-ball questions, and her one-syllable speaking cameraman. Newley, unknowingly eventually becomes a powerful presence, but, and here’s the clever twist, he’s no longer the worst candidate ever.

Connecticut-native Smith’s play Unnecessary Farce, has received 250 productions worldwide. And get this: as an actor he’s appeared on Broadway in Charlie and the Chocolate Factory and Finding Neverland. In addition, he’s toured in Wicked and Phantom of the Opera and work extensively in major regionals. In a program note about the difficulties of playwrights getting new works produced, he compliments Paper Mill for taking “a gamble” putting his play up and thanks “the incredibly talented cast.”

Good for him. Often we hear actors state, “It’s all on the page.” True, and especially here it’s how actors, collaborating with their director – in this case, the invaluable David Esbjornson, superbly interpret what’s on the page.

Esbjornson, chair of the Rutgers Theater Conservatory and former artistic director, Classic Stage Company, had his deft hand behind the original Driving Miss Daisy, works by Albee and Miller, and the Public’s 2004 premiere of Larry Kramer’s The Normal Heart. He was chosen by San Francisco’s Eureka Theatre artistic directors Oskar Eustis and Tony Taccone to helm the 1991 world premiere of Tony Kushner’s Angels in America: Millennium Approaches and Perestroika.

Smith is doubly-blessed. There’s the gifted ensemble, headlined by Paper Mill favorite Lenny Wolpe, whose career has proven he can do anything. Bumbling comedy seems to be a new addition to his resume, and, here, he bumbles, mumbles, and stutters into one of the best and certainly memorable performances of his career. Wolpe, in his sixth Paper Mill outing [which includes an acclaimed Herbie opposite Betty Buckley in Gypsy], originated Broadway roles in Bullets Over Broadway, The Drowsy Chaperone, and Mayor; and has a long-list of Off Broadway, regional, tour, and TV credits.

He and the play benefit from veteran regional actress [making her Paper Mill and, probably, her East Coast] debut, Erin Noel Grennan as the temp who’s never held down a position for more than a day. She’s highborn to the manor of scatterbrain comedy in the way of Judy Holiday in Born Yesterday and, when it comes to the phone and intercom, the ineptness of Carol Burnett’s Mrs. Wiggins.

As the consultant, welcome back Julia Duffy (Golden Globe and multiple Emmy-nominated co-star of TV’s Newhart , whose last Broadway role was in the 1978 revival of Kaufman and Hart’s Once in a Lifetime). Wolpe and Grennan might get all the laughs, but Duffy, along with Tony nominee Manoel Felciano (Tobias, John Doyle’s 2005 Sweeney Todd revival) as the chief of staff provide the much-needed sensible backbone. Also in his return to area stages is Drama Desk nominee Burke Moses (Gaston, Disney’s Beauty and the Beast) as the eager-to-be powerful again candidate-maker. With his tall statue, bass voice, and swagger, he brings to mind young Orson Welles.

Smith throws in a whiff of romance between the chief of staff and the TV reporter who doesn’t like to be told what to do, tall and slinky (especially in ten-inch heels and body-hugging couture) Kelley Curran (who made her Broadway debut understudying the five female roles in last season’s Present Laughter); and, as the cameraman, Mike Watson (Lee Dixon on Netflix’s Orange Is the New Black; numerous film and TV roles), who in the play’s poignant coda, proves to be anything but the silent type.

While not earth-shaking, The Outsider has many assets. It’s sassy, light, fluffy fun. A vast array of self-flagellating lines by Wolpe and every move by Grennan had the opening night audience in stitches and thunderous applause. With all that’s happening day-in-and-day out in American politics, we certainly can use laughs.