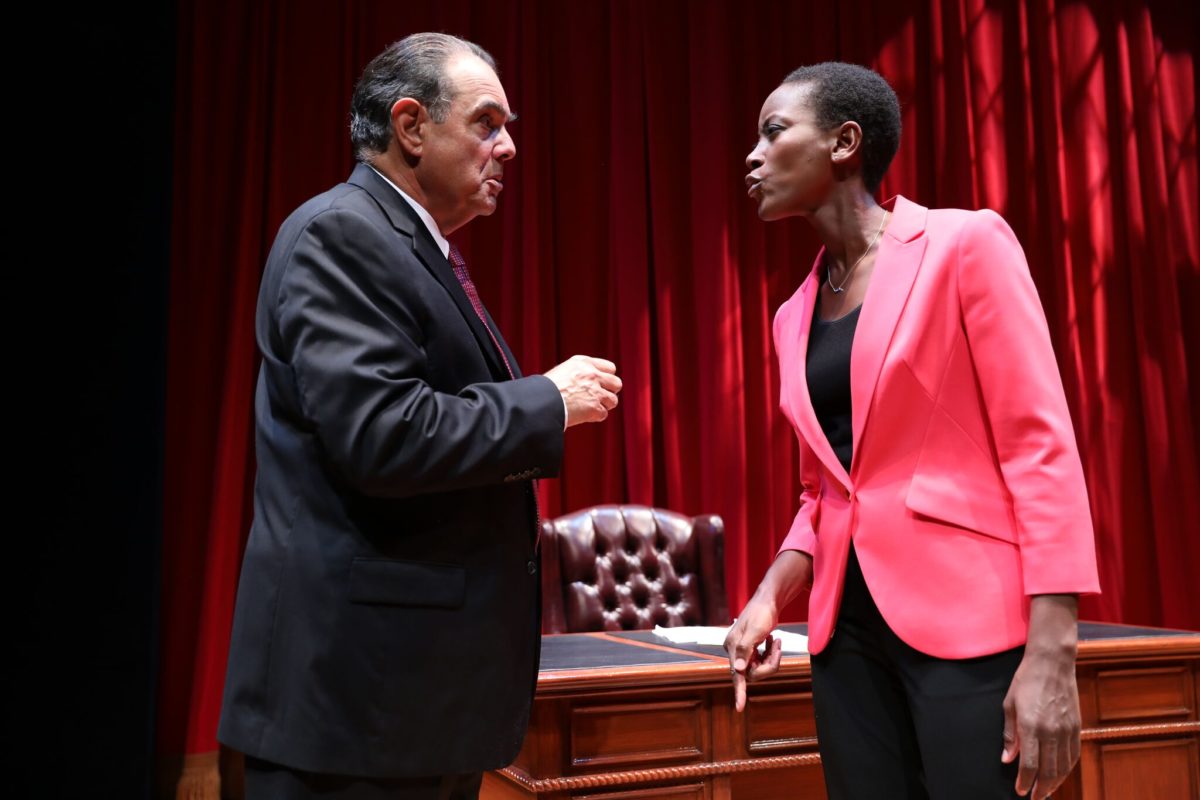 Reviewers often use the expression “ripped from the headlines” to emphasize the relevance of a play’s subject matter to contemporary events. You can practically hear the headlines ripping in this three-character play, snappily staged by Molly Smith, which arrives at 59E59 Theaters three and a half years after its premiere at Washington, D.C.’s Arena Stage. That was in February 2015, a year before Justice Scalia passed away.

Since then, it’s been touring to various cities as its depiction of the polarizing magistrate’s views on our most divisive legal issues grow only more apposite every day, especially with regard to the congressional chaos surrounding the appointment of his successor. The proximity of what’s happening in the news to what’s said on the stage couldn’t be greater.

The Originalist manages, in its schematic way, to dramatize and humanize Scalia via lively, intriguing discussions that press many of the nation’s hottest constitutional buttons. Roe v. Wade, affirmative action, the Defense of Marriage Act, same-sex marriage, capital punishment, gun control: they’re all here, with allusions to many others.

Scalia, who—surprisingly—often made a practice of hiring at least one liberal among his four law clerks, is given one to debate with here in the fictional person of a youthful, attractive, black woman named Cat (Tracy Ifeachor). Not only is she a socialist, she’s also a lesbian, which, conveniently, gives her a dog in the fight over gay marriage.

However, to give her more of a back story, Strand has her deliver expository monologues to her dying father, a college professor, his presence in a hospital bed suggested by unseen beeping machines and an oblong, bed-sized light on the floor. These moments, like those when Scalia teaches Cat how to fire an automatic rifle, open the play up but sometimes come to feel like padding.

A third (and unnecessary) character is another Scalia clerk, Brad (Brett Mack), a supercilious, sycophantic right winger. Brad’s obnoxiousness serves more to glorify Cat’s liberal position than to add much additional substance to the often biting disagreements between the earnest Cat and the dogmatic, arrogant, but gruffly charming Scalia.

The arguments hinge not only on legal technicalities but on judicial philosophy, as per the relative importance of objectivity and emotion in the decision-making process. Also, the shared Catholicism of Cat and Scalia serves to introduce the place of religion in legal judgments.

Scalia’s love of opera inspires some excellent musical background selections (thanks to sound designer Eric Shimelonis) and also offers him an opportunity to analogize opera when explaining his interpretations of the Constitution. Those interpretations, whose literalism as to what he insists the founding fathers’ words intended, are why he, like Brett Kavanaugh, who’s likely to replace him, is called an originalist.

While not a typical biodrama, the play incorporates enough biographical detail to help us know Scalia as a human being, as when he reveals his disappointment about being bypassed by President George W. Bush for the job of Chief Justice, which went to John Roberts. A description of Scalia’s well-known friendship with liberal Justice Ruth Bader Ginsberg also helps soften the often pompously self-satisfied Scalia’s rough edges. And Scalia’s occasional witticisms show his biting sense of humor, even to his frequent toying with his enemies’ characterization of him as a “monster,” a word that runs like a threnody through the dialogue.

It’s unlikely audiences will feel intimidated by the legal debates engaged in; these have been boiled down and simplified for theatrical consumption. What results resembles a well-crafted, dramatized PowerPoint presentation of the well-known issues. At the current moment, these can be viewed as a primer for what to expect in Kavanaugh’s upcoming confirmation hearings. Conservatives will salivate; liberals will seethe. No one will change their mind.

Gero’s Scalia is about as close to the real thing as you can expect of an actor, representing the judge’s extreme self-confidence and yet allowing his vulnerabilities to peek through. Ifeachor’s Cat, however, while attractive and expressive, is lightweight and unconvincing, robbing the production of the balance it requires. She seems more like an ambitious college student challenging her professor than a Harvard Law School grad butting heads with a Supreme Court justice. Mack, in the gratuitous role of Brad, is suitably annoying.

If you’re a newspaper reader and cable news watcher, you’re unlikely to learn anything new from The Originalist. Other things aside, though, even if the abbreviated arguments it offers anger you when you dissent, or frustrate you when there’s more to be said, hearing them sharply articulated by an excellent actor who could be Antonin Scalia’s doppelganger has a readymade  fascination. Which is all the reason you need to approach his bench.