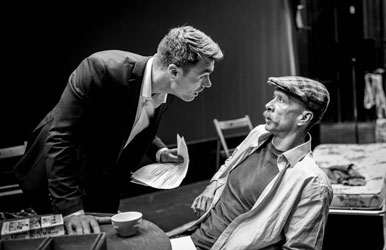 Guild Hall in association with Ellen Myers is presenting a solid production of The Night Alive by Conor McPherson. The play won the New York Drama Critics Circle Award for Best Play of the 2013-2014 season in a premiere production Off Broadway at the Atlantic Theater Company with the same cast that originated the play in London at the Domar Warehouse in 2013 before transferring to New York City. Subsequent productions were done in Chicago and Los Angeles before coming to East Hampton.

Stephen Hamilton has helmed a terrific and intimately atmospheric production on the stage of Guild Hall, where the audience of only 75 sits on two sides of the stage with the actors.  For this unique undertaking Hamilton has assembled an outstanding ensemble of actors led by Kevin O’Rourke and J. Stephen Brantley with featured performances by Tuck Milligan, Molly Carden and Rob DiSario. Their exceptional work and the cozy setting make you feel as if you are peaking from windows into the rooming house in Dublin, where the play is set.

Tommy (O’Rourke), a mature 50 plus regular guy rents a room from his Uncle Maurice (Milligan), who lives upstairs and lost his wife three years earlier from a freak accidental fall on the ice when they were arguing. He wasn’t holding her hand and blames himself. Tommy’s friend, Doc (Brantley), a mentally challenged younger man whose brain functions 5 to 10 seconds slower than everyone else, often shares the room with him. Doc also helps Tommy doing odd jobs moving things around with Tommy’s van, and Tommy sort of looks out for Doc. Neither of them are in any kind of relationship, and they scrape by from day to day until one night.

Tommy rescues a young prostitute Aimee (Carden) from a beating on the street by her boyfriend. He brings her home to help her get cleaned up, but she ends up staying. An uncertain friendship develops between Tommy and Aimee, although Tommy clearly has feelings for the young woman. Over the following weeks a friendship develops between Aimee and the other men in the house. The story, however, turns decidedly dark and explosive when trouble crashes into their lives in the form of Aimee’s ex- boyfriend, Kenneth (DiSario), who comes looking for her.

The story is an unsettling look at five imperfect people attempting to connect in the darkness – like one character says, “It’s like my eyes have been taken out, and I just can’t see what’s in front of me, like it’s always nighttime, so when nighttime really comes, you think it feels like a relief.”

There is a moment in the production where Tommy, Doc and Aimee dance to Marvin Gaye’s “What’s Going On,” which could be an apt description of the character’s fumbling attempts at making connections.

The Night Alive is now playing at Guild Hall through May 22 with performances Wednesday – Sunday at 8pm. For tickets call the box office 631-3244050. Photo Diane DuPuis