February 17, 2022: If anybody requires assurance that Broadway is back they need look no further than the Winter Garden Theatre where (after several Covid-related delays) Meredith Willson’s 1957 Tony-winning hit—the one that snatched the honors from West Side Story—is rousing audiences with a smashing revival starring a sensational Hugh Jackman and Sutton Foster. While I’ve often responded less positively to some shows than my more enthusiastic colleagues, in this case I must respectfully disagree with the cadre who have been underwhelmed by what I deem director Jerry Zaks’s memorably spirited new production. 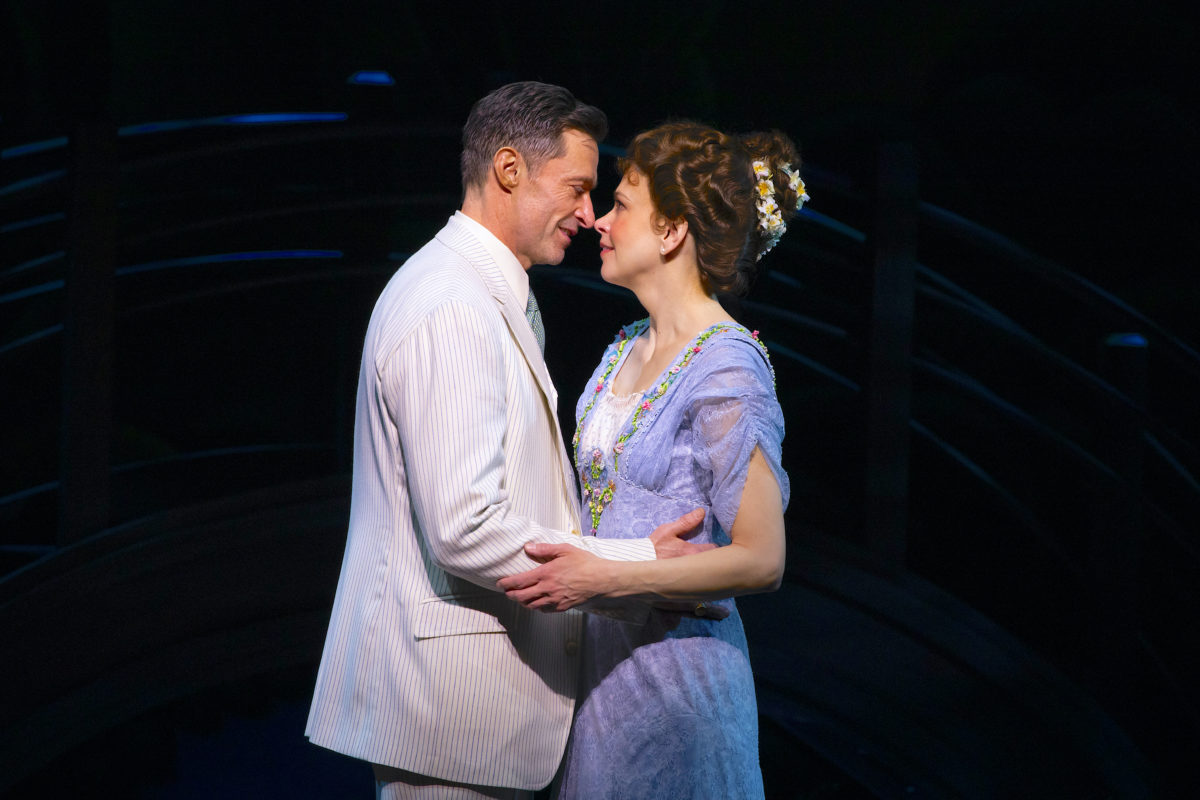 February 17, 2022: If anybody requires assurance that Broadway is back they need look no further than the Winter Garden Theatre where (after several Covid-related delays) Meredith Willson’s 1957 Tony-winning hit—the one that snatched the honors from West Side Story—is rousing audiences with a smashing revival starring a sensational Hugh Jackman and Sutton Foster. While I’ve often responded less positively to some shows than my more enthusiastic colleagues, in this case I must respectfully disagree with the cadre who have been underwhelmed by what I deem director Jerry Zaks’s memorably spirited new production.

The Music Man, just to get its story out of the way for those who aren’t familiar with the show or its 1962 movie, tells the tale of super-salesman Prof. Harold Hill (Jackman), a slick con man who, despite having no musical training, uses the gift of gab to sell musical instruments and band uniforms to the parents of small-town kids, pretty much the way a revivalist preacher might inspire people to talk in tongues. Its premise, based on Willson’s own boyhood in Mason City, Iowa—here called River City—is that Hill has left a trail of disappointed towns behind him, having flown the coop after selling his goods without fulfilling his promise to teach the kids a single note.

Before there’s even the toot of a trombone, he’s got the townspeople in a musical fever, including Eulalie Mackecknie Shinn (the splendid Jayne Houdyshell), wife of the malapropistic mayor (a comically sputtering Jefferson Mays), who has his own reasons for wanting Hill kicked out of town. Four town leaders are deployed to dig up dirt on Hill, but he masterfully turns them into a quartet, barbershop style.

Hill’s biggest obstacle is the spinsterish, skeptical librarian and local music teacher, Marian Paroo (Sutton). Marian lives with her Irish-brogued mother (Marie Mullen, getting some big laughs), anxious for Marian to find a man, and her kid brother, Winthrop (Benjamin Pajak, a singing and dancing imp), socially repressed because of his lisp. Thrilled by the glowing effect on Winthrop of Hill’s fatherly ministrations—cynically employed to gain Marian’s favor—she abandons her efforts to expose Hill, and before long the two are singing about never having heard the bells on the hill ringing until “there was you.”

Once all hurdles have been cleared, we’re ready for the amusing surprise of hearing the town’s children—where does Broadway keep finding such amazing young talents?—offer their adorably tuneless rendition of “Seventy-Six Trombones” to the gushing approval of their parents, followed by the song’s heart-thumping curtain call reprise. In 1957 critics were taken aback when the audience began clapping along to the curtain call, something now so common as not to warrant any comment.

The Music Man is occasionally as corny as Iowa in August, but it also has so much verve, wit, and musical charm, and is performed with such remarkable panache that it’s hard to resist, whatever quibbles you may have about this thing or the other. The music, much of it in rhythmic, rapid-fire patter style—like “Rock Island,” the brilliant expository opening number showing salesmen on a train, often seems like an incipient version of what would later be called rap. And, much of it, like Hill’s tour-de-force “Ya Got Trouble” (because of pool in River City, of course), isn’t even rhymed.

Apart from reservations about the production per se, some seem disgruntled because of the notoriously high price of tickets, which, it’s true, put the show—for the moment, anyway—out of reach for so many who can’t afford the box office price of $450 for orchestra seats, if they can even get them. An online search for last minute-tickets revealed orchestra seats available for the Wednesday matinee at prices I won’t even bother to repeat, a price only those with the deepest pockets or the most extravagant expense accounts can afford.

Other objections are to what one must agree is the unnecessary whitewashing of some lines, altering anything that might somehow trigger those ticket buyers with woke tripwires. This kind of thing continues to go too far in our PC-obsessed society, as a recent article in the New York Times made clear. Another drawback detected by some critics concerns whether the show is too cheerfully upbeat, missing the darker significance of Hill’s corruption.

None of these critiques prevented me from having the best time yet at any show I’ve seen during this somewhat truncated season. I enjoyed every second of this golden resuscitation from Broadway’s golden age, a show that, despite what was considered even in 1957 potentially old-fashioned, was so freshly conceived that it wowed every critic and ran for 1,375 performances. Thirty-nine-year-old film star Robert Preston, who’d never done a Broadway show, and wasn’t a trained singer or dancer, carved out a new, midcareer path as a Broadway musical star, and 30-year-old Barbara Cook took another step on her own path toward Broadway glory.

Preston and Cook’s vocals are preserved on the original cast album, where one can hear her lilting soprano and his skillful ability to use his rich speaking voice to both speak-sing his big patter numbers and carry off more melodic tunes in songs like the quirkily offbeat “Marian the Librarian.” But, while both could move nicely enough, neither was really a dancer. One source says “Preston’s dancing was actually faster to close walking.”

Not so with the remarkably gifted Jackman and Sutton, both of whom are superb dancers and sterling singers. As the song says, these two are “the finest virtuosos.”  Jackman, as lithe at 53 as a man 20 years his junior, plays Prof. Harold Hill with a display of charismatic showmanship that makes you marvel at his theatrical electricity. His abilities clearly inspired choreographer Warren Carlyle to use him in multiple dance routines, while his vocal abilities see him singing more of Willson’s lyrics than did Preston.

Meanwhile, the 46-year-old Foster, as librarian Marian Paroo, the obstinate spinster who succumbs in spite of herself to Hill’s attraction yet causes him to abandon his shifty ways, has a mezzo voice nothing like Cook’s soprano. It helps make her sound more like a firmly grounded woman than a sweet-hearted ingénue. Like Jackman, she dances as well as she sings. By the time the “Seventy-Six Trombones” curtain call rolls around, some may wish she’d been given even more dance chances. Worry not. Zaks and Carlyle use the moment to display her and Jackman’s tap-dancing technique, with the pair smartly dressed in white band leader costumes.

Both stars are considerably older than their originals, but they have enough youthful brio to carry it off. On the other hand, if there’s one thing that might have been adjusted in this regard, it’s the too noticeable age discrepancies between Marian and her mother, made up to look more like her grandma, and between Marian and her brother, who looks no more than 10.

But why quibble about this consistently admirable, attractive, and appealing revival of Willson’s first Broadway musical, for which he wrote the music, lyrics, and book, the latter shared with Franklyn Lacey. There are only a few numbers that can be called standards in the show, Hill’s “Ya Got Trouble,” “Seventy-Six Trombones,” and the exquisite “Till There Was You,” although a few others, like “Gary, Indiana” and “Goodnight Ladies,” also maintain their familiarity.  But every number is a standout when you see them invested with the magic of life through Zaks’s perfectly paced direction combined with Carlyle’s imaginatively conceived, acrobatically daring choreography, which often captures dance styles of the time, like the cakewalk. Young dancers Gino Cosculluela and Emma Crow, as Tommy Djilas and Zaneeta Shinn are standouts.

There aren’t 76 performers in the show, but there are over 40 vibrantly vigorous actor-dancer-singers, dressed to the nines in master designer Santo Loquasto’s brilliantly reimagined costumes of small-town, 1912 America. And with all of it presented in Loquasto’s nostalgia-imbued, Grant Wood-inspired sets of Mid-West Americana, supplemented by a drop representing the side of a huge red barn, your eyes will have a feast like that served up for your ears by Willson’s score.

So, scrubbed clean of anything that might offend the supersensitive, costing as much as a cross-country flight, and, in some views, lacking the chiaroscuro of darkness mingled with light, The Music Man still comes out a winner. How could it not, with its innate musical and theatrical values, its superlative production, and the presence of two of our finest virtuosos?