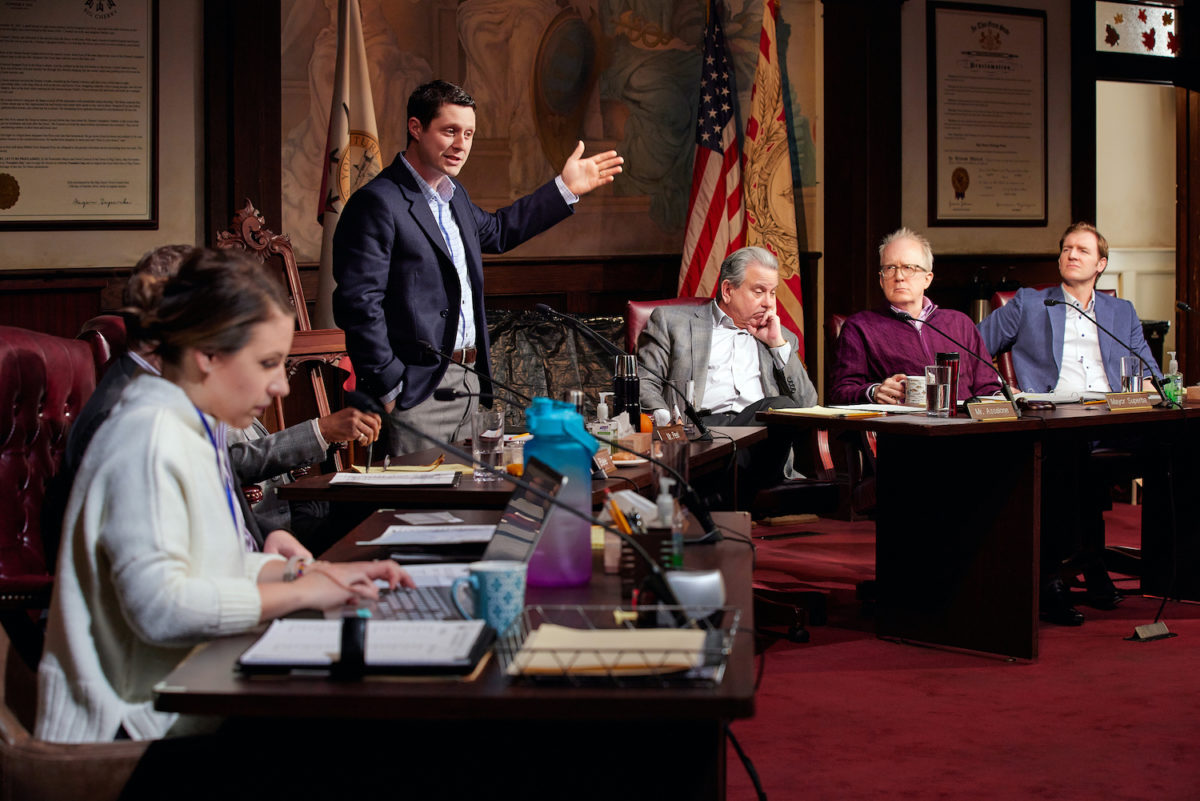 Beyond self-aggrandizing, it’s not at all clear why the Mayor’s name is a play on the word superb, since he himself is not especially that.  More importantly, if history is in the making, if it’s “a verb” in that sense, then the truth is how we create it. We could invent it – that would lead to fake truths, and fake news.  We could improve it – that could lead to inclusiveness.

About those double meanings though, they are tricky. Most importantly, the name of the town Big Cherry derives from a racial slur about Native Americans and black people. But the name stuck, suggesting the sweetness of maraschinos – preserved, bleached, dyed, and sweetened with sugar.

To boot, the majority of city council members are equally obstructive to the truth. Mr. Oldfield, obviously aged, not to mention insanely self-involved, coyly has no memory at all. Speaking in non sequiturs, while fighting over a parking spot, Austin Pendleton lands every line with acidic humor. He literally throws them away.

Then there is Mr. Breeding – he is an oddity – tall, gangly, creepy, and full of hatred. He instantly fits the shoes of too many right wing Republican Senators to name just one.

However, it doesn’t take two words to describe Mr. Blake.  Should you require them, the words are Uncle Tom. “I have to wait to see which way the wind blows,” he affirms, knowing full well that it blows in the direction of a lynching. Also, he’s a drunk – enough to make anyone wonder how he got onto the city council, other than by affirmative action.

Indeed, Freeman is a fierce actor. Driven by his comic timing, the play’s early scenes move quickly and intensely.

Arriving at the city council meeting, Blake finds the new council member Mr. Peel (Noah Reid) in the midst of an utterly banal conversation with the wise, albeit closed mouth clerk. As portrayed by Tony Award-winning Jesse Mueller, even the subservient Clerk prevails with a stronger sense of character than many of the elected officials we meet here.

In his Broadway debut, Reid (“Schitt’s Creek”) delivers an eye-opening performance as the honest man among a den of corrupt council members. It is a fine ensemble, befitting a production which brings to mind “Twelve Angry Men,” and the role made famous by Henry Fonda.

Danny McCarthy as the guy who stirs the pot in the first place, brings a hearty sense of Irish heritage, and humor to the role of Mr. Hanratty. From the beginning, his proposal to provide more than hand rails for the disabled to sit by the water fountain in the park, had hit a sour note.

Indeed, the need to provide injustice is flagrant here. Even the one young woman on the council, Ms. Matz portrayed by Sally Murphy, is so stereotypically ditzy that she serves only to stir confusion. An agitating Blair Brown plays her older colleague, Ms. Innes – so lame a hypocrite that even the Mayor despises her.

Finally, Councilman Peel enforces his right to read the minutes from the last meeting, when Mr. Carp (Ian Bradford) had spoken. Bradford is powerful as the righteous politician who announces the town’s history of colonization, and along with it exposes the shenanigans in city governance, with Councilman Assalone (Jeff Still) as chief culprit.

There isn’t much more one can say about Assalone that isn’t established by his name. Indeed, a lot of what is said in Letts’ comedy mystery amounts to establishing the political point of view, more than establishing the dramatic action. As it happens, a supposedly surprise ending is dramatically ambiguous.

Carp’s criticism of his fellow council members is not meager, after all. To the contrary, he drives directly into the heart of the matter. That the characters end up with blood on their faces, works as metaphor. But as storytelling, the savageness of their behaviors does not change who they are.

Lying, covering up for lies by creating new lies – history, as we have written it – derides many and divides all. The ambiguity of the play’s ending may be a mirror to that which prevails as transparency. As directed by Anna D.Shapiro, all interpretations hold their own. Directing the play for its didacticism, is indeed her wont. Building an acting ensemble is clearly her forte.

David Zinn’s scenic design expresses a flag waving love of small town America. But what is exposed is the shame of its denizens when confronted with facing themselves.