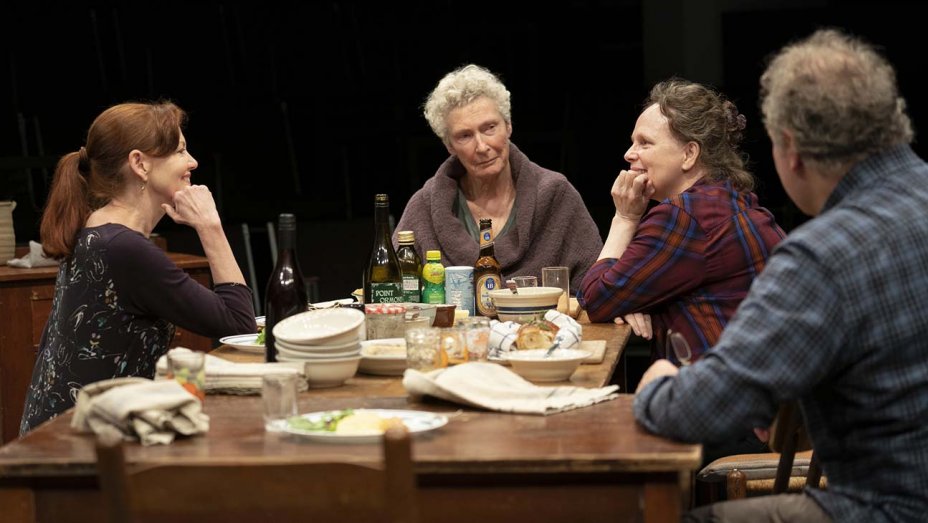 The beauty of Nelson’s work, his parody of dramatic realism, is at its finest in this production. As the play opens, Kate delivers the props, and sets the stage – the dinner table, while David Michael describes the actors in a play setting the stage.

In this new work, subtitled Conversations During Difficult Times, currently at Nelson’s theatrical home, The Public Theater, the conversation is about dance and how it can be about “human movements. Not artificial ones.” Rose Michael, a choreographer, and the central character, creates dances with simple actions, based on mundane tasks, such as vacuuming, carrying a jug of water, and cooking.

At the same time, the drama on stage focuses on “normal human movement,” namely the twists and turns of the psyche. It’s how we react to our most pressing issues, and problems. While the play is a reflection on death, it also talks about immigration, the Klansmen, women-owned dance studios, and a man described as “Fat. Funny colored hair. A total clown. With tantrums and hamburgers… Grabbing at girls’…” It’s the kind of everyday conversation with which the playwright is obviously familiar.

Brought together by the dinner, the event expands into a dance performance, underlaid by conversation, reminiscences, and observations mostly about Rose. In this role, Brenda Wehle gives a mesmerizing performance as the retired choreographer, nearing the end of her life. Like the Obie-Award winning Wehle, Rose has lived a daring artistic life, about which she is both proud, and embittered.

When her obstinate denial of illness leads to a willingness to let go, however, her dependency on others becomes another challenging situation. The mundane tasks she had choreographed become responsibilities others must perform for her.  As for Rose, a demanding nature is her signature. She’s also thorny, and egocentric, albeit brilliant, and very tuned in to the people around her.

As a director of his own work, Nelson paces the production dramatically, like the soup simmering on the stove top. Even though the characters are facing an urgent situation, the conversation is ambling, the actors speak in whispers. Tensions often rise from them playing the opposite of the situation.

Rose’s daughter, Lucy, is especially troubled. Devoted to learning all of her mother’s dances so she can carry on in her footsteps, she lives to please her perfectionist mother, to carry her torch, and to fulfill a sense of promise. Here, Charlotte Bydwell dances beautifully while delivering a sensitive character portrayal.

As his wont, Jay O. Sanders (David), Rose’s ex-husband, and her producer makes the everyday a little bit unforgettable. His understated manner, and natural demeanor bring the seemingly mundane to life easily, yet vividly.

Like Sanders, Maryann Plunkett (Kate) has appeared in Nelson’s The Gabriels, and The Apple Family Plays. Here, as a crusty retired teacher, and vulnerable caregiver, she faces a conflict between her desire to fulfill herself, and the demands others are suddenly making on her. In this respect, she carries the weight of the drama.

The others are, in one sense or another, dancers. As a performer from Rose’s old company, Haviland Morris is dainty, and beguiling. Matilda Sakamoto is fetching as the daughter of Rose’s indigent sister. She also performs one of Rose’s works. And Rita Wolf as Rose’s former dancer now married to her ex-husband, David, can gives us cause to feel a bit agitated at times.

As with Nelson’s previous family dramas, The Michaels is set in Rhinebeck NY. Jason Ardizzone-West’s scenic design of a country kitchen is set into the three-sided stage with the audience in tiers above it. The choreography, based on works by the legendary Dan Wagoner, is delightful. Accompanied by beautiful music, especially Katie Herzig’s Best Day of Your Life, the production is graceful. As with the best dances, it helps us look inward.